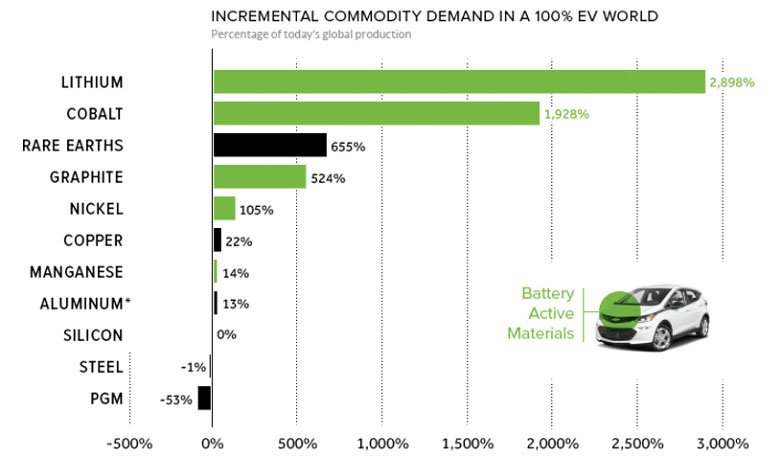 Lithium-Powered Cars are the Fastest Growing Segment in Transportation!

My name is Tom Beck, founder of Portfolio Wealth Global, which was ranked the top free financial newsletter in the world for Q1, Q2, and Q3 of 2017.

I was told the reason for this is that we were able to research and publish suggestions on 4 companies that gained an average of 203.7% in 9 months.

I use the same methodology for picking stocks as I do with building businesses – I look for the right people and the most obvious trends. That’s exactly how I was able to launch 3 separate multimillion-dollar businesses between 2006 and now.

The trend couldn’t be more concise and definite. As the global population grows, and for the first time in human history becomes more than 50% urban, pollution will be a major cause for disease in metropolitan cities, putting a drag on healthcare systems, work commuting, real estate prices, and irregular weather phenomena.

Governments are taking great measures to limit gasoline consumption, and it’s only going to intensify.

But the reason why I’m putting Bearing Lithium (TSX-V: BRZ & US: BRGRF) at the top of the list of lithium companies is that I don’t have to complicate my evaluation of long-term growth for lithium-powered cars – this investment is a 6- to 12-month holding in anticipation of a takeover for 3 times the current price, as I see it.

Looking closely at their balance sheet and near-term obligations, it’s one of the most solid financial companies in the junior mining sector.

They have CAD$3M, and with warrants in the money, that’s going to reach CAD$6M. There’s ZERO debt, and the Maricunga project is being advanced with zero costs to Bearing Lithium (TSX-V: BRZ & US: BRGRF) whatsoever.

Again, going forward, BRZ’s joint venture partner on Maricunga, the world’s highest-grade pre-production lithium brine asset, will put up all the cash needed to get it to what I call 'takeover-ready.' 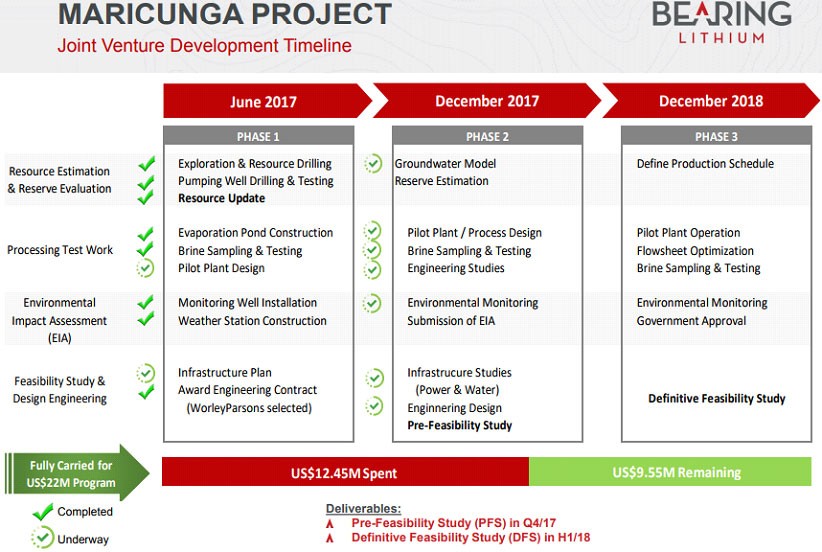 This is the roadmap President and CEO Jeremy Poirier and I went into detail about over the phone.

Because Mr. Poirier has already sold his previous company into a partnership with EV leader, Elon Musk’s Tesla, it’s clear that Jeremy knows exactly how to plan out a takeover timeline.

As you can see, by June of 2018, 9 months away, the Definitive Feasibility Study will be completed and the true economic and technical performance of the Maricunga project will be known to all prospective bidding parties.

Until then, Bearing Lithium (TSX-V: BRZ & US: BRGRF) will watch its JV partners spend CAD$22M on the Maricunga project while they remain free of any obligation.

This means there's no dilution to us, as shareholders, at all. Avoiding the issuing of new shares or raising debt while growing a company to potentially triple the size is how Bill Gates managed to become the world’s richest man. It’s the key to huge gains in natural resources, and Jeremy Poirier negotiated this JV in a masterful manner.

⦁ The most undervalued company of its kind out there.

⦁ Loaded with cash, with no debt and JV partners who will spend the remaining CAD$22M until the Definitive Feasibility Study. In other words, there's no dilution to shareholders.

⦁ Led by Jeremy Poirier, which I put in the top 5 young CEOs of the natural resource sector. He has already flipped his previous lithium company and has the tools to repeat this in the next 6-12 months.

The insiders will have a total of 16% of outstanding shares by next year, and having that much skin in the game is precisely what we want to see from management.

I’ve saved the best for last because it’s important to understand that Maricunga sits at the heart of the lithium capital: Chile.

All existing lithium currently being mined is sourced either from brines, for which Chile and Argentina dominate global production, or hard rock conventional mines, for which Australia dominates global production. In comparison of the two, brines are easier and less capital-intensive to explore and delineate resources, can have shorter time frames to develop, and have lower operating costs once in production.

It’s a world-class asset, and we can own part of it as shareholders of Bearing Lithium (TSX-V: BRZ & US: BRGRF).

This is a time-sensitive alert, and the timing is critical with this set-up.

I want to show exactly why today’s price is an incredible 66% discount to what I see as the highest-priority lithium takeover target anywhere in the world.

⦁ The Lithium Market: All major car manufacturers are already planning 20 years ahead, and with urbanization of Asia at full swing, government regulation regarding fossil fuels will make electric cars more dominant than gasoline ones – it’s a fact.

⦁ The Lithium Market: All major car manufacturers are already planning 20 years ahead, and with urbanization of Asia at full swing, government regulation regarding fossil fuels will make electric cars more dominant than gasoline ones – it’s a fact.

Volvo is moving towards phasing out conventional engines. Volkswagen says it needs “40 gigafactories by 2025.” BMW, Jaguar, and Tesla are all in a race to secure lithium supply – it’s the metal that powers the batteries for EVs.

⦁ Jeremy Poirier: Remember that name because we’re going to be making money with his companies for decades.

It’s very difficult to do a deal as a publicly-traded company with a large-cap player for a premium, but he has already done that once before with Pure Energy, a company he has partnered with none other than Tesla on!

Now he plans to repeat this exit strategy, and I want us to be right there when they cash the check.

⦁ The Project: I have spoken with three of the world’s top lithium experts, and they’ve been following this company’s progress for months. One of them even told me he has a sizable position. The other two didn’t want to disclose to me because they are reputable people and don’t want their holdings shared with the public, but I can tell you that those who understand the economics behind a solid lithium project are taking action right now.

This is the highest-grade lithium brine pre-production project in the world! Its grade is 2-4x higher than any of the Argentina projects.

Never base any decision off of our advertorials. Portfolio Wealth Global stock profiles are intended to be stock ideas, NOT recommendations. The ideas we present are high risk and you can lose your entire investment, we are not stock pickers, market timers, investment advisers, and you should not base any investment decision off our website, emails, videos, or anything we publish.  Please do your own research before investing. It is crucial that you at least look at current SEC filings and read the latest press releases. Information contained in this profile was extracted from current documents filed with the SEC, the company web site and other publicly available sources deemed reliable. Never base any investment decision from information contained in our website or emails or any or our publications. Our report is not intended to be, nor should it be construed as an offer to buy or sell, or a solicitation of an offer to buy or sell securities, or as a recommendation to purchase anything. This publication may provide the addresses or contain hyperlinks to websites; we disclaim any responsibility for the content of any such other websites. Gold Standard Media, owned by the same individuals as Portfolio Wealth Global, has been compensated directly by Bearing Lithium Corp two hundred and twenty five thousand dollars for online marketing. Please use our site as a place to get ideas. Enjoy our videos and news analysis, but never make an investment decision off of anything we say.

Be an insider of the Lithium Sector and stay well ahead of the game!

Get the Exclusive Report on how to profit from Lithium now!