The FED Won’t Taper – Bet On It

Think about waking up tomorrow and seeing $20,000 added to your bank account. When the federal government spends $7tn in the first eight months of 2021 (over $3tn of it by deficit spending), you should wonder to yourself where all of this money is going. Why doesn’t more than $1,200 of it end up at one’s disposal?

If the Federal Reserve’s balance sheet has exploded by trillions in 2020, where has money gone? 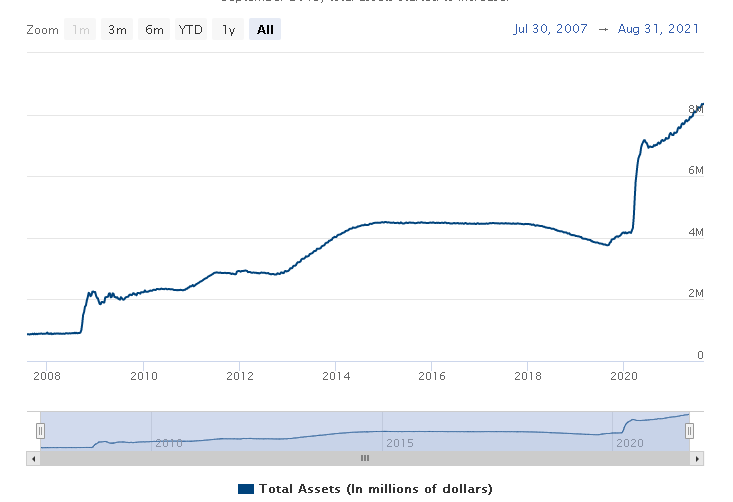 This chart, which I just pulled from the central bank’s website, shows you its balance sheet after the financial crisis of 2008. Free-market entrepreneurs, who complained then that the FED had $2tn in assets, can now only dream about those days, since the bank just expanded its balance sheet by over $4tn in no time.

Between August 2008 and September 2011, a timespan of over three years, when the FED and Washington were getting aggressive with their bailouts, currency in circulation increased by just over 12%.

Fast forward to February 2020 and currency in circulation has increased by 22% in half the time.

This is a very different bailout than the one of 2008; back then, as opposed to 2020, there were clear wrongdoers and the concentration of aid packages was targeted.

Direct payments have been sent to citizens three times already, yet millions of households lost their jobs and will probably never work again.

As you can see, without federal assistance, poverty will increase severely, because unlike many other parts of the western world, Americans barely save.

To be clear, this phenomenon is unique to the United States; such hand-to-mouth poverty for people who have been working throughout their adult lives is not common in Europe.

We can’t see how the government will be able to stop helping such a large group of people on assistance; we’re talking about over 10 million people who are one week away from losing everything!

In other words, we believe another package, whether one that creates jobs or one that extends aid, is coming.

Of course, because currency in circulation has increased by $4tn in just 18 months – a rate of over $200bn a month – money is flowing to the stock market and is experiencing its best year in the past century, in terms of the number of new all-time highs on an annualized basis!

In 2011, gold bulls realized that QE doesn’t translate to currency in circulation, per se. They understood that if banks retained currency on their balance sheets or loaned it back to the FED, this currency wouldn’t trickle down to Main Street. In fact, currency supply increased at about 5% a year, during the period of 2011 through to 2020, while it only rose by 4% in the three years between 2008 and 2011.

A recession slows and even shrinks supply in circulation, but it looks like the bankers overdid it this time around, since it has risen by 15% on an annualized basis. Therefore, as the recovery continues, we believe the currency in circulation will actually average 8% to 10%, which is double its pace in the past decade, resulting in much higher inflation.

On your marks, get set, GOLD (and silver)!

We are not securities dealers or brokers, investment advisers or financial advisers, and you should not rely on the information herein as investment advice. We are a marketing company and are paid advertisers. If you are seeking personal investment advice, please contact a qualified and registered broker, investment adviser or financial adviser. You should not make any investment decisions based on our communications. Examples that we provide of share price increases pertaining to a particular Issuer from one referenced date to another represent an arbitrarily chosen time period and are no indication whatsoever of future stock prices for that Issuer and are of no predictive value. Our stock profiles are intended to highlight certain companies for your further investigation; they are not stock recommendations or constitute an offer or sale of the referenced securities. The securities issued by the companies we profile should be considered high risk; if you do invest despite these warnings, you may lose your entire investment. Please do your own research before investing, including reading the companies’ SEDAR and SEC filings, press releases, and risk disclosures. It is our policy that information contained in this profile was provided by the company, extracted from SEDAR and SEC filings, company websites, and other publicly available sources. We believe the sources and information are accurate and reliable but we cannot guarantee it.