BACK FROM THE UNDERWORLD: Bitcoin Soars, Cryptos TAKE-OFF!

Things are moving forward with full force right now and cryptocurrencies are trading up with each passing minute. I don’t think we’re heading into any sort of mania, but there is definitely an indication that the BOTTOM IS IN.

Portfolio Wealth Global actually sees price volatility as detrimental for the rapid progress of Bitcoin and of cryptocurrencies, in general. Low volatility and stability are keys to mass adoption, going forward, not another 2017.

We were among the first to ride the mania on the way up – and I will be there again when the time is right; you can bet on that, but I don’t expect anything like 2017 ever again. Early on, when I understood that a wave of interest was entering this tiny, obscure, and underinvested neck of the woods, we were there to see some major winners.

But the mania is a stand-alone event. Just like in the Dot.Com boom, people found internet stocks invincible, and they did the same mistake with altcoins. Starting in 2001, REAL technological breakthroughs were needed in order to get valuations higher for internet stocks, and it will be just like that for cryptocurrencies – only the best will live to see another day.

Volatility will not intrigue the new cryptocurrency and blockchain investors. If anything, what’s really popular right now are the Stablecoins, which, by definition, attempt to be the opposite of what initially drew speculators to this industry – wild price swings.

It doesn’t end there, though: as with any retail-oriented product, the future of these technological coins depends on their ability to be used with simplicity.

The amount of daily transactions using PayPal, credit cards, and other mediums of exchange is absolutely unbelievable.

We’re reaching a “Big Bang” moment. In the days after the Dot.Com bubble burst, entrepreneurs realized that nothing about the revolutionary nature of the internet had truly changed. It was still there, with all of its potential and they got working on exploiting it to kill brick-and-mortar mentality.

The same truism holds in this case.

I do not foresee everyday usage of cryptocurrencies replacing the world’s major currencies, especially those of orderly westernized countries. The primitiveness of exchanging between the dollar and, say, the local currency of Honduras when travelling or doing business there is obvious. That’s where cryptocurrencies will thrive – the corrupt nations, the risky ones, where the problems of banking are out in the open. Don’t forget that Africa is the fastest-growing economic region in the world.

In 5-10 years, the industry will have totally changed – I guarantee it.

I want you to look at this incredible chart: 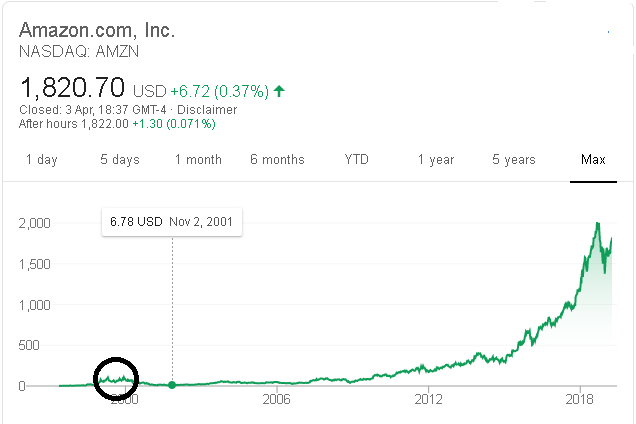 Circled in black is the impact of the Dot.Com bubble run-up on a company that did not falter, fold tent, or shy away from the limelight when its stock went from $300 to $6.78. It’s tiny, in retrospect, almost insignificant.

The same will happen here. There are seriously talented people who are passionate about digital currencies and are disruptors.

The next Amazon, the stock that goes from $6 to over $2,000 is out there. Finding it requires following the clues of successful tech investing, which begins with tracking down company-builders, winners.

Crypto is not dead at all. It’s just not about to surge and make a colorful comeback into the stratosphere, either.

Instead, look for REAL developments – that’s where profits will be created.

Of course, owning some Bitcoin doesn’t hurt. We’ve talked about the bottom multiple times in our interviews on YouTube and have released several of them, pointing out that $3,200 is a great entry point from a risk/reward perspective.

Right now, after a 55% move in two months, my eyes are focused on the alternative blockchain investment paths – I’m about to release some big-time news.