The reality is that hundreds of millions of individual investors out there can’t keep up with the S&P 500. They look for shortcuts, since doubling their money every eight years, on average, isn’t good enough. They want thatsecret sauce, a formula, which can turn $1,000 into $1,000,000 in no time, so they purchase courses or education, which claims to achieve this goal.

There is no such thing – what investors, like these, are really attempting to do, is bridge the gap they created in their own lives, concerning their current financial situation and where they want to be.

They assume that taking more risk equates to yielding bigger returns, but if that nonsense were true, then it wouldn’t be riskier…if bigger risk leads to higher returns, then what’s the risk?

Don’t argue with the facts and the numbers, which consistently favor dividend investing over most other types of investing – if you do, it is at your own peril.

Some companies have been paying out dividends to their investors for over a century. When companies consistently raise their dividends on a percentage basis, year after year, while at the same time, growing the business, it is a stock, which, for the right price, can beat the index, the hedge funds, and it will make you richer over time.

No matter what the Treasury interest rates have been in the past, and despite all market conditions, dividend investing has consistently been a winning method. In other words, this strategy is one of the only constants when it comes to investing.

Over time, as you will notice in the chart below, Dividend Aristocrats (companies that raise their dividends for 25 consecutive years or more {only 52 exist}) outperform the market as a whole (represented by the S&P 500):

Dividend Aristocrats rebound much quicker compared to the overall market. Stock market investors cannot avoid volatility altogether, but the effects of market fluctuation can be mitigated by investing in great, time-tested companies that not only pay out dividends, but also raise those dividend payments on a consistent basis.

Reinvesting dividends has been my ticket to wealth. At any stage of life, dividend stock investing is just a safe and smart way to allocate one’s financial resources.

Only a company that has plenty of capital, generated by their excellent business model and competitive moat, can afford to reward its shareholders with cash payouts on a regular basis. 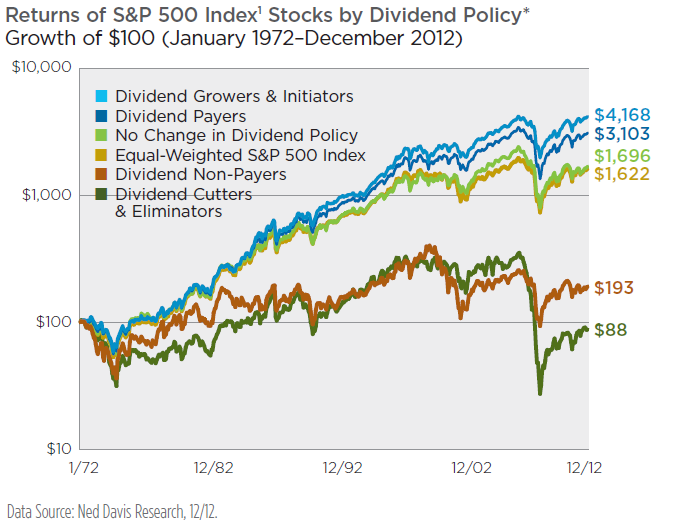 Dividend payers outperform over time compared to dividend non-payers and dividend cutters. Even better than dividend payers are dividend growers—those companies that increase their dividend payouts (in percentage terms) on a consistent basis.

Make this the core of your portfolio as I have.

Once you have this mastered, you can take risks, which won’t be detrimental to your overall portfolio.

For example, last year, I took the yearly dividends from my AT&T position and instead of reinvesting them in more shares of the company, I bought Bitcoin. It turned out to be an incredible winning strategy, but even if I’d done it at $20,000, seeing my investment fall by over 50%, nothing would have happened to the AT&T position, which keeps paying dividends.

Build your foundation first. Then, furnish the house. Foundations take years; furnishing takes minutes. The same is true in the markets. If you construct a sound portfolio, only then extending your reach to speculative trades, you’ll have a stepping-stone, which will serve you throughout a decades-long career.

No doubt about it, the RATIO is shrinking. After peaking at 123:1, silver has BEGUN what I refer to as the GREAT REVERSAL.

This will NOT BE a straightforward speculation, that’s FOR SURE.

No one trusts the rally, but SOMEONE IS CERTAINLY buying: the S&P 500 just crossed 3,000 points, the Dow Jones is above 25,000 points and at the same time, safe havens WERE DROPPED on the side of the road.

The Federal Reserve is PUSHING AHEAD with aggressive ETF purchases and DEBT MONETIZATION on behalf of the Federal Government. June is going to be one of the most CENTRALLY-ASSISTED months in U.S. history. The deficit is getting out of hand and the S&P 500 is kissing 3,000 again.