I’ll tell you exactly when…

Even though President Trump was always blamed for putting pressure on the FED, he did so publicly, on Twitter and in press conferences, which made it easy for markets to address and assess.

He told the FED to drop rates to zero, something they were against, yet rates have been zero for two years now…

When did markets peak, though? They peaked, when President Biden decided that if Jerome Powell wants to keep his job, he needs to make inflation public enemy No.1, even though the FED is constantly saying inflation is caused by the government’s policy on the healthcare crisis, which is creating shortages in labor and in supplying the incredible demand out there.

So, if you’re wondering why the markets keep dropping and dropping, it’s because the market assumes Biden isn’t letting-up and through backdoor channels, it’s trying to direct the FED to raise rates in March by 50bps, something it hasn’t done in 20 years! 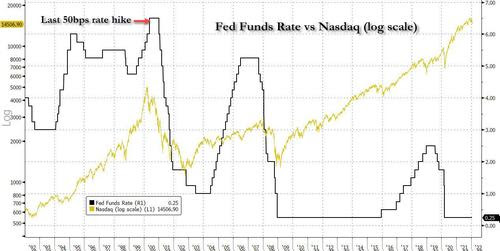 Courtesy: Zerohedge.com
There’s no relief until March 15th, when we know what the FED does, UNLESS the markets realize that politics can only go so far… there are already many bargains out there, so I am buying heavily!