The Market Sees
The End of Supply Chain Shortages

The markets are roaring, gold is back above $1,800/ounce and the party appears to be getting started again!

This reminds me of the time that I attended one of those amazing music festivals a couple of years ago (before the world changed) and, in the middle of the DJ’s set, his equipment died. Literally, a power shortage killed the electricity and we were all left standing there.

Immediately, technicians rushed in and began to sort the problem out, but it was difficult to stay in the vibe for long, for us in the crowd. People began to look for things to do, scroll their phones, capitalize on the situation and go to the toilets or the bar or, worst of all, just leave.

Others took a break by sitting down right where they were; the longer the problem lingered, the more annoyed the audience got, but the DJ was trying to keep everyone entertained in the meantime, so hope remained that this would only be a 5-10-minute delay.

Luckily, out of nowhere, entertainment arrived in the form of an active bar, passing around drinks and props, cheering everyone and reassuring this is temporary. Two minutes later, the sound came back on and we all got fired up so quickly, because the production team overdelivered, while the cords were being rerouted and fixed.

The DJ was so thrilled that he immediately announced that he was not leaving until everyone was happy and satisfied.

Obviously, this got the audience fired up even more.

At that point, people understood that this show would go on and that they’d bend over backwards to please the crowd and we appreciated that!

Yesterday, when the announcement came in that the FDA approved the vaccine, markets saw this and instantly realized the gravity of it.

Essentially, yesterday made this disease the same as any other in terms of regulations, and the market sees right through this.

Supply chains are going to start returning to normal, people will go back to work and government aid will soften; it’s the end of endless stimulus checks and, with that, the market anticipates the FED to taper, since it’s another sign of getting back in shape. 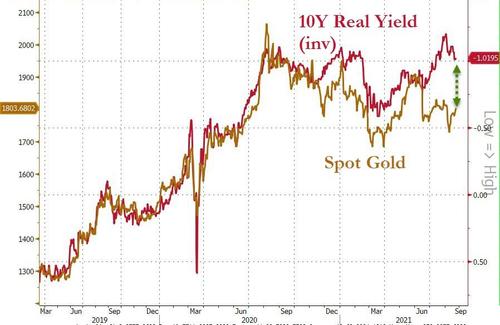 As you can see, gold can easily rally further, now that the market is beginning to price the possibility of a rate hike.

In terms of historical precedence, there have been six rate hike periods in the past fifty years, and each of these resulted in a rally in the price of gold!

Secondly, the risk-on mentality is back, meaning the demand for cash will diminish and this is great for silver!

You can see from yesterday’s response that the 10-yr bond did not spike, so the market does not anticipate the party will again lead to inflation — we’re getting normalcy, without the fear of inflation and that’s what gold needs.

This is a big moment for everyone!

In terms of stimulus, this was likely the end of it, so the markets will begin to factor that in as well.

I’ll have more on Thursday, as I see what Wall Street is doing, but the re-opening is certainly in turbo mode.

We are not securities dealers or brokers, investment advisers or financial advisers, and you should not rely on the information herein as investment advice. We are a marketing company and are paid advertisers. If you are seeking personal investment advice, please contact a qualified and registered broker, investment adviser or financial adviser. You should not make any investment decisions based on our communications. Examples that we provide of share price increases pertaining to a particular Issuer from one referenced date to another represent an arbitrarily chosen time period and are no indication whatsoever of future stock prices for that Issuer and are of no predictive value. Our stock profiles are intended to highlight certain companies for your further investigation; they are not stock recommendations or constitute an offer or sale of the referenced securities. The securities issued by the companies we profile should be considered high risk; if you do invest despite these warnings, you may lose your entire investment. Please do your own research before investing, including reading the companies’ SEDAR and SEC filings, press releases, and risk disclosures. It is our policy that information contained in this profile was provided by the company, extracted from SEDAR and SEC filings, company websites, and other publicly available sources. We believe the sources and information are accurate and reliable but we cannot guarantee it.Please read our full disclaimer at PortfolioWealthGlobal.com/disclaimer​