Yesterday, for the first time since the BACK-AND-FORTH between bulls and bears began, we saw real ANIMAL SPIRITS, not just stocks rising on no volume and computers doing the heavy lifting, as we’ve seen for weeks; the BULLS WANTED IN this time.

Fortunately, we issued our WATCH LIST, so the opportunities were RIGHT THERE for the taking, had one waited and JUMPED ON THEM when the time was right.

This is what we said on American Express: “Right now, one of America’s strongest brands is SUFFERING. The price of the company’s shares has plummeted from $136 to $68, which is more than a 50% decline. Following the Great Financial Crisis of 2008, this stock has returned over 1,000%, NOT INCLUDING dividends, so AXP is definitely cyclical, being that it is leveraged to the consumer and shopping. We might not see $68 again unless this REOPENING goes extremely badly, but at between $76 and $78, I’m personally a buyer.”

Just a couple trading sessions ago, my limit order FILLED. The position is already up more than 12%, since Thursday.

Next, we said this on UGI Corporation: “This is a utility company that owns SOME SERIOUSLY stable and long-term natural gas and electric power distribution contracts. It’s been around since 1882 and its stock price has been STALE, LIKE A ROCK, until COVID-19 came along. In fact, it has been quietly making shareholders richer for decades. The price has fallen by 50% because of what’s happening, which makes their 4.72% dividend yield a viable alternative for passive income. This company, unlike many boring utility providers, also has a hungry CEO that is looking for growth opportunities. My limit order is set for $26.”

There are a number of additional WINNING POSITIONS, the largest of which is Leggett & Platt, which is up more than 22% in just a few days, when the order filled.

Inside the report, there is currently one company that is within its buy range: Travelers (an insurance giant). The whole insurance industry is COMING UNDER FIRE by zero interest rates, but they will prevail. 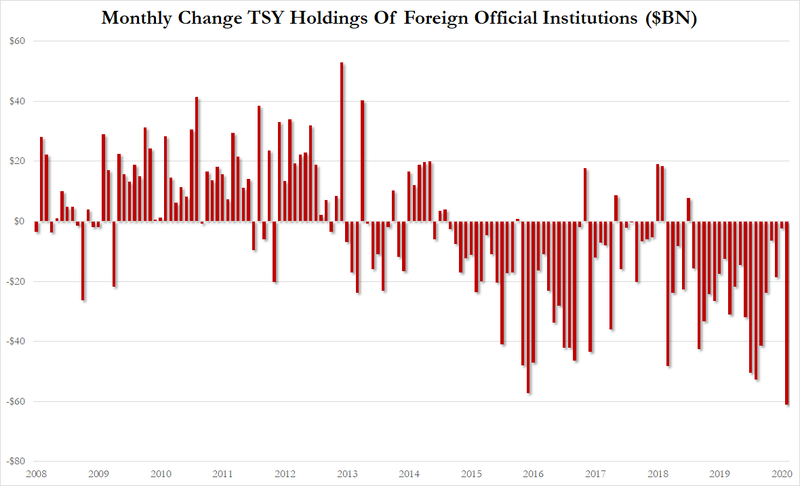 As you can see, by 2014, FOREIGN GOVERNMENTS had had just about enough of Treasury bonds. The trend changed from mostly buying to mostly DUMPING.

I’m not calling for a dollar BEAR MARKET against fiat currencies, but clearly it is Armageddon, when viewed through the lens of ounces of gold. The conditions that create cyclical dollar bears are NOT HERE YET, but they’re getting close. For example, from the standpoint of interest rates spread, the dollar yields close to what other major currencies are yielding. The gap is narrowing.

What’s MISSING is to see emerging markets, China, Europe or Japan, growing faster than America, but we’re not there at all. The dollar will continue to bid.

That’s the thing, though – while dollars are still LOVED, gold is making its move!

This is how strong the surge has been; my take on this is that precious metals will continue TRENDING UPWARDS, along with the dollar, if need be.

The reason is that gold is now becoming MUST-OWN for more institutions, with gold stocks performing at their PEAK CAPACITY.

What a great time to be investing.

Disclosure/Disclaimer:
We are not brokers, investment or financial advisers, and you should not rely on the information herein as investment advice. If you are seeking personal investment advice, please contact a qualified and registered broker, investment adviser or financial adviser. You should not make any investment decisions based on our communications. Wallace Hill LTD, owned by the same parties as Portfolio Wealth Global LLC has been compensated by Gold Mining Inc for this email coverage. We have entered into a one year digital marketing agreement and have received one hundred thousand Canadian dollars and stock options that vest over twelve months. We also own shares of the company and will never sell shares within four weeks of any email coverage. Our stock profiles are intended to highlight certain companies for YOUR further investigation; they are NOT recommendations. The securities issued by the companies we profile should be considered high risk and, if you do invest, you may lose your entire investment. Please do your own research before investing, including reading the companies’ SEC filings, press releases, and risk disclosures. Information contained in this profile was provided by the company, extracted from SEC filings, company websites, and other publicly available sources. We believe the sources and information are accurate and reliable but we cannot guarantee it.

You’re watching a full-blown, uninterrupted hysteria and you’re definitely seeing the demise of the Blue Sweep in politics; this will be pinned on the FED and on Washington and it won’t take long for this to turn into a major crisis, unless there’s intervention.

END_OF_DOCUMENT_TOKEN_TO_BE_REPLACED

This past week was so bad that political sites now forecast that Donald Trump is more popular than Biden!