Warren Buffett hasn’t been able to beat the indices for seven straight years. That has NEVER happened before in his whole career. It’s a great indicator of how the past 10 years have been remarkably different than those before them for investors. More than ever before, CEOs have been using earnings and loans to buy back shares and reduce share counts. This helps to boost EPS (Earnings per Share), which directly impact their own compensation, as well as raise the price of the stock.

Many have been adamant that this is “rigging” or manipulation, but it’s most certainly not. CEOs are charged by the board of directors to make capital allocation decisions and they’ve used the low-rates environment to implement this strategy. Some have done so in a foolish way, though; when CEOs buy back shares with the use of excessive leverage to do it – while their company is losing ground to competitors and should be spending money on improving their business – then it is stupid behavior that will result in mass failure to buy back shares, which don’t help the business to retain dominance.

Keeping rates this low, though, makes it such that borrowing doesn’t take such a great toll on corporations. Many mediocre ones are then able to stay in business, even though they might not be, had the barrier of entry (interest rates) been normalized to historical precedence.

Negative rates and ZIRP (Zero Interest Rates Policy) has changed the world. It almost makes one wonder why we need interest rates at all. Can credit just be created without cost by governments? Are lenders taking no risk by purchasing bonds?

Somehow, investors play along with this scam. Then there’s this entity called a central bank, which in most countries is owned by the government. The central bank in the U.S. is overseen by congress, though it has been documented that it is not a federal entity in itself.

Regardless of who its stockholders are, it has lawful ability to increase its balance sheet on a whim. The level of stupidity and absurdness of this mechanism is beyond me. It’s not even a bank in the traditional sense. It can NEVER go bankrupt by making bad loans, since it can default on them and create new currency units to replace them. It’s financial fantasy.

But even after knowing all of this, the system still functions somehow.

Here’s how the system runs, over time: 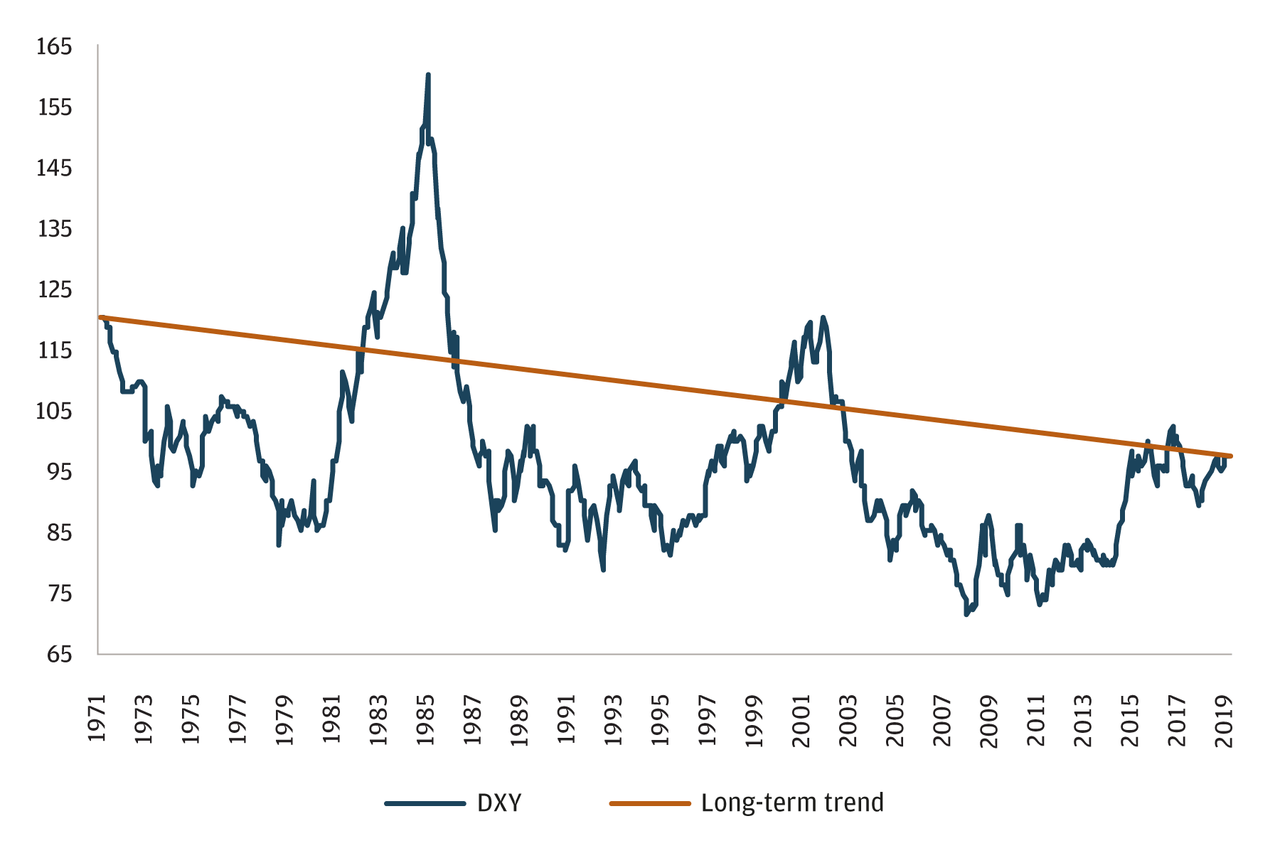 Even without being backed by gold, the dollar doesn’t drop like a hammer over long periods. It gradually loses value to the tune of 0.5%-2% a year, depending on what part of the cycle you catch it in.

As you can see, it is currently ending a bull market, topping off before rolling over to bear territory.

Of course, the DXY measures the dollar’s strength compared to other national notes and fiat currencies – paper money. It doesn’t tell the whole picture, nor does it compare it with hard money like precious metals.

The S&P 500 was trading for 93 points in 1971. It is worth 32-times that today. Gold has actually outperformed the price appreciation of the S&P 500 since the Nixon Shock!

Of course, that’s without adding dividends, which are an additional 40% for the profits.

There’s no doubt about it: cash has been horrible, the worst asset class over time.

Long-term investing is the surest way to grow your wealth. There have been many bear markets, recessions, and catastrophes, but investing WORKS, despite it all.

In certain times, though, it is worthwhile to change focus from long-term to short-term and capitalize on trends.

There’s enormous money to be made here, especially since it is so HATED, even by many silver bugs who keep reminding us how horribly it has been treating them for almost a decade.

The FED is making silver shine, and on July 30th it will put it in a great spot to explode.