Over the years, many have speculated as to the case of Building 7, the 47-story skyscraper that only sustained debris falling from the north and south towers collapsing, then caught fire and was eventually destroyed when internal columns failed, according to the official theory.

David Silverstein, the well-known and much-loved developer whose company owned the towers and had insurance policies on the complex, was heard saying in an interview that they decided to “pull it,” which sparked a huge controversy over the whole matter.

To make things worse, the building’s destruction looks like a textbook controlled demolition, and Silverstein’s $4.5 billion insurance claim was further fuel on the fire of speculation about what he knew and what the government knew ahead of time.

We’ll probably never know the truth about the entire matter, but I do want to stress something unique that has always been intriguing to me about this whole thing.

Millions, if not tens (maybe even hundreds) of millions of people have watched the planes go into the towers. Many more have seen the footage of the ball of fire hitting the Pentagon (the world’s most security-recorded building, with over 300,000 cameras), but there’s not one shot of the plane that went into it, and some have seen the curious case of Building 7, which falls in the afternoon for seemingly no reason.

To this day, more people are convinced that the official story is false, and there have been tens of thousands of engineers and scientists that have questioned it.

Think about the big picture: it’s the world’s most broadcasted disaster with billions impacted, yet no one can agree on what really happened that day.

If humans can’t make up their minds on that, how can we ever hope to really understand the global economy, which is extremely dynamic and moving and changing by the second?

We can’t and we won’t, which is why so few beat the averages and even fewer are consistently making money in the markets. 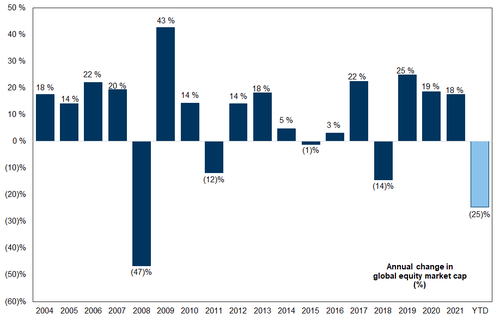 What we know for a fact is that nearly the past two years’ worth of appreciation has been wiped. After a 19% gain and an additional 18% gain on that, global equity has fallen 25% this year.

What tells the story better is the loss compared with GDP, which has been horrific this year but not abnormal in the context of other crashes: 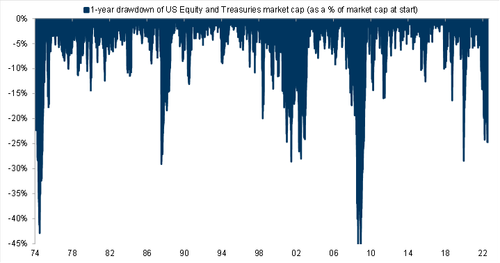 The way I see it, we had a bubble in government debt (which yields NEGATIVE rates), an overvalued growth sector (unprofitable companies commanding huge market caps), and bubbles in altcoins, SPACs, and other exotic assets, but nothing was STRUCTURALLY hysterical until the world shut down due to COVID-19.

Closing down and opening back up gave rise to excessive behavior and a sense that, as Janet Yellen put it, the world would never see a major crisis again.

Everything was working for everyone, and the FED doesn’t really know how to solve such matters apart from raising rates rapidly, which is a sign for households, corporations, and governments that they’ve overspent and must be tamed. 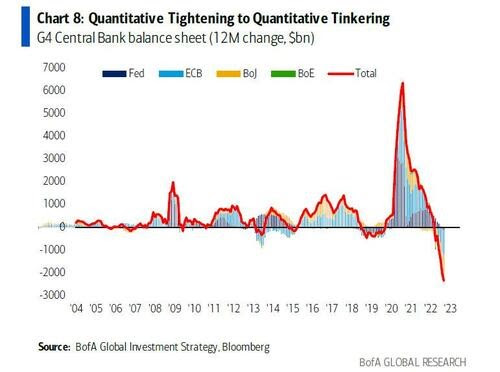 Basically, what the FED needs to understand is that we believe that most people get it. The changes in behavior have started, and it’s certainly true that the inflationary trend we were on is slowing, but the FED’s actions will continue to impact the economy into 2023, which is setting up to be the best year for GOLD and SILVER in my entire career!