I’ve spent the past few hours online, listening to some of the biggest YT bloggers talking about the state of the U.S. economy.

The great thing about YouTube is that it allows anyone, no matter his or her experience and background, to have a voice and an opinion. More often that not, though, channels get viewed more just because they share radical views, mixed with factual data, creating interest, under false pretense.

It is highly inaccurate, however sincere and well-aiming the blogger is, as you can readily see, to act on some of these predictions made so freely online. It is best to simply go back to previous interviews with these “experts” and compare their predictions with reality.

It is very easy to “fall in love” with someone, since he pushes your personal hot buttons, and blindly follow him to a ditch. Often, it is the blind leading the blind.

It’s time to call BULLSHIT on amateur market commentators, who spread partial truths, not viciously, but out of ignorance.

Today, I want to show you facts, which might be in the opposite direction of what you’ve heard about the economy on these alternative media outlets or, for that matter, on mainstream ones.

There’s one thing to keep in mind regarding the U.S. economy in 2018, and that is that the RECOVERY did not lift up everyone out of misery in equal fashion.

For the most part, between 2009 and 2015, it helped the rich get much richer, while the middle-class and lower-income brackets stayed put or sunk deeper into debt and challenges.

Starting from the election, though, we’ve seen a change in many key economic indicators. 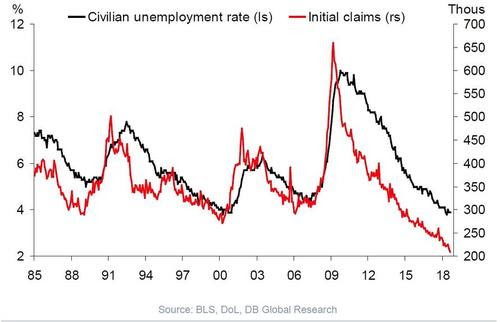 We’re nearly hitting full employment, which means that every person, who is skilled enough in his profession, is able to find a full-time job right now. Sure, many have struggling with finding gainful employment, and they should be concerned, since America has changed and their skills are not valued anymore.

For those, who have the specialized skill sets this new economy demands, life is getting better, but stocks do not like these types of tight employment conditions, since it means inflation is coming and, obviously, at some point, layoffs. 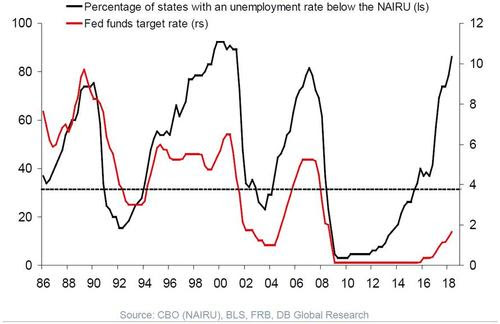 Look at the perfect correlation, over time, between the unemployment rate and the Fed Funds Rate.

Portfolio Wealth Global is going to be the first newsletter in the world to forecast that interest rates are about to peak for this cycle very soon.

Many, in fact, tens of millions of investors, believe higher interest rates will continue for years on end, but they will hit the ceiling much sooner than they think.

This is the reason Portfolio Wealth Global is certain inflation will persist and become a big issue.

Millennials and a Specialized Economy 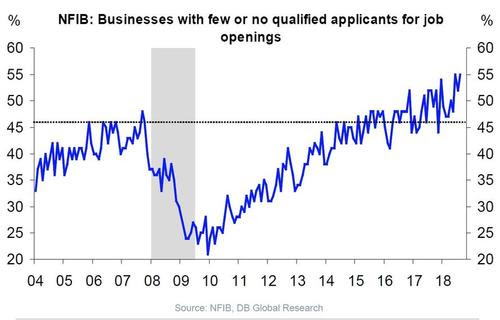 In modern-day America, there is a problem, which is impacting millions of people. Insufficient training in public schools and unattainable college tuitions for the masses are hampering growth.

The poor cannot afford to train for high-paying jobs. It’s a vicious cycle.

The demand for employees is bigger than in 2008, but corporations can’t find enough skilled labor.

This shouldn’t be happening in a free-market society!

Government intervention has made education too expensive.

Lack of proper financial education is the main reason I launched this newsletter. In the coming years, I plan to create a program to help young children, who are not given a choice in life, but to live an existence, full of bad influence from parents, who are poor role models.

This will be a major way I intend to give back to society and do my part to bring equality to this divided nation.

We live in an economy, which punishes general knowledge and rewards specialized expertise.

Don’t spend time superficially learning many things. Instead, devote hundreds of hours to knowing everything about a niche subject, which is valuable to employers.