After CEOs from the world’s biggest companies unanimously announced that costs were going up for new gold projects, the market didn’t budge.

Even after the officially suppressed and ridiculously foolish CPI data, which measures inflation, without accounting for the price of foods and energy, printed at 2.9%, gold and silver didn’t rally.

Then, the U.S. GDP growth stats were published, showing a 4.1% increase, which is rock-solid, but we saw no increased demand for the yellow and white metal from investors, as a result. The fear that low unemployment numbers, which are truly remarkable right now, and the ballooning deficits, would cause an immediate recession, hasn’t been a major concern up until now.

In other words, investors are now: (1) preferring stocks to bonds, due to the fact that bonds yields are still too low to compete with S&P 500 returns, (2) prefer cash to gold, since there are no holding costs and far less volatility, and (3) prefer to believe that existing problems {A} trade wars, {B} a mismanaged rate hike cycle, and {C} all-time high credit card obligations, will resolve themselves, without rattling the cage.

I don’t fight with consensus because that is not my role, as an investor.

In fact, the more warped the consensus is, the better the opportunities a market presents.

Most of the time, the consensus is, pretty much, correct. This is what some academics refer to as the Efficient Market Theory, which claims that buyers and sellers are always balanced, so no investor can, over the long-term, achieve superior results over the index or the average.

This is, of course, all wrong, not only because of the amount of 60-yr old, billionaire fund managers, who continually crush the index for decades, but also because emotional decisions, rather than logical ones, dictate an overwhelming amount of the choices being made, especially during the late stages of bull markets and bear markets.

This is why I want to see gold and silver stay down for a while longer. I want buyers to lose all sense of bullishness, almost succumbing to a perma-bearish outlook, forgetting about their knowledge that all markets are cyclical, especially commodities, and I want them to detach from reality and decide that gold will NEVER come back.

Then, we need to see how sellers react. Once they’ve all liquidated in disgust, the bottom will be in.

Commodities bull markets are short-lived, because they originate, as a by-product of a lack of alternatives.

This is a crucial point to keep in mind.

Commodity businesses, overall, are inferior to modern-day ones. First of all, the risk is huge. Not only are they selling a product, which is no different than that of their competition, giving them no control over its price, they are also at risk of coming up short of discovering economic deposits, timing their growth wrong by borrowing money during the worst period or loading up on debt right before a reversal, and, of course, the granddaddy of them all, mismanaging the budgets in the bear years.

We want to make sure the last of the sellers have thrown in the towel.

Seriously, there is no reason to jump the gun because mining shares are so cheap that even if they rally 30%-40% in no-time, proving they are starting an uptrend, the potential strength of their growth is in the triple-digit region, not the double-digit one.

We just can’t get this sector any cheaper than it is today.

Instead of attempting to time it, notice that once a bottom is set, investors have, at a minimum, two to three years of upside ahead of them, and if we get another decade like the first one of this century, then an 11-year bull run could be upon us.

My message is clear, though, we are in NO RUSH.

On the flip side, the more this goes on, the better it is.

Remember, when owning the physical metals, the purpose isn’t to buy low and sell high. Instead, it is to have enough physical gold and silver to survive a reset environment, if one occurs.

For each of us, the amount we choose to allocate to “Catastrophe Insurance” is different, but two good rules to live by are: (1) around 5%-7% of personal net worth, and (2) over 1-yr of fiat currency spending power, using your current lifestyle obligations.

When positioning with commodities to make big, triple-digit gains, we stick with the stocks.

Ideally, you’d have 80% invested in royalty companies, which are far better businesses, if you’re able to buy them at proper valuations and 20% in an ultra-risky development-stage, exploration-stage, or operational mining stage small-cap deals, with legendary management teams.

The silly money, which no other sector can provide to investors, is with these micro-cap companies, whose market cap is $20M-$200M, because any catalyst, even as small as gold prices jumping 10%-15%, could triple the value of your position. 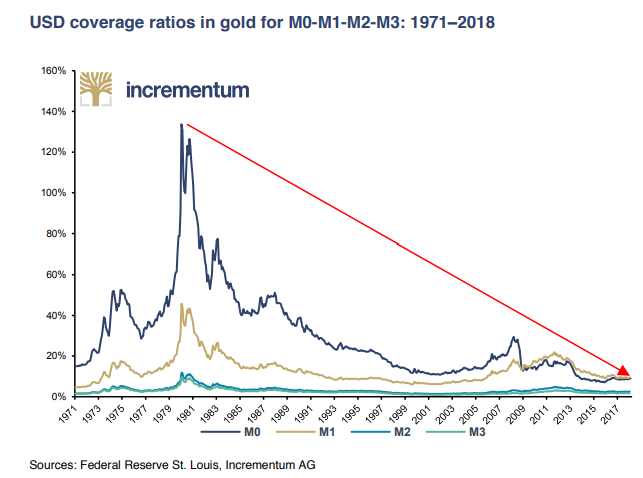 This is as low as our currencies have been covered by precious metals since 1971 and 2000.

Both marked the end of significant bear markets for precious metals, so I’m incredibly bullish; there is no reason to pile in big before we see the last of the sellers leaving the building.

In the meantime, I’m focusing on companies, such as the ones I covered in our previous letter.

Patience will reward us.

Playing basketball as a kid, from the age of six up to the age of eighteen, I had MY FAIR SHARE of last-second thrillers, buzzer-beaters and game-winning shots.

There’s nothing like a close race to get the JUICES FLOWING. Fake polls or not, Trump knows that he is losing public support and that he might be close to losing the upcoming election. Before the virus, it was NEXT TO GUARANTEED that he’d win and stay for a second term.

By now, it ought to be clear that western governments aren’t ISSUING DEBT with the intention of paying it back. They’re stalling, buying time, waiting it out and anticipating the Chinese to disrupt the currency structure on the global scene, putting themselves and the citizens they serve on a collision course with a MONSTER TRUCK, metaphorically speaking.

There’s a clear agenda IN PLACE. The Democrat-led states are taking A HARD LINE against Covid-19, while the Republican ones are adamant about re-opening.