Many people believe that Trump is constantly moving the goal post, toying with the Chinese, stretching the negotiations out, enjoying the back and forth of it – but he’s not.

In his mind, China is what the USSR was to America after the 2nd world war: a rising power, looking to outdo America and he sees no reason why he can’t succeed in beating the Chinese, just as Ronald Reagan’s administration demolished Communist Russia.

He does not see the USA as a declining power. He refuses to believe that and thought does create destiny. Where does it say that America’s best days are behind it? It says that only in the hearts of people that sold themselves this story.

So, the fundamental story here, that of America’s greatness and wanting to not only prolong it, but to strengthen it, is a healthy one. The only question is whether or not instituting tariffs is the right tactic.

As of Sunday, both the U.S. and China have taxed more imported goods to their respective countries and this has caused the dollar to climb even more.

In one regard, Trump is already getting what he wanted; the interest that Washington is paying on its bonds is now the LOWEST in its history.

When you lend money to the federal government for 30 years, you sign a death warrant. Not only are your returns nominal instead of inflation adjusted, but you also are forfeiting your money to the same institution that can LEGISLATE the very laws that govern money.

In other words, if they decide to write off part of the debt to devalue the dollar, suing various ways or to skim the bondholders, you’re shit out of luck.

I will never EVER lend money to governments, but will to S&P 500 companies, which have hundreds of billions in investible cash and pension funds, which in turn are looking for places to park trillions.

It’s unfortunate that they agree to receive these pathetic returns, but our times will be remembered in 100-200 years as the age of YIELD STUPIDITY.

Donald’s latest round of tariffs is unique, though, since it caused retaliation by the Chinese, who don’t want to be bullied and have now taxed consumer goods. In a number of months, we will see inflation – there’s no doubt about it.

Today we’re seeing silver at about $18.50/ounce, due to this assumption that inflation will be a bigger issue, but we’re also seeing the dollar BREAKING all kinds of records of strength as well.

This rare simultaneous rally of both precious metals and the U.S. dollar can only last so long. One of two scenarios can happen: either the dollar goes higher by an additional 5%, which will really disrupt many industries, or we’ll need to see the FED making an historic rate cut of 50bps in September.

Either way, companies are feeling the backlash from the trade war: 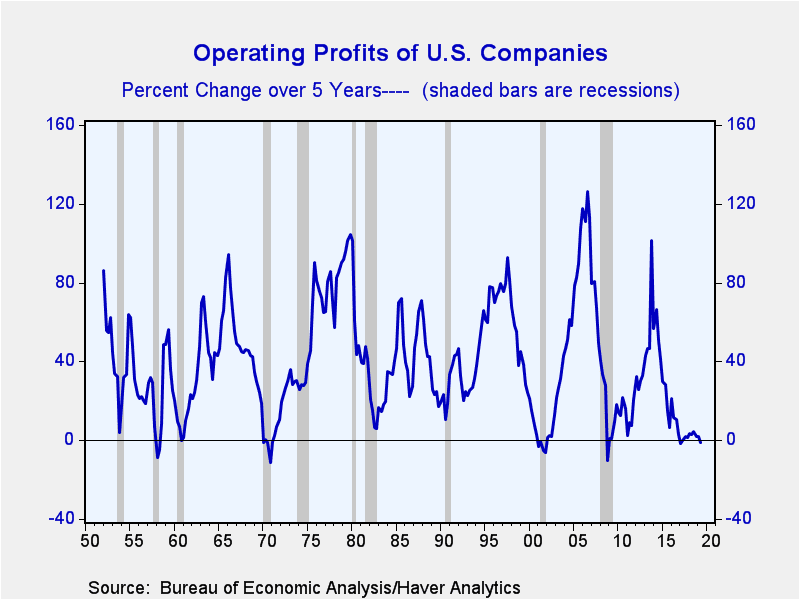 In the end, profits drive valuations. This chart leaves no room to the imagination. The real economy is damn near a recession and we’ll start seeing the rotten fruits very soon.

Recessions are not a problem; every economy suffers from them. The issue is the preparedness level of the population.

Portfolio Wealth Global’s analysis is that a RECESSION will actually raise the approval rating of Trump, who knows exactly who to blame for it.

If we start seeing a market correction, I expect the China trade deal to be Trump’s top priority. I also expect it to be the dollar’s peak.

We are getting very close to seeing silver reaching $20/ounce. It’s going to be beautiful.