CHOKING ON IT: Stocks WHACKED – Do Or Die MOMENT!

Just a few days ago, we published our analysis of the current EUPHORIA in the markets and asked that you take a moment to consider how CRAZY the sentiment is in the bull camp and how IMMINENT a correction would be.

We were really concerned by how much of a stretch it was to assume that stocks could just charge ahead, when it was clear as day that we do not have much to go on, in fundamental terms.

Here’s how bad it got, at one point:

As you can see from the chart above, markets are ADDICTED, at this point, to the Federal Reserve’s policy of propping up prices every time they seem to be waning.

One important reason is that stock prices are almost the lifeblood of the retirement hoax, which boomers have been promised to take part in.

If boomers see stocks go down hard, so goes their plan to ever take their foot off the pedal.

This is paramount to the reasoning and rationale of the central bank; their dual mandate is to keep prices stable and unemployment low, but it is DEBATABLE whether they’ve ever been able to do any of that and market forces are the primary reason for this.

What is visible is that the FED intensifies booms and busts, by mismanaging interest rates and balance sheet contractions and expansions.

In my world, the FED is not an institution that brings value to the economy.

In 1913, which is one hundred and seven years ago, perhaps a central bank was somehow looked at as a source of stability, but in a global marketplace as diverse and vibrant as ours, I don’t believe in its worth at all.

The added value that central banks bring to the table is presumptuous, since it assumes that somehow, their analytical capabilities and data are superior to the market’s intelligence.

That cannot be true; therefore, if we’re going to get rid of them, my stance is that this should be the main reason for it. 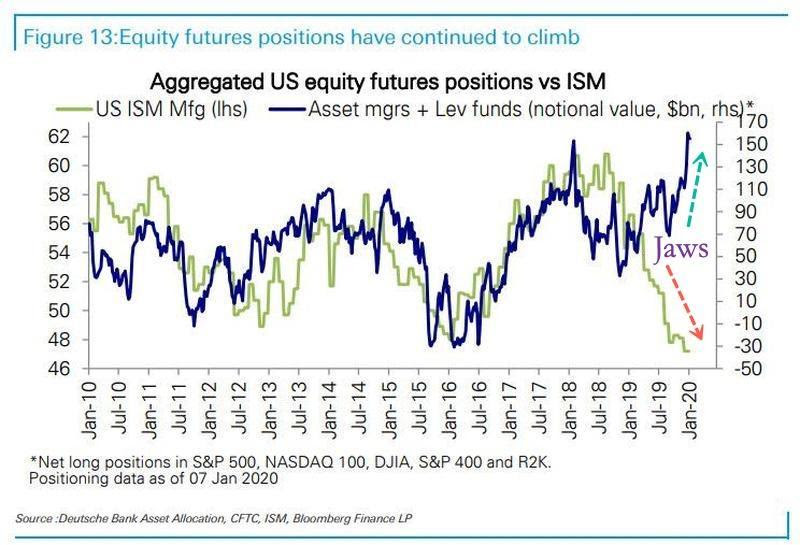 Notice that never before have the two lines DIVERGED so clearly.

That undoubtedly has to do with the FED U-Turn, since it allows companies to stay afloat while racking up debts, due to artificially-low interest rates.

That’s dangerous and is PROMOTED by the central banks, indirectly, but certainly KNOWINGLY, since we’ve seen their alarmed comments on these matters going all the way back to 2012 and 2014.

Central banks are MANIPULATING natural supply and demand toggle wars, and had anyone else who is not part of the government done the same thing, they would have been shut down.

The 2nd thing that is clear from the chart above is that recessions happen when these two are on the rise, as they are now.

On one hand, you have President Trump declaring the biggest economic boom in history and that we’re just getting started. On the other, you have many contradicting data reference points.

You will have to decide what to do; it’s a JUNGLE out there.