President Trump heard chants of “USA, USA, USA” in his State of the Union address. Sensing a moment of comic relief, Trump responded how good it sounded to hear it. It was a rare sight and one that was seriously unique.

The speech was filled with recognition of America’s proudest moments, such as applauding veterans of D-day.  The invasion of Normandy on June 6th, 1944 is considered by many to be the most decisive day of the 20th century. To us, it looks like the agenda of the day was to unify the nation behind Trump’s vision of a strong America.

The message of “America First” set the tone for the first 25 minutes. Trump proceeded to ask Congress to compromise, cooperate, and to be guided by the common good, as opposed to gridlock and politics. He asked Congress to choose greatness over bi-partisan conflicts. In terms of public speaking skills, Trump is a master and in a class of his own.

Next, he cited a long list of positive things Americans should feel blessed about, but what struck me the most is that no word was uttered concerning the debt challenges that America faces. There was nothing about the need to tighten the belt, to get off the debt train, or about our growing dependency on a central bank—an idea that the founding fathers were convinced was terrible for the country. 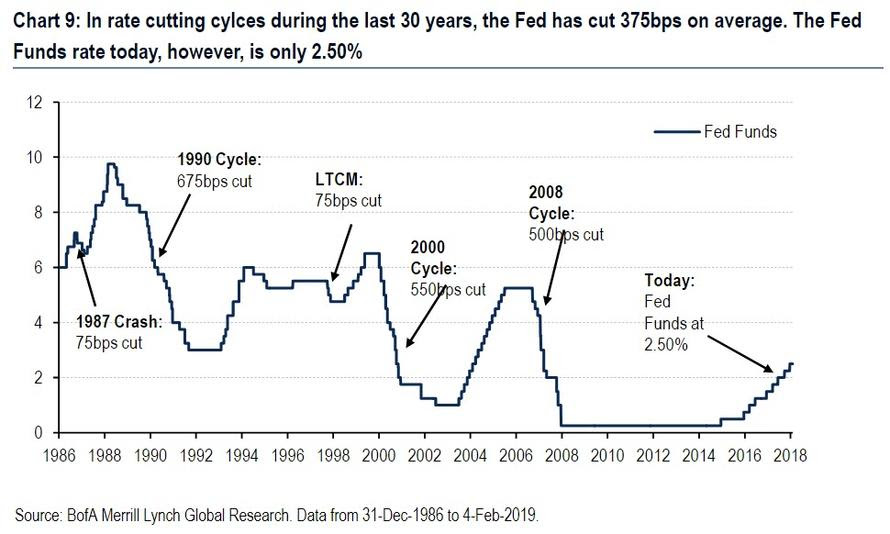 Carefully study this chart produced by Bank of America. Notice that when the FED “pauses” hikes, it never resumes tightening. There has NEVER been a pause to hikes followed by another hike. If the FED decides to implement additional hikes this time, it would be the 1st time in its history.

At present, there’s a clear contradiction between what the over-heated economy needs, in terms of interest rates policy, compared with what stock market investors want. Clearly, investors have fallen in love with the Powell-Put, which sets an imaginary floor for share prices. This gives confidence to the bulls to keep buying as they have in January.

The U.S. economy employs 157M individuals, more than at any other time in history. Their wages are ticking-up by 3%, their taxes have been cut, but inflation is becoming an issue. The FED would love to raise rates in order to stave off these price pressures, but it risks taking the markets down for 140M Americans. This includes those who are LONG on the S&P 500, whether through their 401-Ks, retirement accounts, or general portfolios. Even if the central bank does decide to cut, what sort of wiggle-room does it have to work with?

As the chart above shows, the average cutting cycle has been 3.75%, which, if implemented, will now take us into deep negative territory. Not only that, but even with the FED’s tight maneuvering outlook—with only 2.25% to play with—it is more than can be said about the European Central Bank or the Bank of Japan, which don’t even have that luxury.

What really stands out from this chart is that December 2016 was the last time investors bought the dip with all their might.

Today, more and more are becoming aware that the party is out of booze and the DJ is packing up his turntable. What’s most obvious is that we’re officially out of control and the FED has no clue what to do. Instead, it now follows the market’s wishes, changing its tune with the data. It has lost its independence and, consequently, Portfolio Wealth Global forecasts turmoil.

It’s possible that markets climb higher for the time being, as December’s sentiment was similar to 2009’s pessimism. So while there’s definitely reason to believe that stocks could rally further, this disconnect between what the U.S. economy needs and what the stock markets want remains a huge challenge.

As February commences, I want to show you how I personally plan to allocate funds and invest this year, so I’ll release my portfolio model this Sunday, at 11 AM CST. We’ve definitely crossed the line from recovery to full capacity, and from tightening to pausing. The ramifications are overwhelming.