Crunch Time: My Biggest Position Ever!

Yesterday, I called my father and implored him to look at the data on this company, ahead of today’s IPO.

Among his friends, he is known for only holding precious metals, since he is too afraid to risk his modest salary with any investment, but I sent him Anthony Lacavera’s resume, as well as hundreds of hours of footage from his interviews over the years.

We, then, walked through the fact that Globalive Tech (TSX-V: LIVE) has a huge Rolodex of potential Joint Ventures in the pipeline, as you can see from the company’s presentation.

Anthony’s sister, Catherine Lacavera, just announced she would also be joining the company. In the media, she is nicknamed, “Google’s secret weapon,” and was recently published in Fortune Magazine’s 40 under 40, alongside Mark Zuckerberg and Jack Dorsey.

She was also on the list of the “50 most influential people in the world of intellectual property.”

Then, we looked at the JV partners, as well as conducted a 3-way call with an Artificial Intelligence expert and a blockchain entrepreneur, which I know personally and have looked at Globalive Tech (TSX-V: LIVE) closely.

Like I said, my father managed to go about his life for 64 years without ever buying a single share, but this opportunity is so rock-solid, legitimate, and advantageous to early investors that it titled the odds and changed how he views risk.

We are going to walk through the company’s operation closely in the coming weeks and follow their story, as it unfolds – this is our No.1 tech play for this decade! 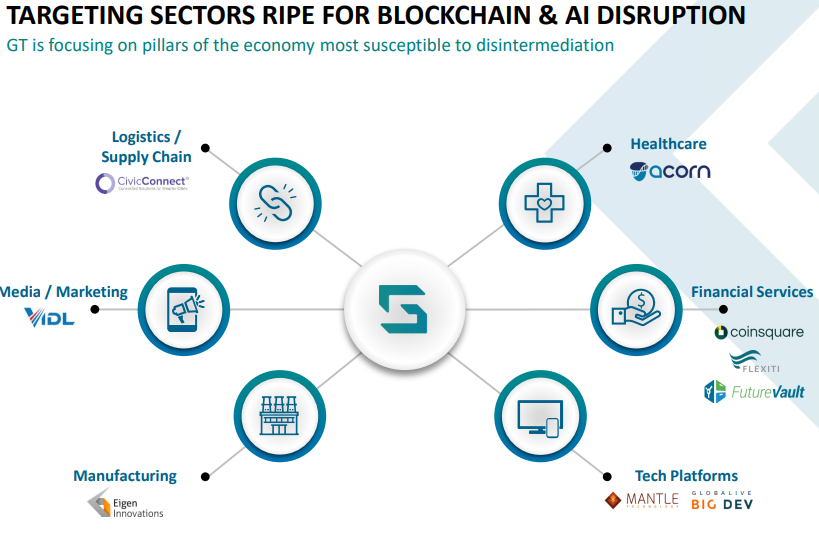 The company is strategically choosing the sectors, which are ripe for disruption with A.I. and blockchain.

Institutions are about to form a line around the block to finance the hyper-growth of this company, and we beat them to it.

This work is based on SEC filings, current events, interviews, corporate press releases and what we’ve learned as financial journalists. It may contain errors and you shouldn’t make any investment decision based solely on what you read here. It’s your money and your responsibility. The information herein is not intended to be personal legal or investment advice and may not be appropriate or applicable for all readers. If personal advice is needed, the services of a qualified legal, investment or tax professional should be sought. The ideas, projections and views expressed are those of PortfolioWealthGlobal.com and are not ideas, views or recommendations of Globalive or any of its officers or directors. Any forward looking statements are based on our assumptions, projections, beliefs and expectations, however, there is no guarantee that these statements will prove to be correct and are subject to risks and uncertainties. This work refers to joint ventures or investments that Globalive is a party to. Some of the joint ventures may be subject to further negotiation or documentation. Never base any decision off of our emails. PortfolioWealthGlobal.com stock profiles are intended to be stock ideas, NOT recommendations. The ideas we present are high risk and you can lose your entire investment, we are not stock pickers, market timers, investment advisers, and you should not base any investment decision off our website, emails, videos, or anything we publish. Please do your own research before investing. It is crucial that you at least look at current public filings and read the latest press releases. Information contained in this profile was extracted from current documents filed with the public, the company web site and other publicly available sources deemed reliable. Never base any investment decision from information contained in our website or emails or any or our publications. Our report is not intended to be, nor should it be construed as an offer to buy or sell, or a solicitation of an offer to buy or sell securities, or as a recommendation to purchase anything. This publication may provide the addresses or contain hyperlinks to websites; we disclaim any responsibility for the content of any such other websites. We have entered into a three year agreement directly with the company. We plan to purchase shares on the open market as a long-term holding, we have also been compensated eight hundred thousand dollars, eight hundred thousand options, and been given one million nine hundred thousand RSUs. Please use our site as a place to get ideas. Enjoy our videos and news analysis, but never make an investment decision off of anything we say.

It’s definitely a giant conspiracy, but it’s no longer a theory; after the indictment, it’s more of a criminal enterprise, disguised as a bank.

The health and standing of a company is more than anything else, driven by sales, “Show me the money,” as the saying goes. In this regard, one standout sports nutrition company is demonstrating that it is a sales juggernaut, to the point that a major retailer has just signed up for additional purchase orders.

With thousands of stakeholders and millions of dollars changing hands, digital intellectual property rights – and the blockchain’s role in protecting these rights – cannot be ignored.

Mainstream analysts and market bulls have some powerful numbers on their side: government-published unemployment figures remain low, America just had the best first quarter of a year for stocks since 1998, and the U.S. dollar is still the world’s reserve currency. But is all of this really indicative of a strong economy and a sustainable market, or is it just an illusion?