Short-term, the dollar is ready to make a breakout here against other fiat currencies. The dynamics of the global economy are such that the Federal Reserve was the only one tightening, while the rest were easing and getting into the negative rates range.

This caused a rush into the dollar and that demand, coupled with the fact that the FED was shrinking its balance sheet, caused the dollar to be the best-performing asset class in the world in 2018. It was a major anomaly.

In late December, when the FED announced that it was changing its tune, investors realized that the FED had probably made its last U-turn. From then on, there would be no more rate hikes, so starting in June, the price of precious metals began to accelerate higher.

In an election year, the central bank tends to remain neutral and to minimize its role, so to not be seen as influencing the economy too much.

The stock market is too heavily invested in the tech sector and America’s largest tech giants, Google and Facebook, have now become the target of monopoly inquiries. The U.S. government labeled Standard Oil (John D. Rockefeller’s company) a monopoly at the turn of the 20th century and forced it to split into pieces, one of them being today’s Exxon Mobile.

Google and Facebook might have to pay the same price, due to their abuse of privacy laws and data collection, in the same way Standard Oil did, due to its aggressive activities back in the day. This type of intervention will definitely scare investors and bring down valuations, so that’s one reason I see gold heading to $2,000/ounce.

The second reason is corporate debt. 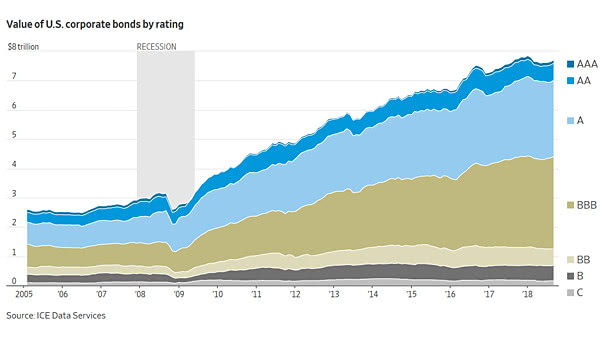 Not only is the U.S. corporate debt/GDP ratio at an all-time high of 47%, but the rating of the bonds themselves is mostly BBB (Triple B), which means that in the event of a slowdown, the banks will NOT be eager to refinance this junk.

If the baby boomers even smell a whiff of a crisis, they won’t be buying dips anymore and you can forget about corporate buybacks as well, since they’ll be preserving capital.

Look, without corporations buying U.S. equities, there wouldn’t even be a bull market. 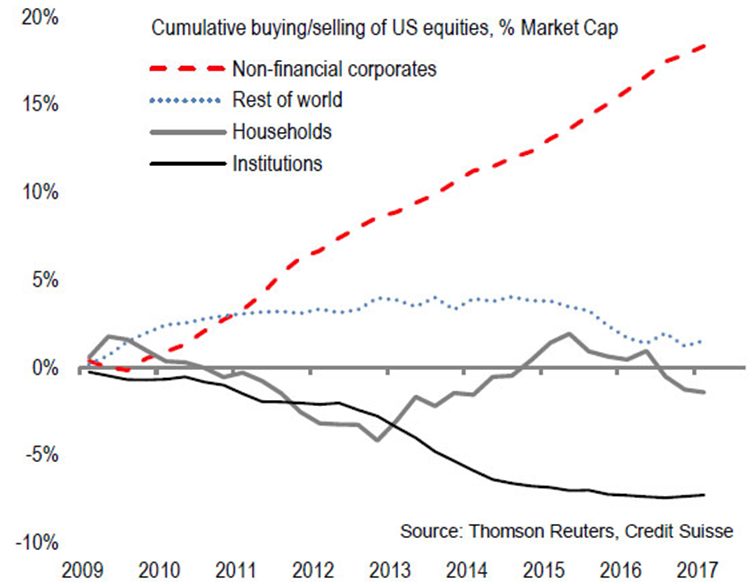 Pension funds are already underwater, so I can’t even imagine how many tax receipts and how much bailout money will be needed to help them meet obligations and demand of withdrawals. Central bank manipulation will allow for a peaceful exodus of all the money boomers have in the markets, but the price to pay in deficits and debt write-offs will be painful.

As you can see in the chart above, the rest of the world is buying U.S. equities, as I expect it will continue to do, but that’s not enough to offset the selling.

In the coming decade, central banks will become the friend of the masses – the general population, not the elites.

Monetary policy, as well as fiscal policy, will target YOU and your neighbors. Both the central bank and the government will be busy, making sure your pension is intact, your ability to borrow is alive and well, your ability to trust the stock market increases, and that the wealth gap doesn’t destroy the fabric of society.

In this new world, gold’s price will be worth more than $2,000/ounce, since all rates will go NEGATIVE.

In this world, no American will consider retiring in the traditional way that boomers were taught to save and invest.