Joe Biden Or Not,The Weight Is On Your Shoulders

Less than FOUR MONTHS from now, Americans will vote for a president, who will either be Joe Biden or the current resident of the White House, Donald Trump.For most people, the person who OCCUPIES THE HIGHEST OFFICE means very little to their personal net worth or income.Unless RADICAL IDEAS are implemented (which both candidates aren’t very big on, being mostly centered), and unless you happen to operate a business similar to that of The Carlyle Group (the private equity company whose expertise is in hiring ex-Capitol Hill big-wigs and solving problems that the government can’t, won’t or prefers to outsource), Trump or Biden aren’t YOUR MAIN CONCERN, when it comes right down to it.I’m not saying that the outcome doesn’t matter (believe me, it does), but my point is that it doesn’t SEAL YOUR FATE, financially speaking.Under either Trump or Biden, people IN EVERY INDUSTRY will become self-made millionaires. Regardless of who wins, the most unlikely success stories will emerge, so I want to put a mirror IN FRONT of you, so you get serious about becoming a millionaire. This is attainable – even if you’re not a businessman – in less than TWO DECADES.Globally, there are OVER 47 million dollar-denominated millionaires and that demographic grows by about 1.5 million people any given year.In the U.S. alone, there are about 18.5 million such individuals, which comes out to about 40% of global millionaires.I want to REPEAT THAT: 1 of 14 ADULTS living in the United States of America is A MILLIONAIRE.7 out of 10 millionaires live either in the U.S., China, Japan, Germany, France and the UK, so you can see that these are all countries with HIGHER TAXES, with neither of them serving as shelters or offshore. Taxes don’t determine your fate either. True, if Bernie Sanders or any other socialist were ever to be elected, taxes would BECOME A WEAPON and that would be unproductive.Globally speaking, 6 out of every 1,000 people belong to the millionaire’s club. You’re reading this message on a Sunday, so by the time you wake up tomorrow, an additional 1,689 millionaires will have been added!I am telling you this because I want to share with you how they ACT, so you can see how you measure, in comparison. They listed SAVING as their No.1 priority and I can READILY UNDERSTAND why. The reason is that the average millionaire achieves this milestone in 20-32 years, so IMAGINE the number of changes and MAJOR EVENTS that occur in that timespan. You must be ANTI-FRAGILE and the only way to really do it is to save constantly, in good times and bad.One important DATA point is that 8 of 10 millionaires are self-made, which means it is mostly about habits, not inheritance.The median age to become a millionaire is currently 50, and they’ve CLOCKED ROUGHLY 50 weekly hours along the journey.What they DON’T DO is spend much time watching MINDLESS ENTERTAINMENT; they can’t afford TO LOSE TIME. When they want to relax their minds, they engage in exercise or other activities that YIELD A MENTAL RETURN.Now, I want to ADD TWO of my own:

I am also going to shock you with the FOLLOWING STAT: Most millionaires have LOST EVERYTHING at least once!Financial devastation makes you humble and much more data-driven and wary, instead of hasty and prone to over-leveraging.​ 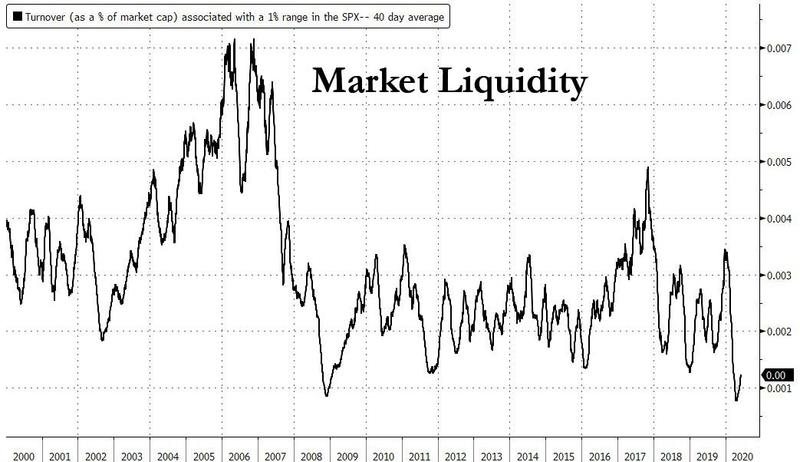 As you can see, market liquidity has hit a 20-YEAR LOW because of Covid-19. Similar to 2008, the markets are currently PARALYZED, which means what’s causing prices to go up are retail investors, who are buying the dip.As the upside is swift, then the downside will also be.Therefore, wait like a hawk for your moment, but BE EQUIPPED with our updated WATCH LIST, so you already know what to look for, IN ADVANCE!​