FORGET GOLD: This Is The Way!

We buy physical gold for various reasons, but the most obvious one is to protect our purchasing power. This is especially true in the face of currency printing, $1.1 trillion annual deficit spending, and the phenomenon termed “De-dollarization.” It represents the lack of appetite for U.S. government Treasuries – holding Washington’s debt and collecting artificially-low levels of interest payments in return.

It’s been one of the most tamed, mellow, and unconvincing bull markets that gold has had in its history.

Funds are shutting down their commodities desk, changing the name of precious metals products to “emerging markets” classifications and shying away from natural resources. It’s all because the Federal Reserve, in conjunction with Washington, have warped the inflation stats to reflect a 1.5%-1.9% CPI data statement for years now.

The inflation is there and it is manifested in the areas that matter most. Education has become so out of reach for most Americans that even Jerome Powell has admitted that the middle class and lower income brackets are deprived of their rights to be included in capitalism. The entire demographic group needs to either sacrifice hundreds of thousands of dollars in student debt to enter college or not even bother applying, since the burden is too great.

In healthcare, an industry that is relevant to the world’s wealthiest generation – the Baby Boomers – we’ve seen explosive inflation, one that has made this sector unaffordable and brought about government intervention to block further price hikes, but has achieved the exact opposite.

As with most things, once the federal government steps in to save the day, it ends up ruining the weekend.

Gold has outperformed the S&P 500 in the first 19 years of the millennium. It is not a thin victory, either. The buy-and-hold strategy for gold has worked far better than it has with stocks.

Historically, this is certainly an anomaly. Gold is a non-producing asset class. It needs to be compared to other forms of currency, like cash. It is not designed to compete with rental real estate, private lending, options trading, or dividend stocks and bonds. It can’t, since these investments generate a return, while gold does not.

The reason it has been able to achieve incredible results is because our SYSTEM is MESSED UP. It is so upside down that gold companies, specifically mining shares, have traded horribly for many years. Save for the epic eight-month rally in 2016, which crushed traditional markets, this sector has caused nothing but bloodshed, tears, and lousy real-world returns. 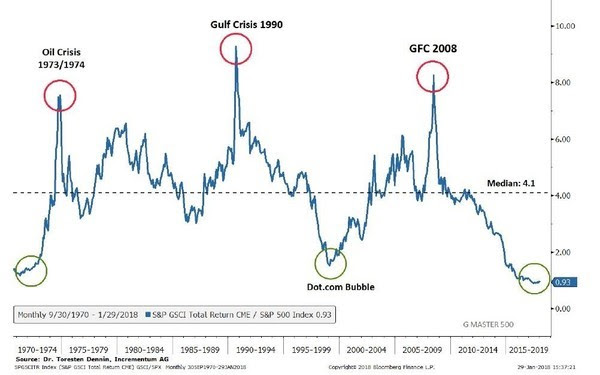 Because the price of gold has risen nominally, investors have assumed that physical gold is rallying; yet the mining shares are lagging, not keeping pace with the price increase for precious metals – but the truth is far more complex.

As you can see, though the price is rising nominally, it is clear as day that commodities are ending a 10-year bear market.  As a group, they’re the cheapest that they’ve been compared with the traditional economy, since Nixon criminally detached gold from the dollar. This created a world driven by debt and credit.

In the big picture, precious metals and all commodities have traded within a bear market for nearly a decade.

As the chart demonstrates, commodities are now even more undervalued than they were in the days of Nixon in 1971. The 2nd noticeable fact is that they’re forming an historic bottom.

I’ve found the ideal way to position right at the BOTTOM, and I’m just about ready to publish the details.