For two months, my partners and I have been on the hunt for the most creative way to make sure that, when the slowdown becomes official, our portfolios remain solid, even prosper.

I bought gold coins in September for $1,203 an ounce, and I bought silver coins in October for $14.40 an ounce. I’ve cashed-out of growth stocks in the biotechnology sector, and I’ve shorted Hertz, the biggest rental car company in the world throughout 2018.

Herc Holdings, which is part of the Hertz Global Group, came down hard and that trade yielded a double digit return in a year that saw most hedge fund managers lose clients and money. 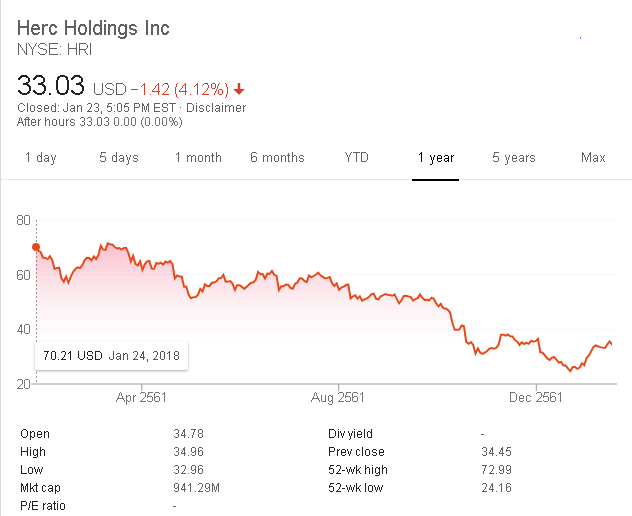 A slowdown hurts rental car providers, so I began looking at which of these had the most leveraged balance sheet and would be most susceptible to a market crash.

The demographic group, which is most vulnerable to economic downturns, is the millennial generation, since they’ve piled-on over $2T in student loans, have maxed-out credit cards, and are not buying cars, as a general rule.

Since they mostly reside in the large metropolitan areas, they led the epic growth of ride-sharing services like Uber and Lyft, but these services have clogged the streets with more traffic than ever before.

The municipalities don’t like this because it creates pollution and noise.

The fastest company ever to reach a $1B valuation, Bird, which is all about mini-scooters, so immediately I wanted to see what their competition looked like. This is the future of commuting in cities, after all.

We all know Starbucks wasn’t the first to produce coffee, yet it has succeeded more than any other coffee chain. The same goes for Facebook and Twitter that came after Myspace. Google wasn’t the first search engine, either, but often being a pioneer comes with many challenges.

The first-mover advantage is critical in some aspects, but when it comes to products that cost a lot to manufacture, entering the sector, once the dust settles is much more prudent.

Seeing the mistakes committed by the company that originally paved the way for others, allows the new entrant to capitalize on efficiencies and rival the first-mover with far less friction. After all, their prospective clients are already educated on the product.

We’ve found LOOPShare LTD (TSX-V: LOOP & US: LPPPF), which could see exponential growth, effective immediately, as commuters downsize and want the most effective way to get around the city.

This company is tiny in size right now. It is, essentially, a start-up.

Their scooters are electric and are extremely cost-effective. As opposed to the competition, these are fully operational on roads, not just on sidewalks.

I have been speaking with their CEO for weeks. What’s most impressive about these scooters is that they come with a dashboard screen, so the company will be looking at ways to monetize the screen to generate ad revenue and other streams of income, as I see it.

Many large cities are looking at legislation against car ownership, due to traffic and pollution.

As the billionaires at Davos continue to issue warning signals about the global transition into a recession, this start-up is the ideal way to hedge the broad stock market susceptibility to a crash, by locking a position with a business that actually benefits from downsizing and cost-cutting.

We recorded an interview with their founder, and we will publish a full report on the company in a matter of hours, including their ambitious expansion plan, the cities they are operational in, how advanced their GPS technology is, and how affordable their scooters are.

As it stands, the entire market cap is CAD$2M!

Normally, at this size, start-ups look for angel investors, who are willing to fund growth, but this is a rare gem because we can become shareholders and not play second fiddle to accredited investors, who make the lion share of the early gains.

Legal Notice:
This work is based on SEC filings, current events, interviews, corporate press releases and what we’ve learned as financial journalists. It may contain errors and you shouldn’t make any investment decision based solely on what you read here. It’s your money and your responsibility. We have been compensated two hundred and fifty thousand dollars, directly by loopshare ltd, for a one year marketing agreement. We have also participated in a private placement and own shares of the company, we will not sell during any active email coverage. The information herein is not intended to be personal legal or investment advice and may not be appropriate or applicable for all readers. If personal advice is needed, the services of a qualified legal, investment or tax professional should be sought.