This Will Be the Determining Variable

Under the fiat monetary system, which has lasted for 51 years already, we’ve only had five eras of deteriorating EPS, accelerating inflation and bond yields surging, and in those times, stocks perform lousy.

2022 is precisely like that; it’s been a horrible year and we believe that Big Tech companies fighting each other will cause more turbulence, which is a positive catalyst for gold.

Hedging a portfolio with precious metals is the recipe of 2016, and we believe it is making a comeback in 2022!

As you can see, the correlation between the central banks and their dovishness and the performance of Big Tech companies has been astounding, and now central banks are throttling back in a major way.

Netflix and Facebook have already been hurt, but we really haven’t seen Apple, Google and Microsoft damaged yet. The only one that looks both cheap and attractive is Amazon. 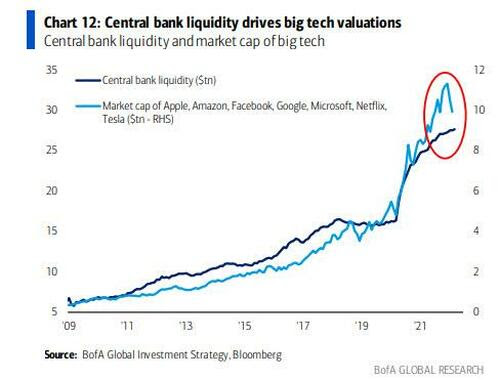 The central banks are not the only factor impacting stocks; interest rates are going to continue going up, because inflation is proving to be sticky as hell!

What doesn’t get nearly enough press and media attention are bond yields. I am going to show you a couple of charts, which you really should consider carefully.

It was over 80 years ago, when the Bretton-Woods agreement was being created, that government bonds saw such a spike in yields, but none of the living money managers and investors have ever had to deal with this issue.

For 40 years, bond yields have been going down, dipping below 0%, an economic phenomenon no one thought possible, but there’s a real chance this is ending. If that’s the case, the burden on borrowing will be stressful for Washington and other indebted countries, as well as a true U-turn for the TINA (there is no alternative) portfolios.

Individuals usually do not touch government bonds; their next-to-nothing yields, which are dwarfed by inflation, make them unattractive.

Even today, after the 18% drop – making it one of the most severe pullbacks of the past century – lending Washington money for 10 years only brings back 2.5%. 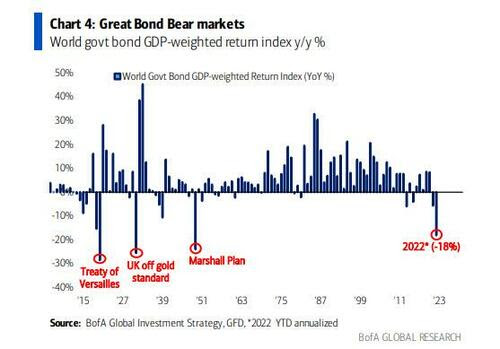 If we’re entering a decade of positive yields, as the below chart suggests, the consequences will be huge!

For one, it means inflation will remain very high for years to come…

Secondly, it means that stocks will underperform their historical averages…

Thirdly, it means that real estate prices will be lower…

In other words, it simultaneously makes most assets more affordable and life less fun.

This chart is pretty unbelievable!

What I think we should all be aware of is that if the current steps being taken to cool off the inflationary mega-pressures don’t pan out, the coming decade will be bad.

In the next few months, the welfare and riches of the general population will be determined for the coming decade; the stakes are really high!