No one should get overly bullish and begin to assume gold will hit $2,500/ounce by summer. This is NOT how this will play out; traders must exit, take profits and make way for new money to come in.

Gold is not a retail story yet; gold hasn’t caught the eye of the millennials yet.

What we want to see is more buying coming in, every time that gold tests the support.

When gold hit $2,000/ounce over the summer of 2020, silver enjoyed overwhelming retail support.

If you remember, July 2020 was the best-performing month for silver since 1980.

We warned that this is what euphoria looks like, but no one likes to listen to prophets of doom, when things are peachy and rosy.

I’m warning that an increase in the cost of nickel, which saw an unprecedented short squeeze that sent prices on the London Metal Exchange up as much as 250% in two trading days, is an event equivalent to the GME (GameStop) episode in January 2021; it’s a sign of a top. 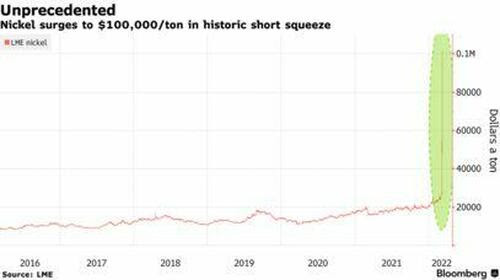 ​The FED must now prioritize its dual mandate, because no one single decision will ever be able to solve all of the issues we face, and for the first time in years, the FED is not expected to do so.

For several months, I’ve been listening to politicians grill Jerome Powell in his testimonies, firing questions at him about things like climate change, port congestions, and union regulations. These are all things the FED can’t influence, and Powell is even wisely choosing not to comment on them.

The government realizes that this is on them; if they want chips to be manufactured at a faster pace, then they need to speak with the CEOs of the large chipmakers and ask them what it would take to increase production.

If the government wants to run smoother ports, they need to ask the port authority what automation, software systems, training and upgrades it needs and what other equipment is missing.

If the government wants to see more builders developing smart communities or affordable housing units, they need to assist in paving the way for them to feel reassured they aren’t constructing homes into a recession.

The Russian invasion has already tightened financial conditions by a lot, so Portfolio Wealth Global believes the FED will raise rates by 0.75% or as much as 1.00% in 2022. However, the outlandish predictions of 6, 7, 8 and 9 rate hikes are off the table, as far as we’re concerned.

Here’s how tight conditions have gotten in the past two months: 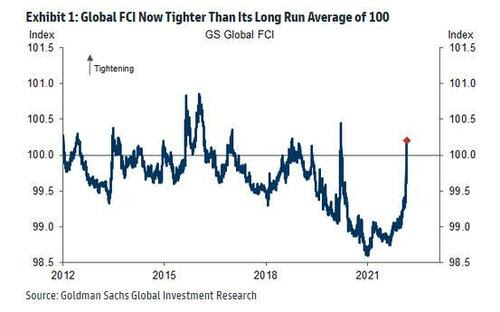 *** IMPORTANT: Stocks are in a bear market. It will not end, until more pressing issues are solved. It is a wall of worry that buyers can’t climb, so one by one, brick by brick, the FED will raise rates and the world will not end. Then, Russia and Ukraine will shake hands and find a way to co-exist, Americans will vote in the midterms, and finally, we’ll be back to growth and a bull market, but not yet. ***