The Most Misunderstood Gold Company

This company is up 84% in the past year and, actually, its share price is up 220% since March!

Still, when looking at the price appreciation of the overall sector, this company remains in DEEP VALUE TERRITORY, both in our opinion and in the opinion of institutional analysts, which target much higher share prices for this company.

Recently, institutional money has been attracted to the RISK/REWARD proposition of the company, since the CEO, Mr. Dan Wilton, has worked wonders to get the market to appreciate the TRUE POTENTIAL of this stock’s portfolio of gold projects. It’s seeing HIGHTENED ATTENTION, and with it, came higher prices, a trend that’s likely to continue.

First Mining Gold Corp. (TSX: FF & US: FFMGF) and its PORTFOLIO of GOLD PROJECTS look better by the day, in our view!

The first thing to notice is that FOUR SEPARATE institutional analysts have given the company PRICE TARGETS of CAD$1.00, CAD$1.20, CAD$1.40 and CAD$1.50, which represent between 100% and 200% upside potential in the next 12 MONTHS ALONE!

If you’re more patient than that, the upside could be MUCH GREATER, since several major catalysts are IMMINENT.

It really begins with the company’s MOST IMPORTANT asset, the Springpole Gold Project, which at $1,500/ounce gold has a Net Present Value of CAD$1.6bn (and much higher at current gold prices), but the market is giving it ESSENTIALLY ZERO VALUE!

I can prove it to you QUITE EASILY: 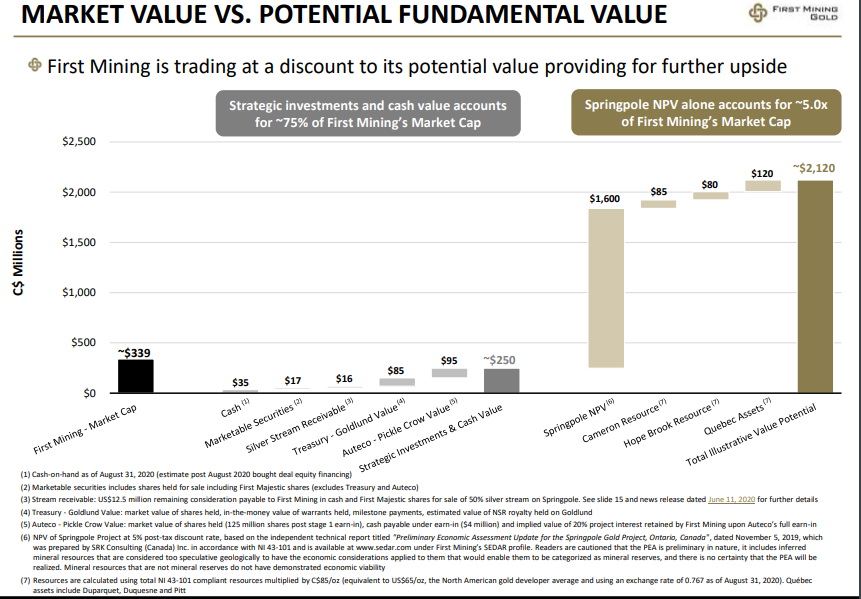 You can see that the company’s cash, marketable securities, silver stream receivable and additional strategic investments are valued at CAD$250M, while the market cap of the company is CAD$340M.

This means that the company’s assets are getting a price of CAD$90M, while Springpole alone, at a $1,500/oz gold price, has an NPV of $1.6bn which represents 0.05x NAV and is significantly below its peer group. The company is working on the project’s PFS (Pre-Feasibility Study), which it expects will be out by early 2021: we believe that Springpole is still one of the most undervalued assets in the gold sector!

The PFS, which is expected to come out in early 2021, will allow management to declare “reserves” for the first time at Springpole – a very significant milestone for the project!

Combined with the value of the marketable securities and strategic interests that First Mining Gold owns, currently worth CAD$250M, we arrive at a hypothetical market cap of greater than CAD$1bn, which is THREE TIMES (200% gain) today’s market cap! 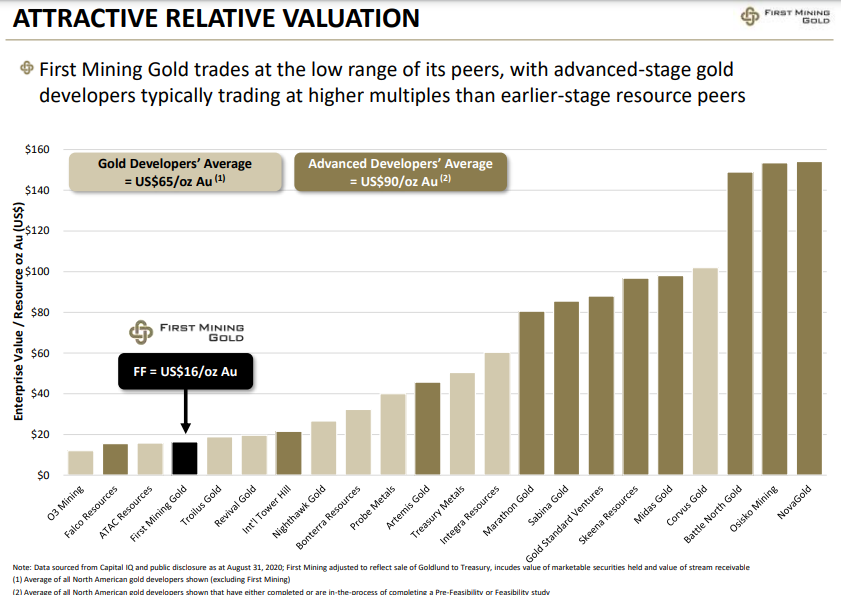 This UNDERVALUATION is clearly shown in the chart above, which shows the 75% discount to the AVERAGE DEVELOPER!

One company that IS TOTALLY ON BOARD with Springpole and believes that it could reach production is the world’s purest SILVER COMPANY, First Majestic Silver. It is investing USD$22.5M in the project, in exchange for a 50% silver stream (which can be reduced to 25% through a buy-back option that First Mining Gold has) on Springpole silver production. This deal provided a LESS DILUTIVE funding source; plus, the stream solely relates to the silver by-product, leaving the gold reserves unencumbered!

Think about that VOTE OF CONFIDENCE!

Today, this blatant undervaluation is HANDING THE BULLS a chance to buy at a significant discount. The four institutional analysts and Keith Neumeyer’s First Majestic Silver, among other mining veterans see a CLEAR OPPORTUNITY.

First Mining Gold Corp. (TSX: FF & US: FFMGF) is at a point in the company’s life where the DE-RISKING PROCESS has resulted in value-creating advancements for the company; First Mining Gold’s portfolio of established gold resources in Canada remains a unique strategic asset, which few companies OWN and that will not change.

The MERE FACT that First Mining Gold (FFMGF) is fully funded to achieve key milestones, having just attracted significant institutional investors to the company in its latest CAD$28.75 million financing, is a testament to the SHEER MOMENTUM created in the past nine months, as three KEY TRANSACTIONS have been inked on three of its six key gold projects: Springpole, Goldlund and Pickle Crow.

The company’s INITIAL STRATEGY, when it was still private in 2014 and 2015, was constructed by founder Keith Neumeyer himself. It was all about buying the BEST GOLD PROJECTS available in the depths of the bear market in order to capitalize on the WORST SENTIMENT and the ideal distressed conditions which prevailed in those years.

The strategy proved itself, since among Springpole, Goldlund and Pickle Crow, along with three additional gold assets, the company has amassed an impressive asset portfolio of gold and silver resources.

Their cost for acquiring their gold projects was around $10/ounce equivalent, whereas today it takes companies around $100/ounce to pull off the same feat; what Neumeyer did is NOT REPLICABLE in 2020!

Springpole is such a BIG and UNIQUE project that it could be the company’s ONLY ASSET and still bring its valuation to a BILLION DOLLARS, yet First Mining Gold has other million-ounce gold projects and strategic positions.

The company’s OTHER ADDITIONAL gold properties include Pickle Crow, Cameron and Hope Brook, and the company also holds a very large equity position in Treasury Metals following the recent sale of the Goldlund gold project to Treasury Metals to create a MULTI-MILLION OUNCE GOLD DEVELOPER:

1. Treasury Metals is undertaking a PEA (Preliminary Economic Assessment) on a co-development scenario of the Goldlund and Goliath gold projects, which we believe is going to be a MAJOR CATALYST for potentially higher share prices!

The transaction with Treasury Metals to advance Goldlund consolidates two mining projects next door to each other, so the development plan will likely contemplate building one mill to process ore from two mines. First Mining Gold (FFMGF) now owns 39% of Treasury Metals; this share position alone is currently worth $65 million. Add to that the warrants, royalty and deferred payments and the overall value of the transaction to First Mining Gold and its shareholder is worth MUCH MORE! 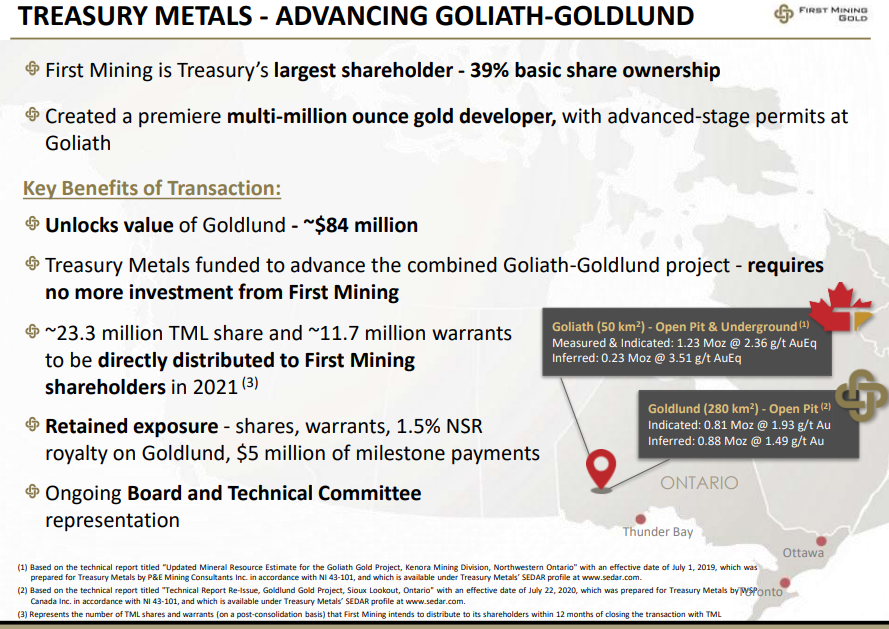 The third asset that is RAPIDLY getting de-risked is Pickle Crow, which is currently being drilled by Auteco Minerals and, AGAIN, is receiving little value from investors, even though there’s a 45,000-meter drilling program underway at the high-grade gold project that has BIG POTENTIAL.

Auteco Minerals is a very talented exploration team with a proven track record of finding high-grade gold in past producing gold camps. 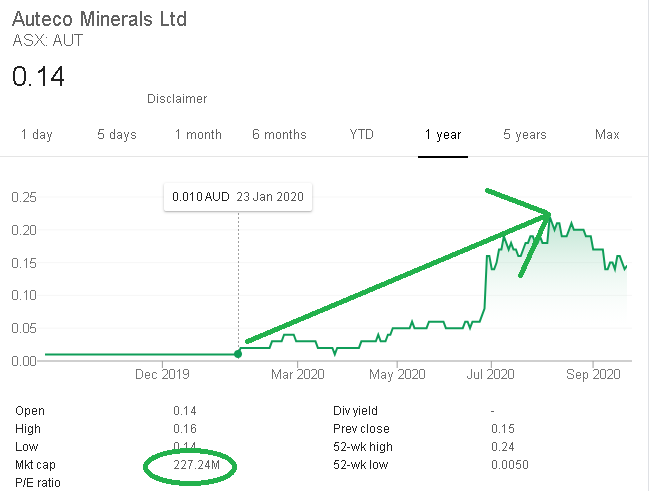 I love the diversified portfolio that First Mining Gold has, and the fact that the company has over CAD$35 million in cash and no debt,with CLEAR CATALYSTS on the horizon.

The company’s other gold projects – Cameron, Hope Brook and its properties in Québec – all have the potential to be DERISKED and SURFACE VALUE as has been demonstrated by the Management team on its Pickle Crow and Goldlund projetcts.

The four analysts who cover First Mining Gold, who have given the stock 12-month targets of CAD$1.00, CAD$1.20, CAD$1.40 and CAD$1.50, go into further details on the geology of First Mining Gold’s projects. 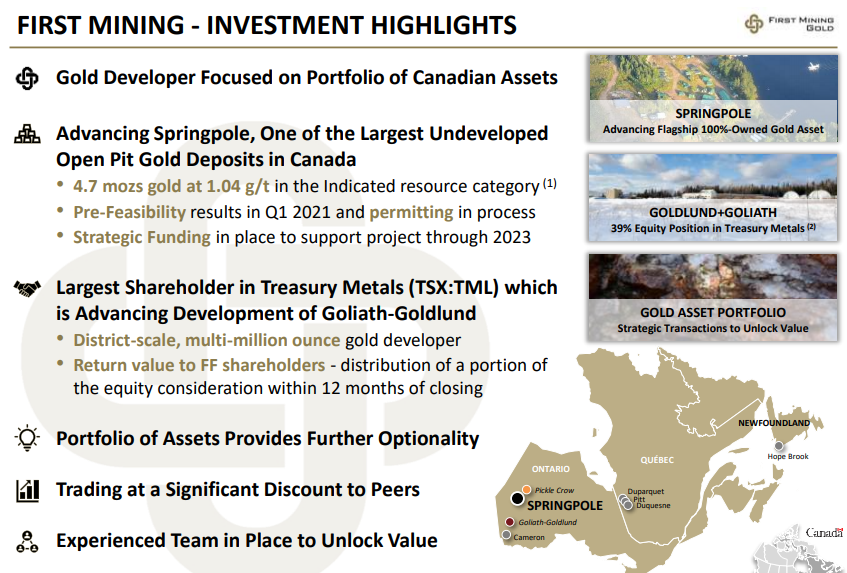 Disclosure/Disclaimer: We are not brokers, investment or financial advisers, and you should not rely on the information herein as investment advice. We are a marketing company. If you are seeking personal investment advice, please contact a qualified and registered broker, investment adviser or financial adviser. You should not make any investment decisions based on our communications. Gold Standard Media LLC, owned by the same parties as Wealth Research Group LLC, has been compensated by First Mining Gold one hundred thousand dollars for a thirty days public awareness campaign. At the time of reading this report, we may be buying or selling any of the securities mentioned in it. We have no business ties with either of the companies. Our stock profiles are intended to highlight certain companies for YOUR further investigation; they are NOT recommendations. The securities issued by the companies we profile should be considered high risk and, if you do invest, you may lose your entire investment. Please do your own research before investing, including reading the companies’ SEC filings, press releases, and risk disclosures. Information contained in this profile was provided by the company, extracted from SEC filings, company websites, and other publicly available sources. We believe the sources and information are accurate and reliable but we cannot guarantee it.