I found a company that no one is talking about. Even a Google search only brought up a few reputable hits – it is completely, utterly, and without a doubt, under everyone’s radar

In fact, I could be facing serious friction from sophisticated speculators, who have also discovered this stock and are quietly accumulating every possible share they can get their hands on at this price.

It is so cheap that any single wealthy investor could make a bid for the entire business right now!

We’re talking about a CAD$3.5M company, which is about USD$2.6M – it’s, by far, the most unique opportunity I’ve found in the past three years.

I can’t confirm this, but I’m pretty certain that a number of accredited investors, worth several million dollars, who are experts in the mining business, won’t be pleased with the fact that Portfolio Wealth Global has uncovered this deal.

In the mining business, the most important development, impacting the destiny of any particular stock, is making a discovery and releasing news regarding a positive drilling result.

Think about the implications of announcing to the investment community that the dirt you own, the land package, which management bought for pennies, is officially full of gold.

There’s nothing that compares to this in the stock market, and it is the reason that a mining operation could return absurdly high capital appreciation.

The most important thing you have to know about exploration-stage plays is that they are the riskiest, most speculative plays in the gold market.

The second most important thing you must know is that if you don’t position ahead of the news, it’s worthless to chase the stock higher.

Take a look at this recent discovery:

This incredible move happened a year ago, in 2017.

To give you an idea of how remarkable that is, the chart you are looking at portrays only 120 days of trading action.

This isn’t the only company to release strong drilling results – there are several of these every year.

Pre-discovery, this company was worth CAD$10M. Right after discovery, the valuation adjusted to CAD$40M, a CAD$30M appreciation.

This is what a good-sized discovery is worth.

The company I’ve found is worth only CAD$3.5M. If it makes a discovery, worth CAD$30M, the stock price would go parabolic, a potential 1,000% profit.

Finally, look at this:

This is another recent example of the same flow of events in action:

Consider becoming a shareholder of Harvest Gold (TSX-V: HVG & US: HVGDF), the most unknown and under-the-radar gold stock ever.

This could be the next company to release news of a successful drilling hole because their terrain has NEVER been explored before!

Tomorrow, I’ll show you exactly where their asset is, who their geologists are (they have made FOUR major discoveries before!!), and two previous companies that the CEO has led in his career, which have gone up 20-fold, a 2,000% gain.

I rarely become this excited, but the potential here is unbelievable.

Mr. Rick Mark and I have been communicating with each other for over a month.

I first learned about Mr. Mark because of his leadership role with VMS Ventures INC., which, in 2007, was trading at CAD$0.06, when he joined as CEO.

Rick specializes in “discovery investment” stocks, as he told me yesterday. He finances a prospective asset for the sole purpose of drilling it and taking the mystery out of the equation, revealing the mineral value in the ground.

With VMS Ventures, under Rick’s leadership, early shareholders, who got in at CAD$0.06 in early 2007, saw the stock chart forming a hockey stick formation by October, when shares were trading for CAD$1.70.

Some people would call this lucky, until they realize that Rick Mark has done this for a second time.

In 2011, he came back from retirement to lead Greenland focused, North American Nickel, which he, again, took from CAD$0.06 to an astonishing CAD$0.68, on the back of strong drilling results, in a matter of months.

Rick has now come out of retirement for the third and probably last time to launch his third deal.

The stock price is CAD$0.06 once more. In fact, the entire market cap is a mere CAD$3.5M. It’s another “discovery investment” play in a jurisdiction infested with major gold mines and world-class mining giants, but this particular asset has never been drilled, EVER.

The upside is, for all intents and purposes, unknown. This could be a big-time mineralized asset because all the early sampling and surveys have come back, showing jaw-dropping grades.

This isn’t any ordinary exploration play, either.

It is a joint venture with Evrim Resources. Check this out: 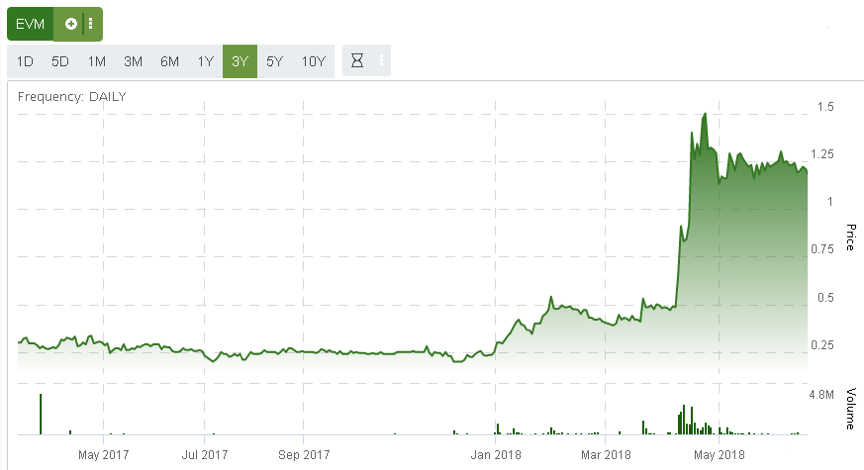 The Evrim Resources' geologist team made a huge discovery back in April, which shot up their share price like a bullet out of an M16.

These are the same people, who discovered the Cerro Cascaron project as well. Now, they are about to start drilling there, as part of their JV (Joint Venture) with Rick Mark’s tiny exploration company, which has optioned up to 80% of this asset and has never been drilled before.

The same geologists, who just made shareholders of Evrim Resources a ton of cash, are about to drill a new project, but this time, they are doing it on behalf of Harvest Gold Corp (TSX-V: HVG & US: HVGDF), which owns the rights to Cerro Cascaron in Mexico.

Consider shares of Harvest Gold Corp (TSX-V: HVG & US: HVGDF) immediately because drilling season is about to start, and between now and the end of the year, Rick Mark could potentially be announcing the third, huge discovery of his career.

I only have room for one exploration stock in my portfolio because of the immense risk involved. Harvest Gold (TSX-V: HVG & US: HVGDF) is the one I’m betting on.

Harvest Gold is exceptionally cheap, only valued for CAD$3.5M, in total. If it makes a similar discovery, which adds even a quarter of the value Evrim’s Mexican discovery ($80M * 0.25 = $20M), shares would be 700% higher than today’s.

Exploration success is rare, so we are putting our money in the hands of a geologist team, which has made several discoveries in Mexico, and it’s our best shot for game-changing profits.

Never base any decision off of our advertorials. Portfolio Wealth Global stock profiles are intended to be stock ideas, NOT recommendations. The ideas we present are high risk and you can lose your entire investment, we are not stock pickers, market timers, investment advisers, and you should not base any investment decision off our website, emails, videos, or anything we publish.  Please do your own research before investing. It is crucial that you at least look at current SEC filings and read the latest press releases. Information contained in this profile was extracted from current documents filed with the SEC, the company web site and other publicly available sources deemed reliable. Never base any investment decision from information contained in our website or emails or any or our publications. Our report is not intended to be, nor should it be construed as an offer to buy or sell, or a solicitation of an offer to buy or sell securities, or as a recommendation to purchase anything. This publication may provide the addresses or contain hyperlinks to websites; we disclaim any responsibility for the content of any such other websites. Compensated three hundred and sixty thousand dollars for a one year agreement. We also took place in a recent private placement and plan to be long-term shareholders. We currently own no shares outside of the private placement which has a four month hold. Please use our site as a place to get ideas. Enjoy our videos and news analysis, but never make an investment decision off of anything we say.