HITTING The SWITCH: Not A Pretty SIGHT!

These are some wild swings down. Between Amazon’s -18.4%, 1-month drop and Netflix’s -21.3% massacre, these darlings are proving that given the right amount of worry, no one remains untouched.

I can go down the list of stocks that have suffered huge price reductions, but the point is clear – October has been horrible: leading semiconductor giant, KLA Tencor, is down -15.2%. Leading casino operator, Las Vegas Sands, is down -13.9%. Shipping dominator, FedEx, is down -12.7%.

This sell-off is broad-based. No sector remains untouched this time around, not even beloved tech. 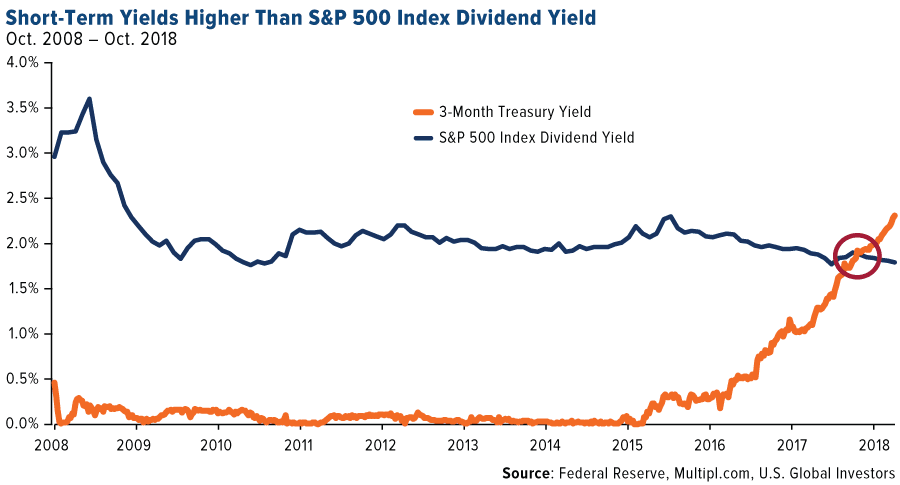 As the graph above shows, short-term yields are becoming quite attractive, so Portfolio Wealth Global is expecting CEOs to begin raising their dividend payments, over other possible fund allocation alternatives (paying down debt, making acquisitions, hiring or investing in growth).

The fact is that the S&P 500’s long-term dividend yield is much higher than today’s.

Since inception, the yield has averaged around 4.3%, which is more than double today’s 1.97% yield.

This chart shows the incredible effect that the bonds bull market, the 35-yr rally in bonds prices, since 1982 until 2017, has had on CEOs and their decision-making process.

We notice a systematic reduction in dividend distributions, as they didn’t have to compete with high yields.

The race is on again, though.

One of the most startling abnormalities of today’s U.S. economy is the clear problem with the way society has structured its wealth distribution process.

Take a look at what I mean by that:

If you break down the demographics of the United States into five sections, you can see that the bottom three quartiles are receiving far more benefits that the Federal Government subsidies offered than they can contribute to the tax system.

This isn’t anything now, but when this sort of discrepancy hits a melting point, with any society, political measures have to be taken.

Right now, in the U.S., one of the major concerns, on the federal level, is the fact that even though business is booming, the receipts come nowhere close to the outgoing expenses.

The problem is that the poor are not getting access to opportunities. No one enjoys poverty, nor wants to be a hassle on others. Most would rather pass on the $1,200 subsidies money, if it meant they could live a productive life, with the chance to excel.

Since monetary policies, such as the central banks have taken, only condemn the poor to more of the same, the government is getting forced to act, in fiscal ways, to bring opportunity to the masses.

The way to do that, of course, is by initiating programs to train workers, or by incentivizing businesses to hire in specific lagging zip codes or to lower the costs of education, by staying out of it.

I can assure you that the government is thinking about ways to open pathways for millions to move from low-paying jobs onto better paying ones.

We’ve hit the maximum when it comes to liquidity injections and central bank stimulus.

From here, the governments will need to eat the debt stew they have been brewing, by overpromising for decades, without thinking about the ramifications of “buying” votes.

Portfolio Wealth Global is under the impression that it is very likely that gold prices have bottomed, since we are seeing precious metals going higher, even in the face of the USD rally.

Inflation, from all fronts, is the issue, and we all know it.

This week will mark the flick of a switch. If the bulls (buyers) determine that stocks have real value, we will start to snap out of this correction, but if sellers prevail, you need to be prepared, as we could be headed into another week of madness.

If that is the case, Portfolio Wealth Global will publish an exclusive report on Tuesday regarding some essential strategies to implement right now.