I’ve spent hours listening to Jerome Powell’s testimony before Congress, which included some incredible revelations. For one, some members of Congress are so clueless that it hurts me to see them clogging the airwaves and even addressing Chairman Powell with issues that the FED has either no authority over or minimal expertise in. One particular instance was when one of them remarked on LIBRA, thinking it is actually LIBOR.

Powell made some very important comments, as did several of the more sophisticated Congressmen and women, who asked him about (1) the national debt, (2) income inequality, (3) the gold standard, (4) unemployment levels, (5) inflationary expectations, and a wide range of critical subjects.

One comment that struck me as unique is that Powell acknowledged that the dollar is the world’s reserve currency – and as such, we can, will, and should continue to issue more and more of it, without fearing the consequences in the near-term. However, there is ultimately a huge price to be paid.

This comment totally ignores the fact that other countries are de-dollarizing, which could accelerate and dethrone the USD far sooner than Powell believes, to which Powell addressed that Japan is issuing massive amounts of new currency units, without the blowback of inflation, but he, again, ignored the fact that it is mostly financed by domestic lenders, not foreign ones.

Secondly, Powell rightly talked about the fact that while the Federal Reserve is in charge of reaching maximum employment and price stability, they really need supportive government policies to achieve that. Washington, for example, has to find ways to incentivize corporations to train employees, who are on the sidelines, find daycare solutions for single moms and commuting solutions for those that lack the ability to get to the workplace.

For now, what we know is that the FED has lowered their neutral rates to 0.5% in real terms, which means that the FED will cut rates at the end of July, unless a miracle happens.

The FED is worried about events happening in other countries as well and how they affect price stability and employment in the U.S., such as Brexit.

Powell did get a question from a gold hater, who asked him whether or not we should return to the gold standard. His reply was a mixture of bullshit and lies. He first said NO, and then justified it by saying that by maintaining a gold standard for the dollar, the FED could not make sure that prices remain stable and unemployment remains maximized.

He then said that ALL countries abandoned it decades ago, because it’s volatile.

What a load of BS!

For one, Nixon took the dollar off the gold standard; this forced other countries, which were on the $35/ounce redeemable illusion, to retain their dollars and give up on gold. Secondly, he is outright lying when saying that gold is volatile. GOLD is fixed, while the value of fiat currencies changes and affects gold’s price.

Powell did say that America is living way beyond its means and enslaving the next generations by consuming today with tomorrow’s dollars, but that this doesn’t have to result in immediate changes to interest rates, because the world is forced to buy dollars.

The last comment he made worth mentioning is that he doesn’t personally foresee a major downturn, and that America’s greatest worry should be that interest payments on its national debt make up 8% of its budget. He contends that this money should go towards education for the general public, since the competitive, developed world requires the U.S. to haul ass, basically.

This has been my message for years: as India and China continue to train a more skilled workforce, Americans must double up on sharpening their skills, or they’ll soon find out that even the little they have left is gone.

Having the world’s reserve currency status is a way of buying time, but without increasing productivity and elevating the participation rate by incentivizing more people to work, the U.S. is regressing, not advancing.

Silver prices immediately reacted to this by going above $15/ounce again; it is starting to build its base.

It will continue to go higher, as will stocks: 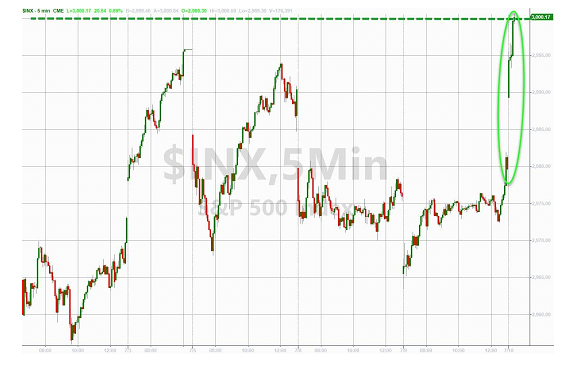 We’re now in the final stages of this grand monetary experiment and you MUST expect volatility.