There's a giant, new industry forming in the U.S., Europe, and Australia right now, with an emphasis on North America.

Early venture capitalists are already beginning to position, but these are definitely the early days of the 2ndwave in the consumer demand for beverages.

We already know that carbonated drinks, sodas, and sugared-juices have experienced sales declines for years, while energy drinks are on the rise. 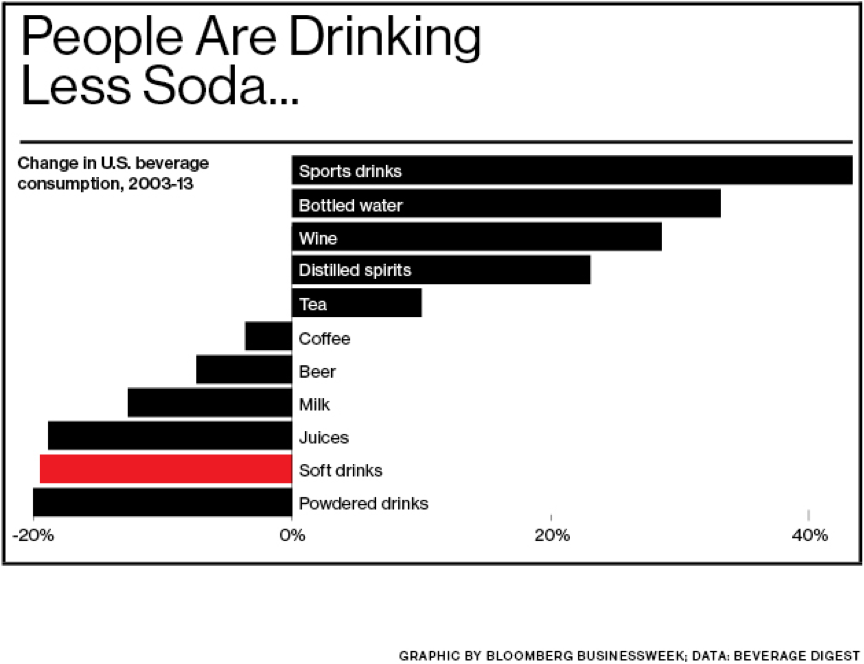 I was an early shareholder of Monster Beverages, before Coca-Cola took it over, so I know how profitable a new, successful stock can be (Monster is a rare 100-bagger).

That trade inspired me to research the cannabis industry four years ago, right after Colorado legalized it, and cover the best opportunities at Portfolio Wealth Global, our signature financial newsletter.

The idea being that cannabis offers the most monumental development in recreational substances since alcohol was made legal in the 1930s, and it is also a game-changing development in the medicinal front, which led us to many triple-digit winners over the past three years.

Portfolio Wealth Global follows major trends, while they are still under the radar.

While searching for another cannabis-focused business, my attention was diverted by a new segment called nootropics. 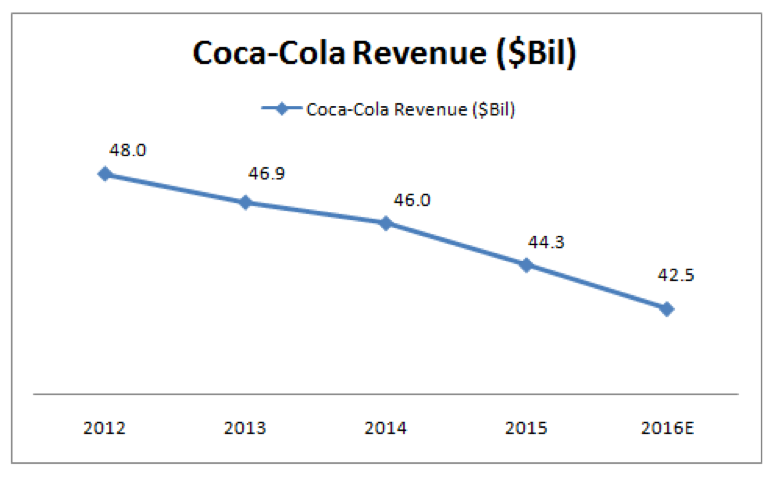 Beverages have created numerous hundred billion dollar companies over the past century, including Coca-Cola, Pepsico, Anheuser-Busch InBev (owner of Budweiser), Diageo (owner of Johnnie Walker), Constellation Brands (I hold a big position with them—owner of Corona Beer; the company just acquired a stake in a cannabis business as well), and many others.

The truth of the matter is that drinking is a must, and most people do not only settle for water.

Drinking is entertainment, but the newest consumer trends show that individuals now want nutritional value from their beverages, not just from their foods.

This is how our niche experts found nootropics. More importantly, we found a newly listed company (May 2nd, 2018 IPO), which also uses a proprietary formula that requires hemp oil.

Look into this company immediately!

Nootropics are cognitive enhancers, which are drugs and natural extracts that improve functions such as memory, creativity, and motivation in healthy individuals. These products are being sold to academics and professionals to maximize their brain function. 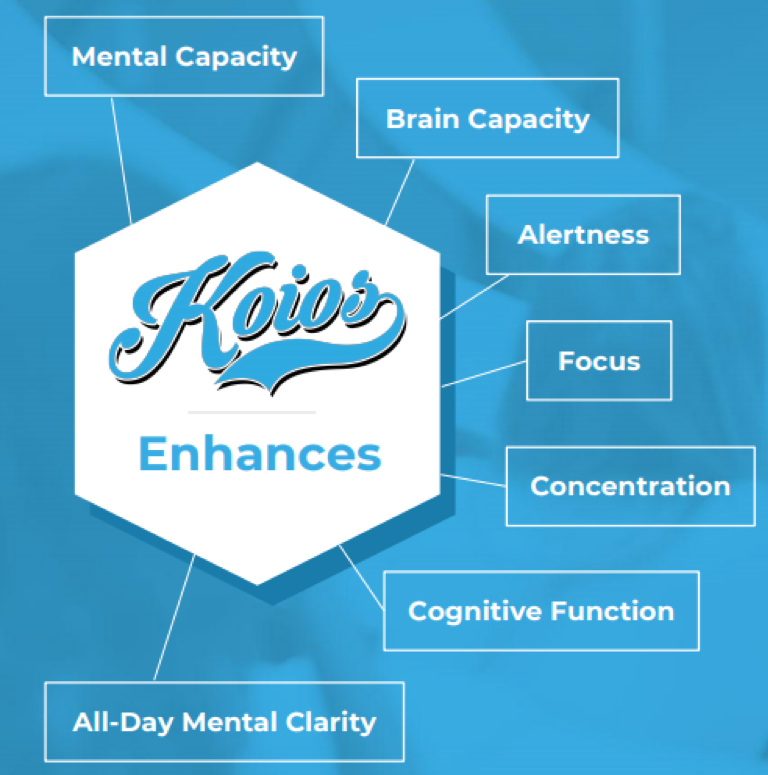 Everyone is aware that caffeine and the chemicals injected into our energy drinks are harmful, but now consumers are voting with their wallets.

Portfolio Wealth Global has identified a growing awareness among students and executives about the benefits of nootropics.

North America is the largest consumer of nootropics, which is why Koios Beverage (CSE: KBEV & US: SNOVF) focuses exclusively on this market.

Here are the key financial factors we uncovered: 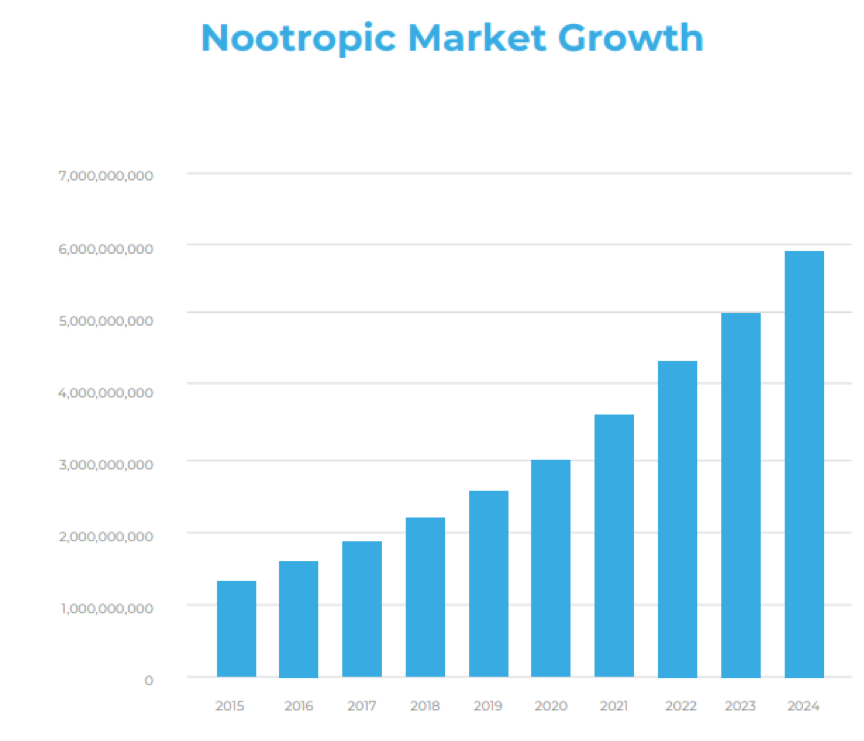 In fact, Koios not only has a line of drinks, but supplements as well.

About half of all adults take some kind of vitamin.

I already knew this was a tremendous growth industry, but when I saw Pepsico acquiring Kevita for $200M and Dr. Pepper making a huge play as well, I called my contacts in Silicon Valley. They confirmed that VC money (Venture Capital) is also pursuing to capture massive returns, as this new sector expands into Asia as well. As you know, Red Bull started in Thailand, though it was founded by an Austrian.

Performance drinks use many herbs and minerals known in the east, for centuries, as mental enhancers.

The idea, though, is to find a company that holds a proprietary formula and has an extensive distribution network.

Koios Beverages (CSE: KBEV & SNOVF), my No.1 nootropics play, has just that. 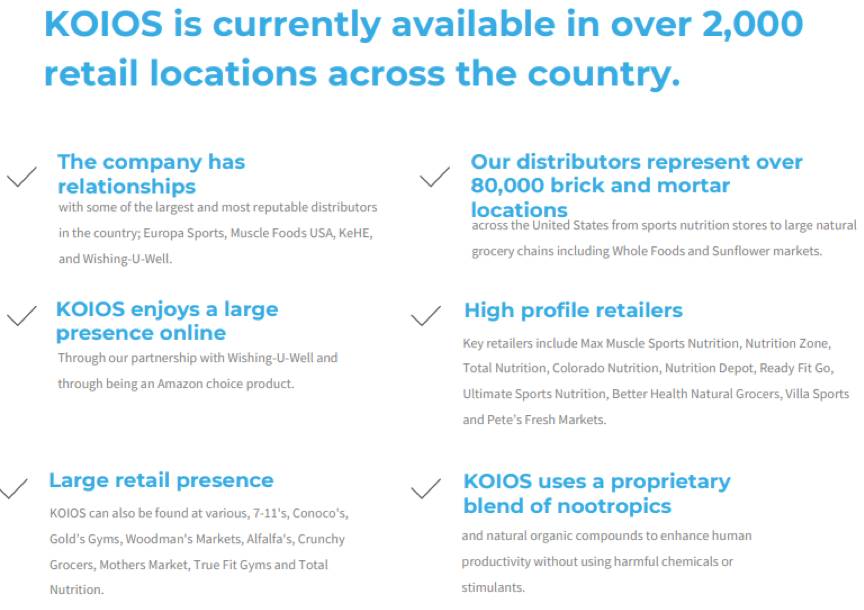 They are spread out among thousands of sales points in the U.S. and growing fast.

Their secret weapon is that they use MCT oil and hemp oil in a number of their products, so they appeal to a large segment of the population.

Their website is designed to educate and process online orders, while their retail presence is impressive; their availability on Amazon is a key advantage.

Portfolio Wealth Global is going to cover updates for the company, as well as release a CEO interview soon.

Never base any decision off of our emails. PortfolioWealthGlobal.com stock profiles are intended to be stock ideas, NOT recommendations. The ideas we present are high risk and you can lose your entire investment, we are not stock pickers, market timers, investment advisers, and you should not base any investment decision off our website, emails, videos, or anything we publish.  Please do your own research before investing. It is crucial that you at least look at current SEC filings and read the latest press releases. Information contained in this profile was extracted from current documents filed with the SEC, the company web site and other publicly available sources deemed reliable. Never base any investment decision from information contained in our website or emails or any or our publications. Our report is not intended to be, nor should it be construed as an offer to buy or sell, or a solicitation of an offer to buy or sell securities, or as a recommendation to purchase anything. This publication may provide the addresses or contain hyperlinks to websites; we disclaim any responsibility for the content of any such other websites. We have entered into an agreement for three hundred thousand dollars and five hundred thousand options paid for directly by the company. We have also purchased shares and are long the company.  Please use our site as a place to get ideas. Enjoy our videos and news analysis, but never make an investment decision off of anything we say. Please review our entire disclaimer at PortfolioWealthGlobal.com.