Is This Another Fakeout?

Before reading today’s overview of the bulls and the bears on precious metals, a massive update from Gold Mountain (US: GMTNF), whose shares are surging today!!

Gold’s price has gone from $2,070, its all-time high in August 2020 to $1,690 at its double-bottom, set in late March 2021. Since then, as inflation fears have greatly subsided (causing bonds yields to stabilize), gold’s price has shot up by $230/ounce in just two months!Many are rightly concerned that this is too fast and too bullish, myself included.So today, I want to go over what is going on and whether both gold and silver will pull back in June:

The jobs market lets investors know whether or not there’s a chance the economy will get over-heated, causing the FED to tighten sooner. Stock prices are greatly impacted by interest rates.The lower rates are, the more investors pay for stocks, in general, since chasing yields in bonds becomes risky and speculative with junk-rated debt, which pays higher returns.

The market anticipates a 0.4% increase, but if we get a big beat, it will be awful for markets, again because inflation will be the boogeyman.

This is where Jerome Powell will explain what the FED believes should happen with regard to the economy as well as additional stimulus.

If they stay nonchalant towards the booming economy, not fearing any significant imbalances, this will be a strong message in the face of all of this clear inflation in commodities, real estate and margin debt. 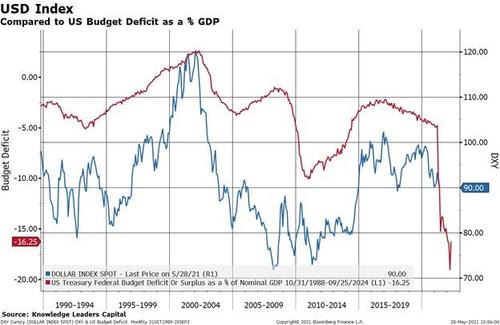 What we’ve never seen in the past 30+ years is a situation where the red line – which is the size of the deficit relative to GDP – is so indicative of a far weaker dollar, without seeing a collapse in the DXY chart.Right now, the dollar is clinging onto the 90.00 points support level, but if the dam breaks, precious metals could go a heck of a lot higher, especially silver.We’ve already seen corn, soybeans, and wheat trading at multi-year highs. Even a food item as basic as chicken wings is priced at record highs!Building materials like copper and steel are soaring in price, as are eating and living. With used car sales skyrocketing, driving places is also becoming more expensive. 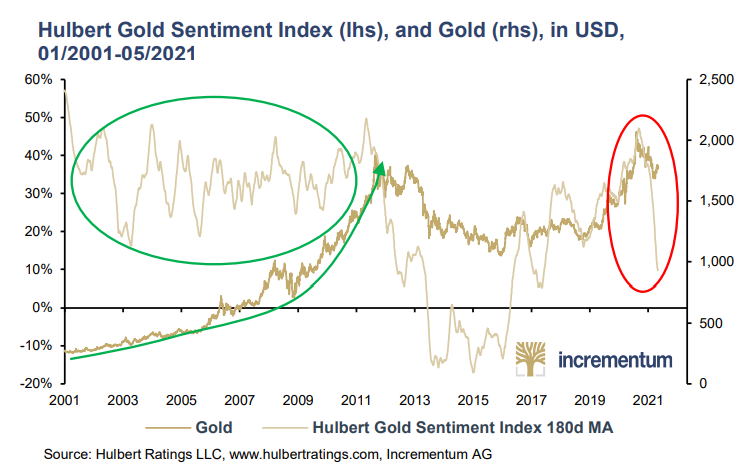 As you can see, though, sentiment towards gold is still super-low!In other words, even with this huge rally, people do not trust the breakout and that’s healthy for a bull market.My opinion is that the dollar’s fate will be determined around mid-June, and if it plummets, gold is going above $2,000 again.

We are not securities dealers or brokers, investment advisers or financial advisers, and you should not rely on the information herein as investment advice. We are a marketing company and are paid advertisers. If you are seeking personal investment advice, please contact a qualified and registered broker, investment adviser or financial adviser. You should not make any investment decisions based on our communications. On May twentieth twentieth twenty one, in connection with our agreement with Gold Mountain Mining Corp, we received a total of four hundred thousand dollars, paid to Gold Standard Media LLC. We contracted with Gold Mountain Mining Corp to provide advertising services for a period of twelve months. Examples that we provide of share price increases pertaining to a particular Issuer from one referenced date to another represent an arbitrarily chosen time period and are no indication whatsoever of future stock prices for that Issuer and are of no predictive value. Our stock profiles are intended to highlight certain companies for your further investigation; they are not stock recommendations or constitute an offer or sale of the referenced securities. The securities issued by the companies we profile should be considered high risk; if you do invest despite these warnings, you may lose your entire investment. Please do your own research before investing, including reading the companies’ SEDAR and SEC filings, press releases, and risk disclosures. It is our policy that information contained in this profile was provided by the company, extracted from SEDAR and SEC filings, company websites, and other publicly available sources. We believe the sources and information are accurate and reliable but we cannot guarantee it.Please read our full disclaimer at PortfolioWealthGlobal.com/gmtndisclaimer​