MARKET NOSEDIVING: This is UNPRECEDENTED!

The Energy has Left the Room

In 1901, a mechanical engineer by the name of Walter married his childhood sweetheart, Della Forker, and they settled down in Salt Lake City, Utah. Walter had been a lifelong worker for the railway industry up to that point and, during that period, was employed by the Denver and Rio Grande Railway. Because he was so passionate about his career, other companies wanted his services, similarly to how Steve Jobs pursued Tim Cook and attracted him to Apple Inc.

Walter was convinced to leave the railway business, a mature industry, and join the automobile sector, which was in its infancy. His first role was with the American Locomotive Company at a starting salary of $8,000/annum.

In 1908, though he only had $700 in savings, Walter wanted to purchase his first vehicle.

Obviously, you’d think the guy was nuts, a dream chaser and a reckless spender, not to mention a debt slave. His friends thought just that and let him have it!

To make matters worse, consider that he didn’t know how to drive. His neighbors and acquaintances were sure that Walter, usually a meticulous and capable person whose career was in trains, was derailed {pun intended}.

They viewed his financial decisions as rash and hasty, not to mention lunacy.

Walter didn’t even drive it at first. Instead, his neighbors watched as he started to take the Locomobile apart piece by piece, screw by screw, and then reassemble it. He did that so many times that he knew the vehicle inside and out.

Walter then took a job with General Motors for HALF the salary he was getting in the rail industry, where his reputation and brilliance were uncanny to delve into an unproven company still in its infancy. This convinced anyone, who wasn’t sure yet, that Walter was a crazy man.

Walter, in case you haven’t figured it out, is Walter P. Chrysler, a man forever remembered for completely revolutionizing the car industry. The Chrysler Building, a skyscraper named after him, stands today on the streets of Manhattan as a constant reminder of his willingness to look like a fool in front of everyone in the short term, in order to win the LONG GAME.

I don’t see any adjacent buildings to his, owned or named after any of the gossiping neighbors and cynics, who were probably reasoning and rationalizing all the various reasons why Walter Chrysler would fail.

Greatness, madness, obsession, guts, blind faith, determination; the thin line that is drawn between success and failure is measured in that extra step, that thing that doesn’t let the ones who want to truly achieve something to be shaken out.

The month of April was brutal, an absolute massacre, and what’s amazing about the stock market is that red days feel like the world is screaming at you that you’re a fool for buying more or holding, that you’re naïve, that you have no sense of the size of the bubble or that you don’t know history and it takes a genius to fight these emotions off and instead concentrate on the only truth of the stock market: You BUY when the world is BUSY with cashing out.

When CNBC is advocating that the general public go into cash and when the only parabolic chart in the world is that of the USD, you know that Walter P. Chrysler is smiling down at you and shouting, “OPPORTUNITY IS KNOCKING – DARE to LOOK like a complete fool for a while, because pain is temporary, but glory is forever.” 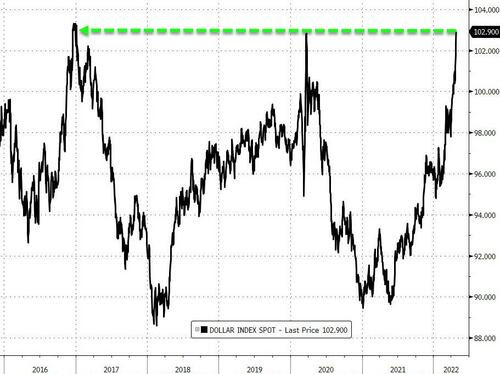