Gold Breakout: The USD is Gasping for Air!

After 6 Brutal Years of Bear Market Manipulation, the Price of Gold Surges Over $1,300…
The Most Profitable Opportunity is Owning a Mineral Bank! 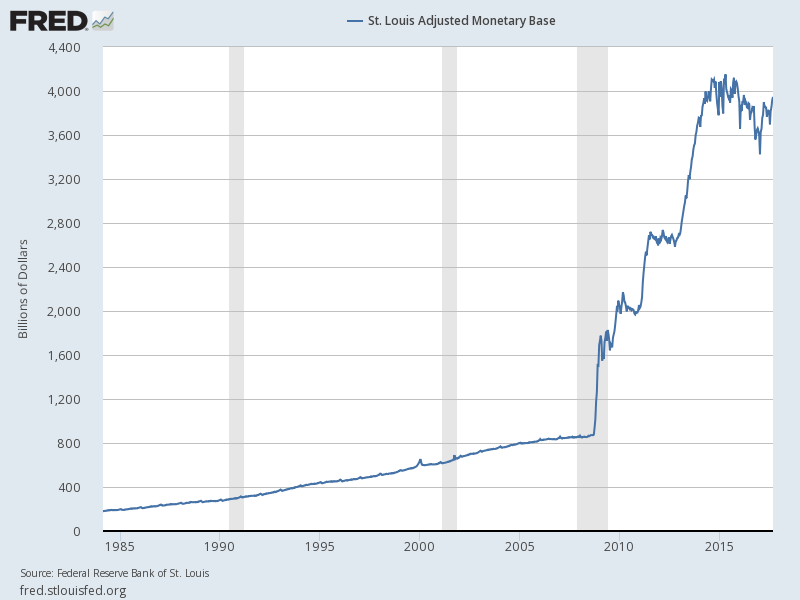 The Federal Reserve has used up its toolbox.

In 9 years, it has injected trillions of new currency units into the system, bought back $3.7 trillion worth of bonds and mortgage-backed securities, lied about every piece of economic data under the sun, lowered interest rates into negative territory for the first time in human history, and all of this comes at the expense of the taxpayers.

My name is Tom Beck, founder of Portfolio Wealth Global. Since we launched our newsletter, the main goal has been to educate investors on how the debt system works so that they can make wise financial choices.
It is absolutely possible to navigate the crooked fiat monetary system and become wealthy. I’ve been able to amass a 7-figure portfolio by the age of 33, and my main focus is gold stocks.

My strategy has always remained the same: put 90% of the due diligence into the people running the company because natural resources are a really small sector and there are a few world-class individuals who know it best and over-deliver time and time again for shareholders.

One entrepreneur stands out above the rest: Mr. Keith Neumeyer.

He has founded and built from scratch two billion-dollar companies, and the third one, which he founded a few years ago, will dwarf the previous two empires, as I see it.

First of all, it’s paramount to understand that gold prices are set to rise because double-digit inflation is coming.

Once the FED unwinds their balance sheet and the Chinese government bypasses the USD in oil contracts, the dollar will essentially flood the U.S. banking system and President Trump will use that to inflate as much of the national debt as possible.

Gold might trade for $2,000 one year from now, but even with today’s prices, the company Portfolio Wealth Global ranks as the No. 1 gold mineral bank opportunity has begun trading higher and has a 324%-769% upside potential in the next 12-24 months, our research shows! 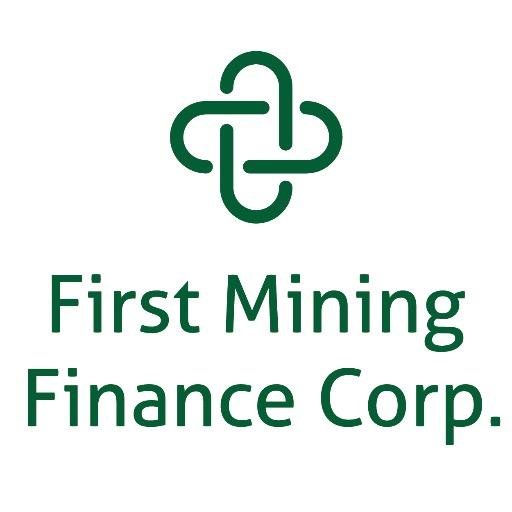 Most mining companies will make your guts turn over before they’ll make you money because it’s a highly cyclical and tremendously difficult industry.

On the flip side, a few key investments into the right companies have allowed investors who identified and positioned in them to add zeroes to their net worth.

First Mining Finance (TSX: FF & US: FFMGF) is the company you want to research right now.

The reason is simple: it’s designed from inception to outperform any other company of its kind.

You see, Keith Neumeyer is a mining legend since he founded and built the purest silver miner in the world.

His connections, skills, and commercial instinct have allowed him to launch First Mining Finance at a time when the gold market was the most hated and feared investment in the world: the depths of the bear market.

But for a genuine contrarian, that’s precisely when opportunities to find depressed valuations and distressed assets exist.

The problem is that 99% of financial backers want nothing to do with the sector, so it’s next to impossible to get the funds to acquire deals.

Keith Neumeyer, though, can attract investors because they understand his capabilities to weather storms and turn an idea into an incredible investment. 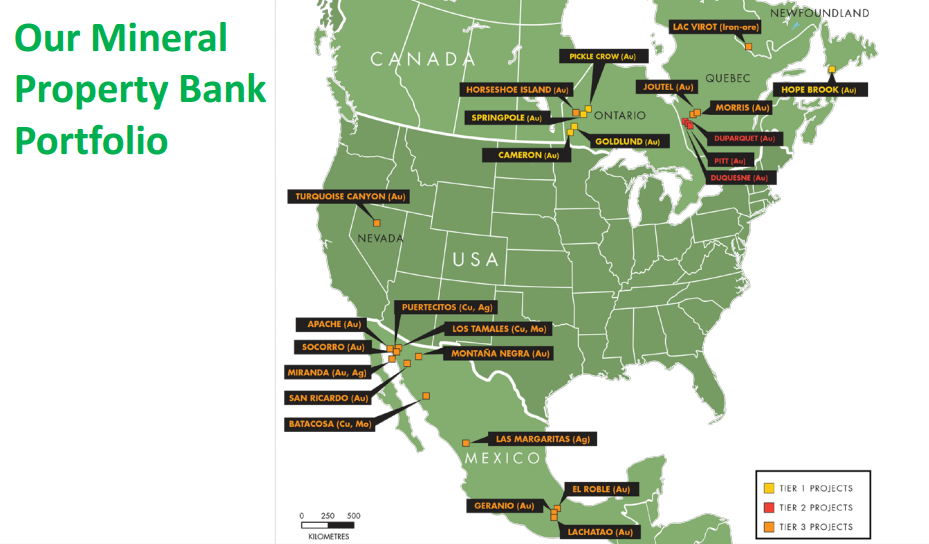 My partner recently came back from a site tour of their flagship properties, and I’ve sat down with Mr. Neumeyer for 3 days of discussion about where the company is going.

Here’s the bottom line: all of these properties were bought for about $8 per ounce of gold “in the ground.” Today, the cheapest you’ll get is about $40. No one can repeat this achievement today!

Now, the company is basically a “Mineral Bank” because it owns a significant amount of proven reserves and can continue to advance its properties because of over CAD$20M cash in hand and no debt. 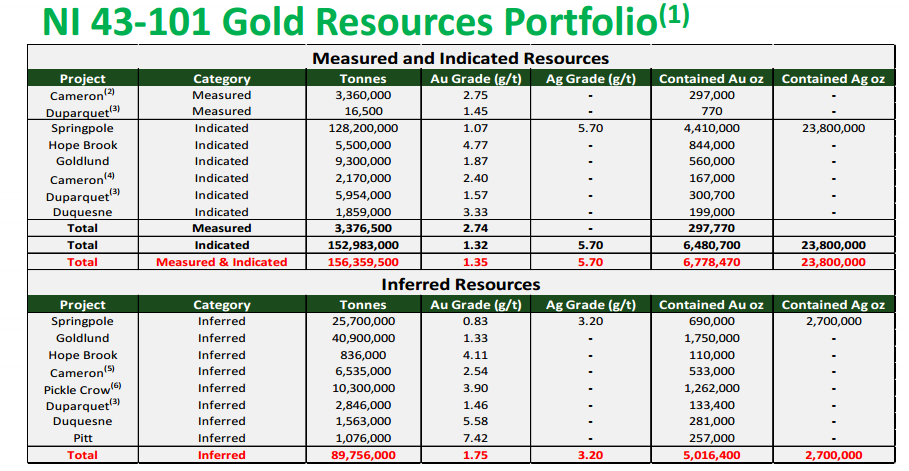 It’s important to fully realize how and why First Mining Finance will soar in price from here, as I see it.

Their most advanced-staged properties will be moved into PEAs, which means that their economic assessments will be made and they’ll prove that these can turn into cash-flowing, operating mines at current gold prices.

The market will immediately appreciate this and shares will explode.

They’ll also drill other properties in order to expand current resources in the ground.

The catalysts are perfectly aligned with gold’s market boom. 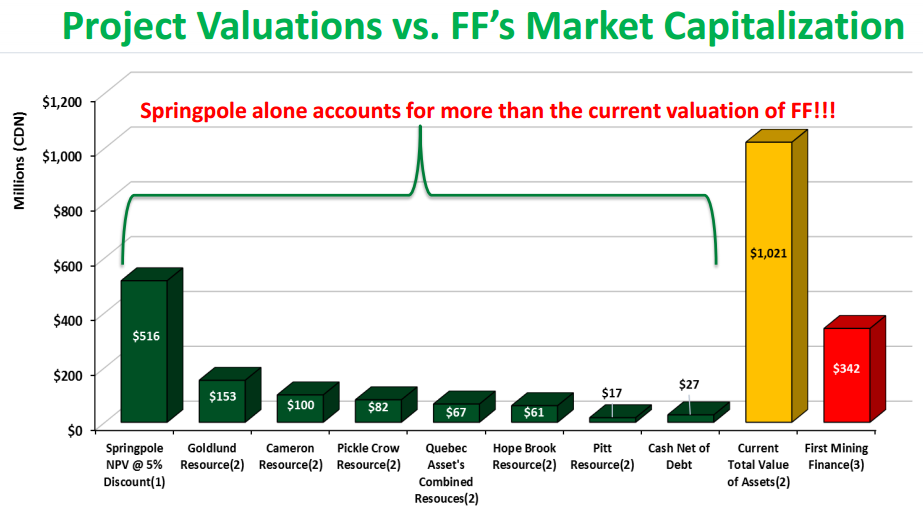 The company is incredibly undervalued, as you can see.

The Springpole project alone is worth more than the entire market cap today!

This work is based on SEC filings, current events, interviews, corporate press releases and what we've learned as financial journalists. It may contain errors and you shouldn't make any investment decision based solely on what you read here. It's your money and your responsibility. The information herein is not intended to be personal legal or investment advice and may not be appropriate or applicable for all readers. If personal advice is needed, the services of a qualified legal, investment or tax professional should be sought. Gold Standard Media, owned by the same owners of Portfolio Wealth Global LLC, was compensated one hundred and forty thousand dollars for an online marketing campaign. Please use our site as a place to get ideas. Enjoy our videos and news analysis, but never make an investment decision off of anything we say.

Be an insider of the breakthrough Resource Sector and stay well ahead of the game!

Get the Exclusive Report on how to profit from Gold now!