My name is Tom Beck, founder of Portfolio Wealth Global, and through extensive research and action, I’ve been able to dig through the financial presentations of 231 technology companies, and, without a doubt, nanotechnology is the most cutting-edge sector of all.

The best business model on the planet is one where you simply take an existing industry with strong demand and create a product that delivers that demand in a faster, cheaper, and more efficient manner.

Music is a great example – civilizations have been listening to it since the dawn of time.

First, it had to be live shows, but then recording began with records, then cassettes, discs, MP3 players, and iPods.

It’s the same music with a different delivery system – each time, the new system makes the old obsolete.

You see, electric vehicles are becoming mainstream, and Tesla is only one player in this exploding market.

BMW, Volkswagen, Chrysler, Ford, and GM are all putting together their takeover plans and market penetration strategies – electric cars are the next huge development in the auto industry.

The main problem is the cost of the batteries, and up until now, no group of entrepreneurs has been able to crack the process of making the raw materials needed. Cobalt, lithium, nickel, iron, and others need to be manufactured in a way that is cost-effective.

Nano One (TSX-V: NNO & OTC: NNOMF) is focusing on that business niche precisely, and it keeps progressing – we’re looking at a potential market shaker. 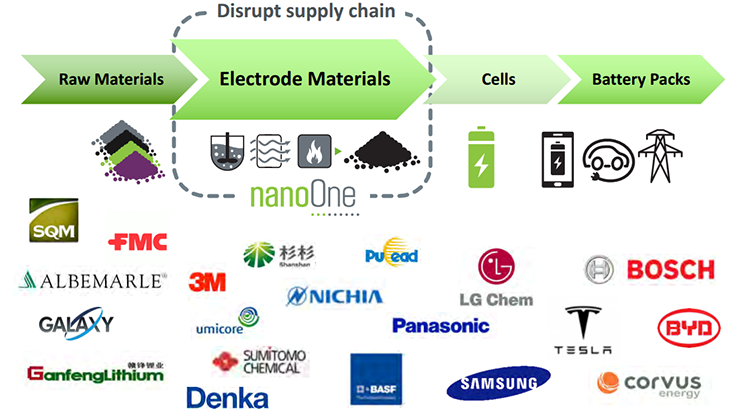 The reason why Portfolio Wealth Global is absolutely convinced that this company will become a big winner is that the management and scientific team are nothing short of A-list businessmen.

Now he is 100% focused on Nano One Materials, as this is the biggest opportunity on his radar.

In July 2012, Lithium One merged with Australia’s Galaxy Resources via a $112M plan of arrangement to create an integrated lithium company.

Before that, he managed to lead, as President and CEO of Potash One, a $434 million friendly takeover of the company by K+S Ag.

The deal that really struck me was when he led EMC, as one of the fastest growing Canadian companies in recent years, from a $10 million market cap in 2004 to approximately $1.8 billion when acquired by a larger uranium producer in 2007.

These are the type of quality individuals you want to partner with.

Consider shares of Nano One (TSX-V: NNO & OTC: NNOMF) as your No. 1 play in the nanotechnology sector and the lithium battery niche!

Today, the process of controlling materials is inefficient, which is why Elon Musk is desperately looking for innovation, and this company has patented a technology that makes batteries last longer and much cheaper, and they are conducting pilots right now.

When the results start hitting the market, the stock will absolutely revalue overnight. 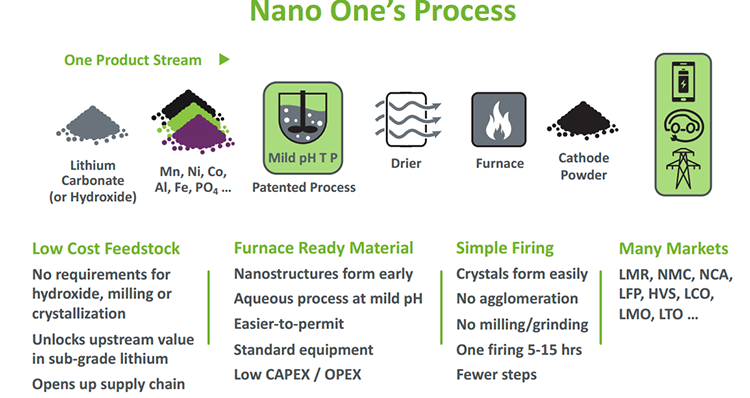 The process that Nano One Materials (TSX-V: NNO & OTC: NNOMF) developed is far superior to anything out there today, and we can be part of the early-stage investors.

Understand that the patents and the technology will allow this company to create robustly structured, longer lasting, faster charging, lighter, and cheaper batteries.

This is a $3B market that is expected to grow immensely in the coming 2 decades, and you can be at the forefront, owning shares of a company with disruptive technology that is on the verge of successfully completing pilots.

This is exactly why the company is receiving grants from the world’s most acclaimed organization and why it attracted NORAM Engineering as a scale-up partner.

I am ranking this as my highest conviction nanotechnology stock, and you should conduct your due diligence and consider partnering up with this solid group of entrepreneurs as they move forward at full throttle towards commercial marketing and selling of the technology.

This is the ground floor, and you can be part of the growth!

Consider Accumulating Shares of Nano One

Be an insider of the breakthrough Science Sector and stay well ahead of the game!

Get the Exclusive Report on how to profit from Nanotechnology now!