When people read books about our times 80-120 years from now (which will describe the conditions that led to the worst financial crash this world will have ever seen), readers will demand to understand how billions of people from all walks of life chose to believe in fiat currencies, government bonds, and paper derivatives over hard money.

I still don’t quite know how to capture it in words, but I believe that that ignorance of currency’s worth is a major contributor to this.

This newsletter was launched in order to help those who inquire about these matters, like you do, but the majority couldn’t care less.

The world is not comprised of many enlightened individuals like yourself. Most drift on for decades, never contemplating any subject of real importance – eat, shit, sleep, repeat. Unfortunately, most are mere sheep that must be herded. That is my conclusion after observing the masses from 6 continents, and I can only assume Antarctica won’t change my mind, when I travel there.

Not only do people choose government bonds over hard money, but they do so even when there are simple storage solutions for gold and silver.

$13.64 trillion, equal to a quarter of all sovereign and corporate bonds, currently generate negative yields. Is that not lunacy?

When the U.S. economy rolls over and begins to slow down, the rest of the world will feel the impact, not vice-versa; now that Germany and Europe are slowing, the U.S. is strong enough, domestically, to weather the rough waters. Judging by advanced Google Trends analysis, I can tell you our work concluded that people aren’t afraid of a slowdown at all. Terms like unemployment, which Americans research when they believe they’re next to get sacked, are low. They’re also not researching for TV shows, which means that they don’t have lots of spare time, as they would in a slowdown.

The amount of Google searches for coupons and discounts is also down substantially. In fact, Americans have been spending heavily on RVs and other pastime activities.

Most are putting 2008 behind them. They’re getting accustomed to their new reality: 2-3 low-paying jobs, some government assistance, a little debt, no assets, and few chances of exiting the cycle.

I implore you to NEVER stop dreaming, to NEVER quit in the search for prosperity, and to NEVER cease growing and developing personal skills that will result in your eventual breakthrough. Let the rest live unfulfilled lives – if that’s that aim – but keep right on envisioning a better future by acting in the present.

The economic lunacy will soon meet its maker. The dollar is on such shaky grounds that the White House had to send Trump’s economic advisor Larry Kudlow to tell CNBC that they’ve ruled out currency intervention in order to prop up the buck.

But JPMorgan doesn’t see it that way. The American middle class is gone; whoever controls the largest middle-class demographics controls the world, and that will be Asia in about 5-7 years. 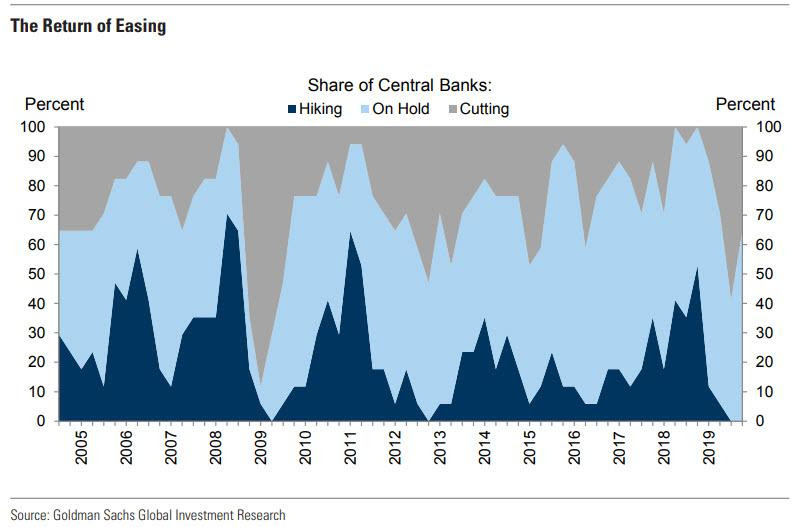 Now, for the first time since 2013, not a single central bank is hiking rates (as shown in the graph above), but the retail crowd is very confident that TrumpConomics works, no matter what. Gold’s rally has, therefore, been driven by institutions, not by your neighbor or your fellow Americans. In fact, in 2016, 9-times more physical gold was purchased than in 2019. Here’s the kicker: people are mostly selling back to their bullion dealers. 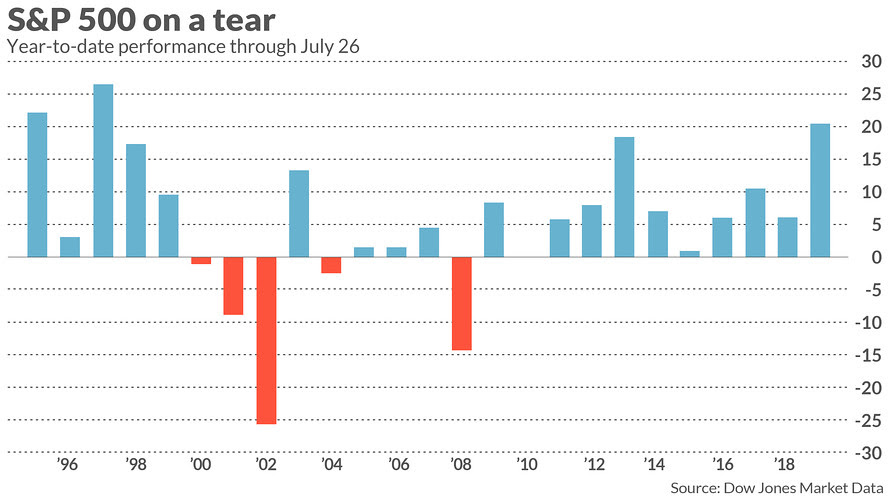 In the meantime, all this talk of stimulus has been sending our traditional portfolios soaring. Some of our positions, especially Aflac and Qualcomm, have been rising big.

I expect August to be a rough month for all sectors, so get some cash and be ready to capitalize!