The FED Will Stop at Nothing

Paul Volcker stopped inflation from becoming entrenched, but he is remembered for tightening into a recession. Jerome Powell has vowed not to go down like Volcker did.

According to academics and historians, Volcker gave America tough love, but the average person remembers him as the guy who lost Americans their jobs in 1981 and 1982.

The next few months will be critical, because we’ll know for a fact whether or not Powell has been able to orchestrate a soft landing. If so, he’ll be cherished as the best central banker ever.

He is tasked with cooling down the tightest labor market and the hottest inflation numbers in 41 years, at a time of war and conflict in Europe, a global healthcare crisis and the most divisive political landscape since the Civil War, with millions of people convinced the elections were stolen and not accepting Biden as their leader.

Clearly, Powell has a monumental feat to achieve.

The forward curve is already flashing red for recession with inversion of the curve: 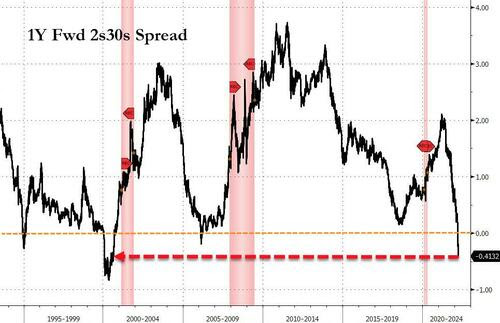 The economy is just strong and recovering, but the fear of a recession, due to mainly exploding housing prices and oil prices, are real and Wall Street isn’t dismissing those.

In fact, Wall Street is torn between the bulls and the bears, but the consensus is that the FED must prioritize inflation over slowing economic activity, because Powell has said that GDP growth is super-strong.

Reading between the lines, this means he is willing to contract the economy a bit, if the resulting inflation is contained.

Bond investors are pricing in a FED Funds Rate of 2.45%, which four years ago was rejected by the market, but now seems to be embraced: 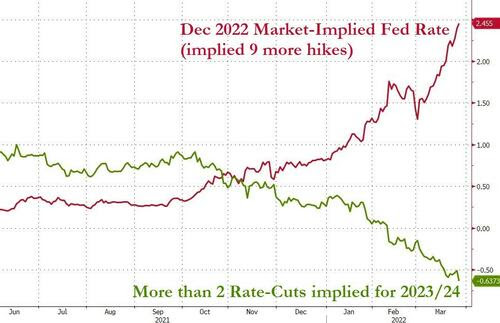 What’s starting to become apparent is that the markets believe that inflation is like a pressing issue for the moment, but that the long-term perspective has not materially changed.

Think about it like Uluru in Australia. It is a giant sandstone monolith in the heart of the Northern Territory’s “Red Centre.”

Around it, the desert is mostly flat, but Uluru is a two-hour climb that isn’t easy, because it rises up steeply.

Inflation is like the desert, mostly predictable and following a long-term 2% trend, but 2021 and 2022 are like Uluru, a huge monolith disturbing the plateau.

Once on the other side of it, the walk is easy again, but the climb is brutal and we must prepare.

Inflation expectations rose in March to a record high at 7.9%: 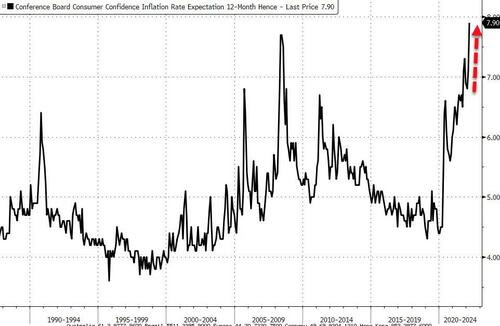 The market wants the FED to do what is required to climb this one-time monolith and get back to normal, but some believe that Uluru is more like Everest and that we’re bringing summer gear to a winter storm.

The American business world has been through way worse…