NOTCH ON THE BELT: Stocks Bite The Bullet!

All I’m hearing from investors is that they’re not sure if the recession will hit this year or the next. With regards to surveying investors about a bear market, the answers I get are anywhere from “the data is falsified and tampered with – we’re already in one. Don’t believe the government” to “We’re going to see a full reset. Expect the worst of times.”

Investors are definitely not exhibiting any excitement.

One thing I know is that we live in a low-returns world, in general.

With interest rates this low, post-inflation returns, no matter which asset class you’re looking at, are not high. If any asset can post unusually high yields or healthy price appreciation for an extended period of time, it is because it’s in a bubble. Case in point would be real estate in the U.S. in 2006, rare earth minerals in 2012, cryptocurrencies in 2017, or tech stocks in the Dot.Com era.

Because entire sectors can reach these bubble valuations, other sectors can dive deep into liquidation levels.

Due to these extremities in sentiment, we get conflicting data all the time.

I’ve seen countless “experts” raise the point that we’re heading into severe deflation for years. On the other hand, a similar number of “gurus” have rung the alarm on inflationary nightmare scenarios, due to the mountains of debt all over the place.

So many of these outlooks and forecasts have come and gone, unrealized, that investors have rightfully become cynical about falling in love with any economist or blogger, who claims to see the future.

Look at the data to draw conclusions about the PRESENT, instead of focusing your energy and time on building a map of the future.

For now, here’s what we know:

That’s not all, though.

A decrease in hiring preceded every recession since 1968, but today we actually see an increase.

Investors are also deeply concerned with credit growth and leverage. CEOs know that they are leveraged the same as we do. In 2011 and in 2016, the last time credit posed a problem, the markets tumbled, as they did in December. CEOs got the warning signs, internalized them, and acted accordingly. 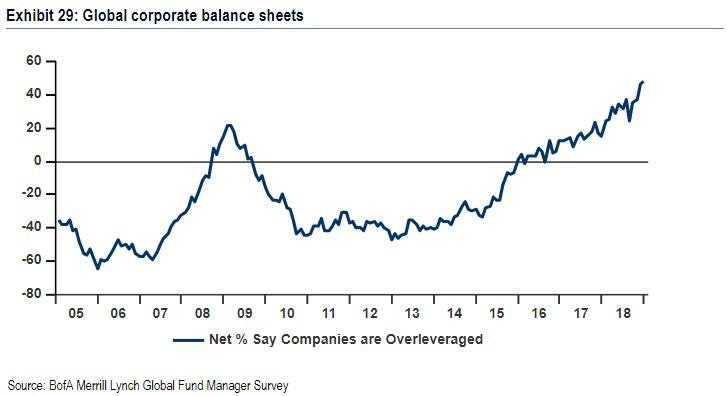 Balance sheets are certainly leveraged, according to investors, but stock prices have come down as well, pricing-in these concerns.

As I write this, I also check simple indicators of a slowdown, ones from the real world. Where I am, retail traffic at the malls is healthy; restaurants are full; hotels are enjoying high occupancy rates; people are spending.

Yes, there are many problems, but I can go back to any calendar year in this bull market and find an overwhelming amount of gloomy headlines as well. Reasons to be bearish are always there.

The bottom line is that, judging by data and by real measures, for now, a recession isn’t likely in the near-term.

It doesn’t mean we’re out of the woods when it comes to government debt or to personal loans, but it does mean that our theme from 2018 of a Blow-off Top to end this bull market, remains intact.

As you can see, the markets are mimicking ’07-’09 price action quite eerily, so in the weeks ahead, we’ll be able to tell if the party is over, or if this was merely a coffee break between DJ sets and the party people still have energy to take stocks even further.