Amazon is one of the largest companies in the world. It is phenomenally successful, yet for over 90% of its employees, this success means very little. They themselves don’t share in the equity of the company and haven’t seen their shares grow in price – since they have none. They’ve also not experienced a meaningful increase in wages, either.

Like Amazon, so many countries can be “successful” while the overwhelming majority of its citizens and taxpayers are not gaining in wealth, on an individual basis. This is the story of 2019 America; even the aggressive campaign implemented by the administration to show how unemployment rates are at record lows is BOGUS AND FAKE.

Technology and innovation are disrupting industries that employ a large number of Americans who are NOT TRAINED to quickly change career paths. The most popular job in 60% of the states that make up America – truck-driving – will be replaced by driverless vehicles, for example.

The capitalistic machine, driven by the law of creating cheaper, quicker and better products and services, in exchange for a profit will not stop to give truckers a chance to prepare before these new trucks hit the road – they should be preparing now. The challenge with the millions of jobs that are at stake due to automation is that the question of collective responsibility towards this displaced demographic is becoming a really controversial one. Should the federal government assume the role of nanny and take care of millions that are victims of progress, or should the market system find new jobs for them?

One of the challenges that Warren Buffett raises on this subject is that there are “nice people, who don’t fit the market system.” His view is that there are people who are not able to excel in this type of world, and we should do what we can to assist them through life – via our taxation system.

This is a major philosophical debate – what Buffett is suggesting is that some people are not capable enough to succeed and probably never will be.

Is there something special in the hearts and minds of certain people that make them better than others at providing value to the marketplace? That’s a tough pill to swallow and it opens the door to many financial debates regarding the extent and measure to which a government needs to go to help its citizenry.

The problem is that we don’t even know how many people truly need assistance. The official unemployment numbers are DELIRIOUS about the actual number of people who have given up on looking for work. Because the BLS (Bureau of Labor Statistics) only calculates the individuals who have looked for work in the past month, there is a shadow unemployment figure that is scary and even more distressed, which includes those who haven’t even APPLIED or have looked for work for months on end. The official government number also calculates people with 2 or 3 jobs as 3 individuals, and considers the large number of part-time workers as one and the same with full-time workers.

Here’s the kicker: if someone has become so frustrated that he just sits at home not even looking for work, the government stops counting them altogether, though they’re probably teetering on the edge of poverty or already there.

Adding these individuals DOUBLES the official 3.6% unemployment rate that Washington is touting. The bottom line is the OVERALL labor participation rate – take a look:

Therefore, putting these elements together with the chart above, gives us the true picture of the U.S. economy, and it means that around 10% of the people are unemployed, 25% are earning minimum wage or close to it, and 4 OUT OF 5 live paycheck-to-paycheck.

The country’s stock market is booming, and the borrowing costs are historically as low as they’ve been in the past 6,000 years. The government’s deficit is enormous and will require monetization or a substantial write-off and still so many are struggling, plain and simple.

China has 5-times the population of the U.S., and they are even more rigid with unemployment and societal fractures. Violent revolts are common and this will continue to dictate the way the government has to wiggle between long-term and short-term solutions to appease the populous. They MUST keep people working.

If the trade war really becomes that – a war – many millions of people who rely on the political system and the market system to function in a stable manner, will SUFFER.

I call it the “Nuclear Option” because it will have the same impact of dropping an actual bomb. 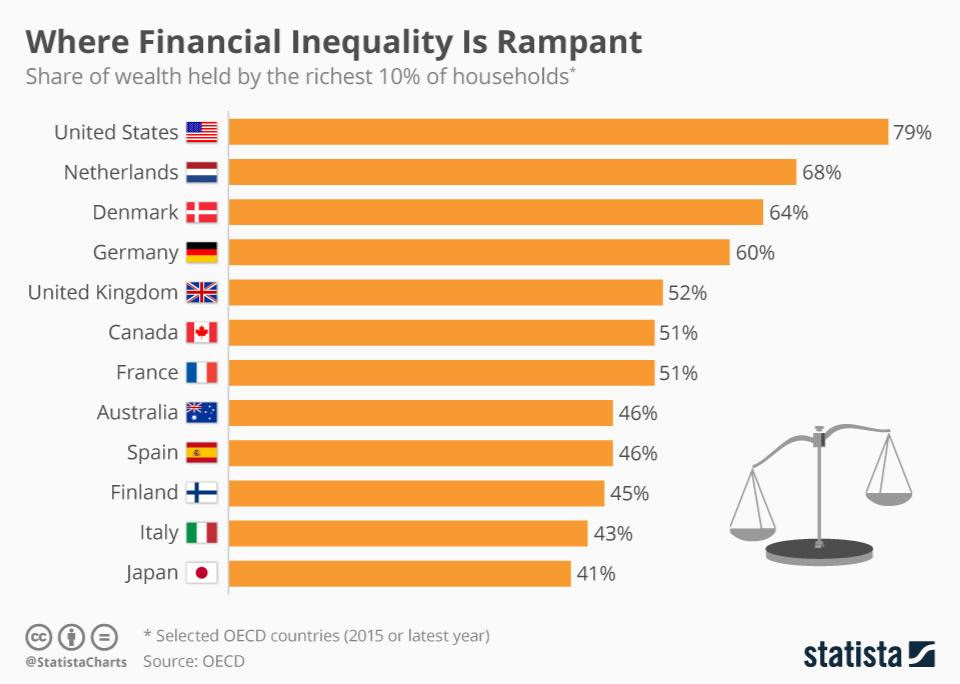 The United States has sacrificed its blue-collar workers in exchange for corporate profits.

This has enriched its business owners to a level that threatens the willingness of millions of people to believe in the “American Dream.”

Americans are bound by their shared beliefs, but even these are coming under pressure now.

The coming elections will draw a clear line in society between those who want change NOW regardless of the cost, and those who want to preserve the foundations that built America.

The recession and the bear market will only send this strife into 6th gear. I expect huge, huge problems and a major cyclical shift in the markets.