President Trump is rising up the ladder of popularity, showing both supporters and detractors that no matter how you relate to his demeanor and personality, stuff gets done under his watch. 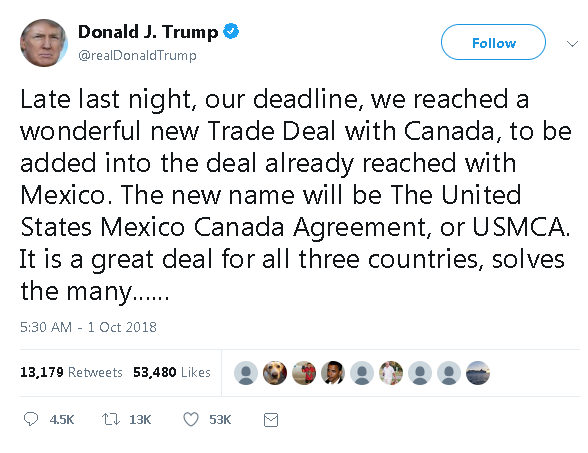 This is precisely what I predicted a month ago when we published our thesis regarding President Trump’s chessboard match with the public, the media, and the international community.

In that letter, we showed you that it is in the administration’s favor to pile on the problems before mid-term elections, thus making it seem like there are more loose ends than accomplishments, but then, one by one, announce the resolution to many of the rain clouds dumping constantly over our heads for a long time, releasing the tension and highlighting Trump’s approach is valid.

Donald is proving to the American public that he has many umbrellas to shelter the public that can send stocks into euphoria. In fact, at this point, I expect them to.

In light of this, we’re reiterating that we remain cautiously bullish, which means that we capitalize on any huge position that is trading at expensive valuations, taking profits now, thus raising cash levels, and selling any weak positions as well, cutting them loose.

In the previous update, I revealed two investments I’ve made:

We’re already up 8.5%, including dividends.

The upside for this company comes from the fact that it will continue to grow at a projected 8.9% rate, along with paying a 3.5% dividend yield, but its biggest catalyst for an immediate rally is its cheap P/E ratio.

Taking that into consideration, I can see the total return clocking in at nearly 20% annually for the coming 3-4 years. After two of my previous healthcare stock profiles performed extremely well for us, Walgreens and AbbVie, I expect this third to do just as well.

This is a very defensive position, designed to protect capital in a market correction, not to explode in price.

Making 9% in two months on a company as safe as KMB is solid. Annualized, it represents a 54% return, which will never happen, of course. So I’ll be selling half of the position, banking some of these gains and deploying them in two new positions, which I’ll highlight below.

In addition to selling half of the Kimberly Clark position for a 9%, 73-day gain, I’m taking profits in two other stocks that have done very well thanks to the overall market environment.

It’s overvalued and gives us the opportunity to take advantage of other buyers’ positive emotional sentiment towards this business, which is too good to pass up on. Hype, displayed by others, is always good for the calm, disciplined investor.

The 2008 crisis sent several of the best businesses in the world into crazy-low valuations. Cintas was one of them. This company rarely becomes cheap, so I’m thrilled it was on my watch list in 2013, when its potential return matrix showed huge upside, and I took action.

At the time, investors were worried about the fiscal cliff and other noise. Don’t let short-term news influence a long-term decision.

The stock has doubled, up 97% since the “end of retail” fears were proven to be overblown. Of course, V.F. Corp. grew online sales as well, adapting to increased competition. Consumers can now find Timberland, The North Face,Lee, Wrangler, and its other valuable brands on the Web.

Lastly, here’s where my money has gone these past two months, my top-ranked picks for long-term wealth:

AMAT is a leader in the semiconductor industry, which will continue delivering massive gains to shareholders. Now, I count myself as one of them.

This is NOT a recession-proof business, which is the reason many are bearish on the stock. As you know, we likely won’t see a recession for another 12-18 months, so with its extremely conservative P/E ratio, I think there is fresh juice to squeeze from it, and I intend to.

As the recession looms, I’ll readjust my stance.

As I first starting studying this company in 2014, I immediately realized that its competitive advantage is huge.

Beyond the fact that it is already a $242B operation, it is in the midst of growing the business further. Its dividend yield is one of the highest for any safe stock in the world, at 5.93%. Combined with a cheap valuation, which could rise by another 9% per year for the foreseeable future, and its aggressive growth guidance of 6.2%, we’re looking at a 21.1% potential.

Our next update is due at the end of November. We’re carefully closing out intensive due diligence on what could become the biggest cannabis play of 2018.