PUTIN’S DO OR DIE WEEK BEGINS!

The Pressure is On

When he was just a teenager, his gift started to show. The little boy became obsessed and was already going around the neighborhood, looking to learn more and more. In his hometown of Chicago, music wasn’t such a big deal, but still he found that his one-of-a-kind perception of beats and lyrics was above and beyond those of others.

The world turned into a giant library and he drew inspiration from anything that he experienced.

Young Kanye West was an up-and-coming music producer, coveted by Rock-A-Fella records, founded by Jay-Z; and Kanye, whom everyone looked at as a promising beat-composer, was gaining success.

To everyone else, he was an unknown producer, a genius, but a person who otherwise remained backstage, while the artist received the admiration and the fans. But to his close friend, who was filming and documenting his journey, Kanye was a rapper who wasn’t recognized yet, but would soon be a superstar on the global stage.

No one perceived Kanye West, a producer, as a magnetic performer, but he certainly knew that that was his destiny.

After playing songs for Damon Dash, the co-founder of Rock-A-Fella Records, he still did not get his break, even though other artists were beginning to notice and compliment Kanye’s vocal abilities.

When he finally got the attention of Jay-Z and Dame Dash and was signed as an artist, he suffered a horrific car accident, which nearly ended his life. It left him with severe facial injuries, especially to his jaw, which prevented him from rapping and delayed his debut album.

He was forced to improvise and self-fund his debut song “Through the Wire,” and the rest is history; his magnetic performances brought him to the top of hip-hop and won him many Grammy awards, but to win the attention he yearned from Jay-Z and his record label, he went behind their backs and created his own music video.

Sometimes, when you feel pressured and disregarded, you do extreme things to make sure you are noticed.

Russia is a country that can’t afford to be marginalized or it will make its presence felt.

For centuries, the Russians were an empire. Putin believes that NATO is an existential threat and that his verbal warnings, which he has been expressing for years about Ukraine’s “westernization,” have gone largely unheard.

Like the Egyptians in 1973, he decided that to be taken seriously, he must take military action. Some Americans commend him, while others condemn his actions, which are costing lives and bringing fear to an entire nation.

Whether you agree with his strategy or reject it, this is the week that he doubles down and conquers Kyiv, forcing the Ukrainians to kiss his hand—or he must save face, capitulate and realize the international community will continue to punish him.

This onslaught has not changed the market’s mind about rate hikes, which it still deems as appropriate and necessary.

On March 15th, it will probably be 25bps, but June’s meeting might lead to a 50bps hike. By the end of 2022, the market still maintains that the six rate hikes will get us to 1.5% on the Fed Funds Rate, nearly where it was pre-pandemic.

What we have seen in the past couple of trading sessions (Thursday and Friday) is that along with the positivity from the CDC, which has relaxed mask mandates pretty much across the board, the global investment community is also not worried that Putin will lose control of his emotions and drag the war into NATO countries.

That realization has caused the biggest reversal from red to green since the March 2020 days, and is one of the widest one-day swings in stock market history: 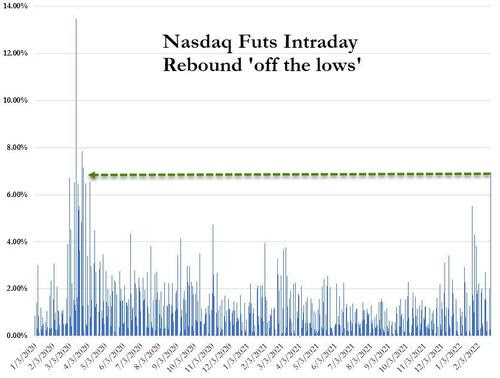 If the situation doesn’t escalate to a terrible miscalculated attack this week, diplomatic negotiations can actually prove to be extremely productive in setting ground rules for the region.

The markets are entirely oversold and I have been buying heavily.

Time will tell if last week was the bottom for the year.