RIGHT To The JAW: Trump vs. Powell!

Stocks had made nearly a perfect V-shaped bounce, back to the October 3rd highs, when, last Friday, the Federal Reserve again tamed the winds of the bull market.

It looks like the central bank is deeply concerned with surprise inflation, which is the type of spike in prices that happens when consumers spend their increase in wages faster than predicted.

Washington will need the Federal Reserve soon. It might also need Chinese support. There’s no getting away from the fact that the federal deficit is financed, at a large extent, by foreign creditors and central banks, not by free-market participants, who have better options for their funds. 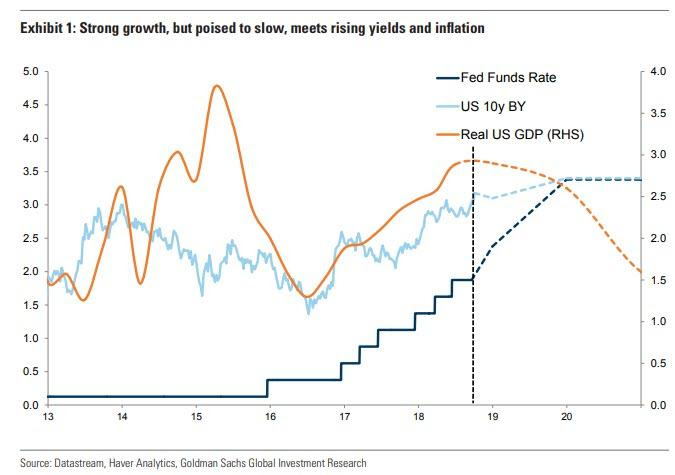 Hiking interest rates makes one thing certain – whoever is not ready to face a contraction will be exposed and hurt.

We’ve seen, in the past few years, a bull market that rewards earnings growth. Facebook, Google, Apple, Netflix, and Amazon, the FAANG stocks, were bid-up by investors, no matter the price, since the emphasis was on growth alone.

With a contracting economy, the weight will tilt towards value.

As displayed in the chart above, soon the pace at which the economy grows will be lower than the cost of money itself.

Put differently, if you can lend funds to a government, whose GDP growth is smaller than the yield it promises to pay back, you are speculating that either growth will shrink or that the government will print currency.

Both of these options are not favorable for the lender, but they are even worse for the borrower. For an economy, the size of the U.S., which generates 25% of the planet’s GDP, to function in an environment of high-interest rates, coupled with slow growth, can only mean one thing – stagflation.

This is the reason I keep going back to the collision between President Trump and Chairman Powell. If the government can’t sell bonds at the auctions, the FED will resort to QE again. If I was Trump, my objective would be to build bridges, not to antagonize anyone.

It is nearly guaranteed that a dollar crisis will occur within the next five years, since the next slowdown will bring to the surface societal issues, income inequality outrage, and entitlement funding.

November marks a great time to go over your portfolio, one by one, weeding out growth stocks, which were bought, due to their future estimates of increased revenue and fatter earnings, not because of their attractive prices.

In the world we live in today, value will take precedence over future earnings power.

Investors will look for the cheapest, without a doubt, not the fastest growing.

As I see it, they will migrate to healthcare first. You can already see my personal favorite, Walgreens (WBA), which I bought for $65.11 a share, becoming a market leader in performance.

Since early June, when Portfolio Wealth Global alerted that WBA was one of the best opportunities in the world, shares are already up 31%. I’m not buying at these prices any longer, but I do expect Cardinal Health (CAH), my more speculative healthcare position, which is trading right at the upper limit of my maximum buy-up price of $55, to make fresh, all-time highs.

Then, after the all-traditional sectors have become somewhat expensive, we will see a stampede into COMMODITIES.

By far, no matter how you look at it, this is the most depressed industry, with bargain prices, offering enormous upside.

We’re currently assembling a Watch List of 5 companies, which we will publish in late December 2018. It will encompass the must-own stocks for the coming commodities bull market!