RISK AT EXTREME LEVELS: MARKETS CAN BREAK DOWN, COMPLETELY!

My gut is telling me that billionaires are getting sick and tired of stocks, just about now. We already know that Buffett and Munger, the duo who have picked stocks better than any other person alive in the past 50 years, haven’t found a single good deal for over two years.

Next, we know that David Tepper, the BEST investor of the past 2 decades, is returning money to shareholders and considering turning his hedge fund into a family office. We know that Ray Dalio is stressing the importance of diversification in the years ahead, away from stocks and that he is buying more gold. Lastly, we know that Jeremy Grantham, who has been the most consistent market forecasting hedge fund manager ever is projecting 2%-4% returns in the coming decade in U.S. equities.

These returns (2%-4%) are before discounting inflation. In other words, this billionaire is telling you that dividends will be the primary source of returns in the years ahead, since price appreciation will be weak.

What is cheap, then, in this world of investments? 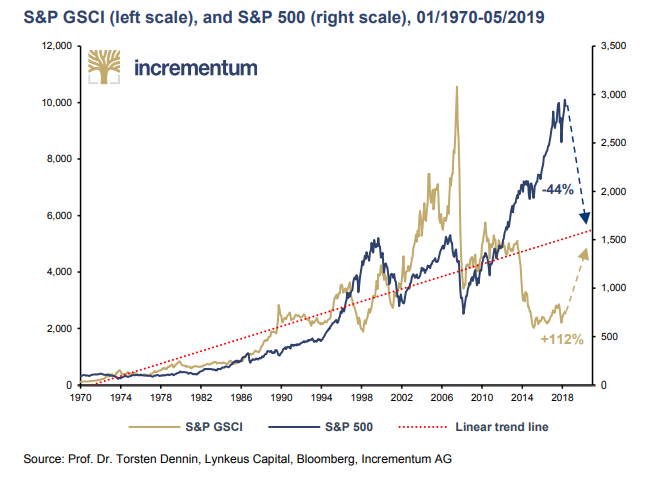 Historically, stocks will need to give up 44% of their current price, on average, while commodities more than double (112%), in order to return to the trend line since we went off the gold standard in 1971.

Interest rates are NEVER, EVER going back to the nearly 20% era of Paul Volcker in early 1980, which restored faith in the dollar and gave America breathing room for over 25 years – until its credit system, its theatre of projecting strength (militaristically, while crumbling economically) all came down in 2008. No FED chairmain will raise rates that much because it’s impossible.

In order to restore faith in the U.S. dollar this time around, something outrageous would need to happen. Heck, the USD has been in a bull market vs. other currencies for years; investors call it the least ugly duckling and they’re right, for the most part. But that doesn’t mean they want to keep hoarding more and more of it.

If you’re starving and all there is to eat is junk food, you’ll eat, but you would jump ship at the first chance of getting a more nutritious option into your body. 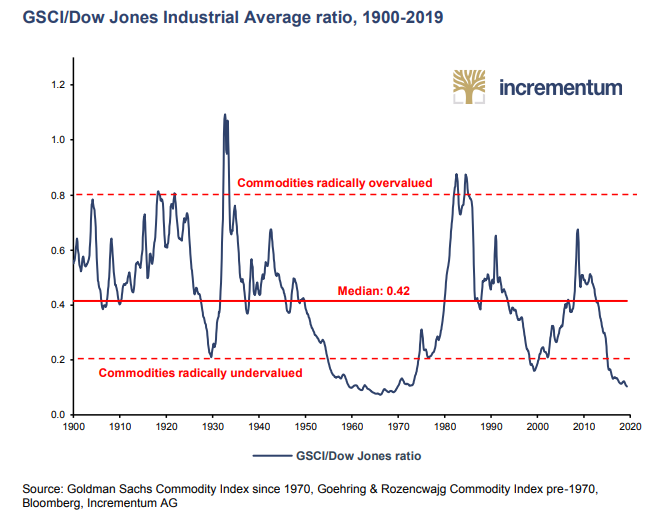 Take a look at the 1955 to 1971 era very closely. For 16 long and gruesome years, commodities spent time at the “radically undervalued” level.

Commodities investors, who simply HELD throughout this period, accumulating shares in the companies managed by the best businessman, saw a stratospheric rise in their investments from 1971 to 1980.

The point here is that commodities can stay extremely cheap for long periods, so it’s a mistake to own investments strictly in this sector compared with traditional investments. But the other point is that it is also a grave mistake NOT to own any gold stocks, either.

This time around, the problem is not only that stocks are overvalued and that printing currency is a virus, but also that the problem is global, not just local. The entire world is indebted.

The global scale of this problem is behind the demand for Bitcoin, which is proving to be an extremely useful mechanism of shielding purchasing power in inflation-stricken regions.

In other words, instead of American Express enjoying the loyalty of the customer, who is swiping his card at Starbucks, while AMEX is clipping a coupon, Starbucks itself wants to own the payment system and retain your data and loyalty. To do that and cut out the middle-man, they are building internal databases and launching independent coins pegged to the dollar, for example (Stale Coins).

What an incredible time to be an investor. We are on the cusp of a commodities super-rally and a digital currency revolution, taking the power away from corrupt governments and giving it to the free market, where it should be.