For several months, we’ve been hearing that China is weak, that it must do a deal, that it’s under pressure, and that cooler heads will prevail, but now the battle could become personal for Trump. If anything could curtail his chances of re-election, it is his fan base giving him the cold shoulder, if they start to believe he is derailing in judgement.

Up until now, whether you like the Trump philosophy on life and his erratic behavior, or are appalled by his demeanor, his main attractive quality was that the U.S. economy and the stock market were both on fire, which makes everyone happier.

This is being put into question, and if Trump isn’t careful, he will become his own worst enemy – not Jerome Powell of the Federal Reserve or President Xi of China, like his twitter account says. 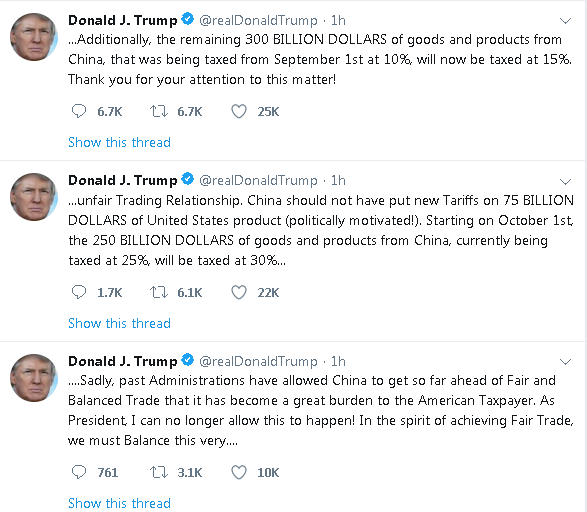 I don’t care what you call it – war, negotiation, or conflict, but it most certainly is a test for the global economy, a way to measure how resourceful, imaginative, and flexible businesses, corporations, and institutions are to abrupt changes that seemingly arise out of nowhere.

In the business world, the problems aren’t created by change itself, but by the SPEED of the shifts. 30 years ago there was no internet, and now we can’t live without it, yet we’ve adjusted, since the process was natural. Trump and Xi might be taking this too far.

In the 20th century, we’ve seen disruption like in no other century the human race has ever known. Most have been able to adapt, but when the leaders of companies and heads of state, people that have remarkable skills and experience, can’t make sense of the world, you’re in a real bind.

We don’t want to see this becoming a battle of masculine testosterone. President’s Xi move will hurt America and that’s actually a catalyst for formulating a deal. What no president can taunt is that the trade deal is the greatest ever, because that would mean that the other country has lost. The war must hurt both economies, so that the solution is also good for both parties.

This escalation on Friday will speed up the process of finding common ground, but even a trade deal won’t make investors trust in the Chinese government or its pledge to stop intervening in the Yuan, their national currency. 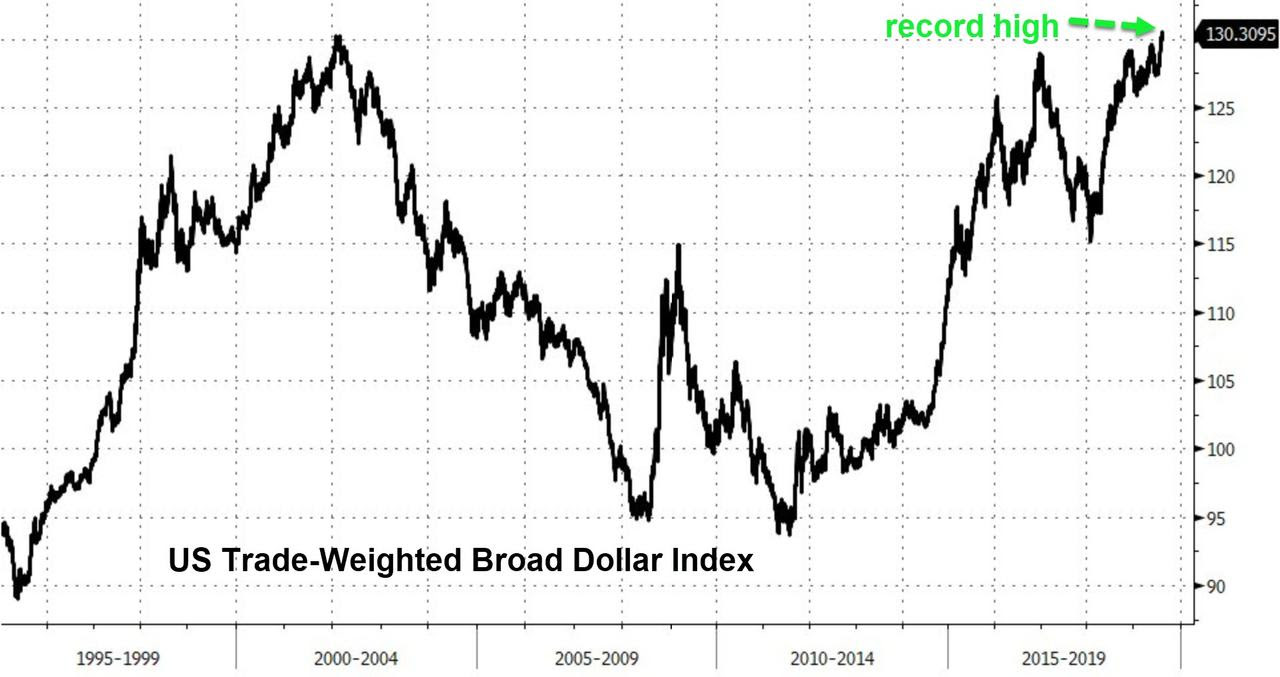 Notice that this chart is predicting a major move for gold. While national currencies can’t become too strong, or you introduce a situation where a country’s trade balance (imports and exports) goes out of whack, gold only reacts to real-world fundamentals, not to any national concerns and knows no boundaries to its price.

In the years leading up to the Dot.Com bubble, the dollar was in a bull market, which ended with the gold bottom at $250/ounce. For eleven years after that, its price rose, reaching $1,925/ounce, but then a dollar bull market began. In 2015, as the dollar made a parabolic move higher against other fiat currencies, gold started heading north as well.

Notice that both the U.S. dollar and gold are at all-time highs, compared with other currencies. They’re both enjoying bull markets, but the dollar is the one that can’t go much further in one direction because it will cause (1) Europe, (2) emerging markets, (3) U.S. exporters, and (4) commodities to implode.

The FED must intervene and I expect it will be in September. 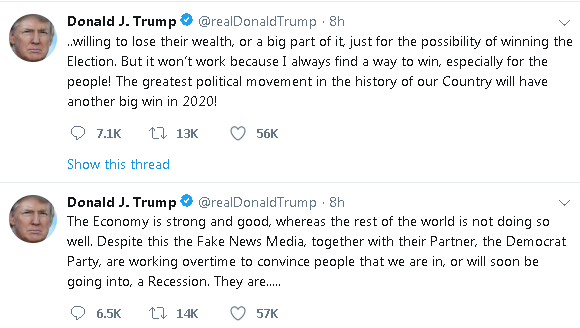 These non-stop tweets from Trump on Friday are known as going ALL-IN!

The best stimulus to any economy is also the cheapest one and it’s called CERTAINTY.

We already know that we’re not in for a smooth ride, but the world isn’t prepared for the level of stress that an escalation from here could bring with it.

We’re really entering a new era in the global economy, where countries like the USA want to strengthen their independence, especially now that their energy needs can be met by domestic natural gas and oil supplies.

Outsourcing to cheap labor countries will persist, but it will transition to other regions – mostly to Africa, whose population is growing tremendously. China is evolving and this is going to be a unique year ahead.

We literally have two leaders that are stretching the limits and playing chicken with each other. Like any round of Russian roulette, there will be victims in this game and one way to distance yourself from it is NOT TO PLAY at all.

If national currencies are the gun and tariffs are the bullets, stock markets and bond markets are the temple on the head.

Gold is the best way to de-risk and it will continue to make a huge rally. 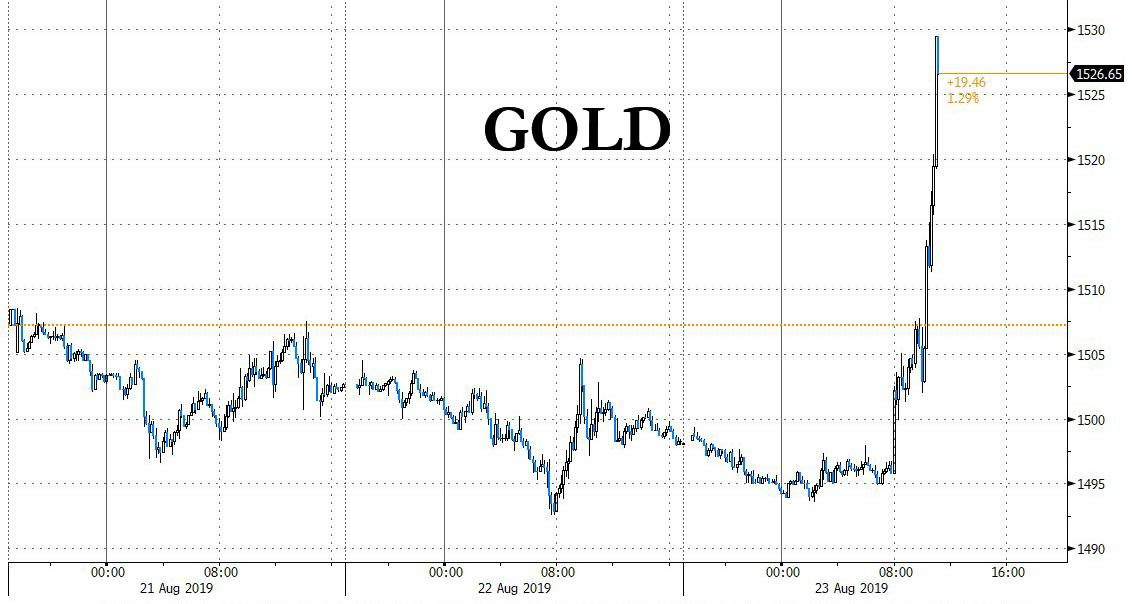