Interest Rates Have Wiped Out Buyers

In April 2010, I and a friend of mine partnered up to purchase real estate in Arizona. In June 2022, nearly 12 years later, we put these units under contract and sold them for 4x what we had paid for them, or a 300% gain.

By using leverage, our actual gain was north of 300%. My friend, who was the one that suggested we sell the units since he feared a housing winter, is texting me once every few weeks bragging about his timing.

I can’t argue with that because we literally sold at the peak.

The transaction volume has DRIED UP, and the price will follow.

In the U.S., more than 80% of deals are made for existing homes.

Newly built homes, which only constitute about 1 in 6 sales, have also collapsed.

What’s worse is that the supply is still rising. It now sits above the healthy average of a 4-month inventory; it’s currently just over 8.5 months.

What this tells us is that the difference or the gap between the inventory of existing and new home sales is the widest in history, and that’s not all…

For the first time since the mid-1990s, when the last real estate purchase slump ended, the supply of money (M2) has contracted!

On top of that, when looking at the arbitrage between mortgage rates and long-dated Treasuries, the spread is nearing 3.00%, the highest on record.

Even as all of this is happening, two of the real estate funds I’ve invested in in the past two years are both telling me that they’re throwing large annual parties for the client base and are very thankful for the loyalty of their investors.

Such good news is actually bad news since it tells me we’re not done with zeroing out the excesses. 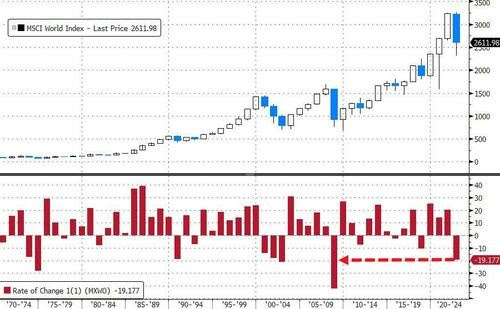 The important takeaway from this is that after 1974, the bull market in U.S. equities did not return for seven more years. At the same time, commodities were raging higher!

I tell you this because I see gold reaching Wall Street again, with several analysts extremely bullish on it for 2023, and the price action is very encouraging to start the year.

While global stocks just had their 2nd-worst year since 1974, the bond/stock combo (60/40 portfolio), the most common retirement allocation in the world, just suffered its most devastating performance since 1932: 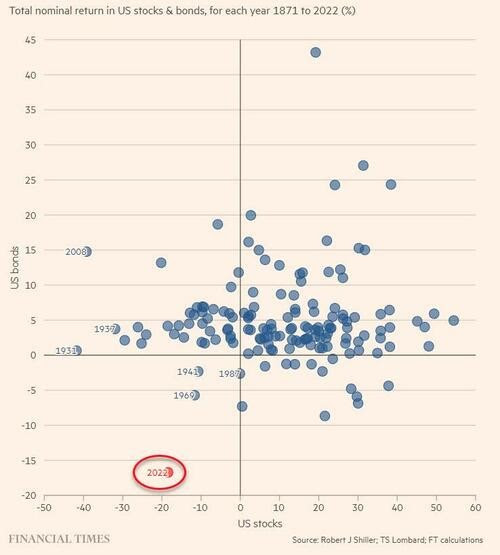 I think that real estate, along with the job market, needs to see more pain before the FED sees enough real-world data to conclude that inflation is not a major threat.

I don’t believe that interest rates will be cut in 2023.

This is a year of zero growth, and that’s great for precious metals as a hedge.