People like yourself, who READ information that isn’t pure propaganda, are the few enlightened ones. Most people read to be amused and forget their problems, but they know nothing of real substance.

Case in point is this new study that was just released: 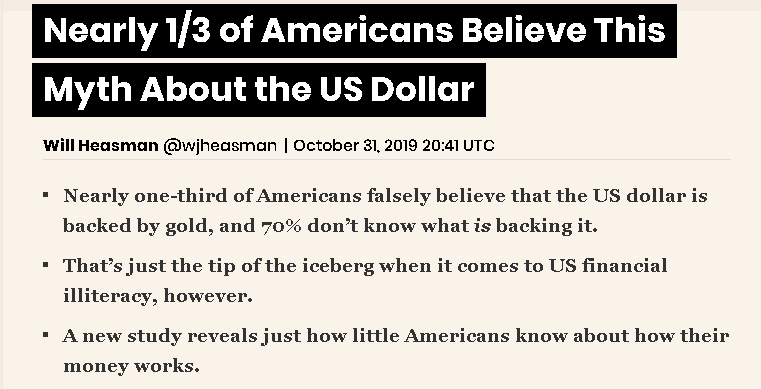 48 years ago, on national television, a sitting president announced the official decoupling of gold from the currency. 29% of responders still believe that dollars are as good as gold.

They probably didn’t get the memo that $35 of stuff in 1971 now costs $1,510; what a crazy devaluation in the only eternal benchmark that matters: precious metals.

30% of Americans do know that the U.S. government is the only thing backing the dollar, which is actually encouraging, but what a sobering thought to ponder that the institution that owes $23T to creditors is the one that is in charge of keeping the dollar on a leash.

In the big picture, though, there are many more people around the world today who KNOW the truth, but knowing it and actually doing something about it are worlds apart.

That’s because only 1 out of 7 people in the western world climb up the food chain and become radically richer than their parents were.

If the FED is correct concerning its thesis that what it’s done is a mid-cycle adjustment, then we have a BIG year ahead. But if these cuts are right next door to a recession, expect flat markets, going forward.

Personally, my analysis is that the markets have plenty of room to grow, not only because the economy is still expanding, but also because of the relief rally that will follow the trade deal. Additionally, thanks to zero and negative rates, bankruptcies have been kept to a bare minimum.

The flipside to this is that there’s $17T invested in bonds that will bring negative results to its owners.

I can also say that about other expensive assets, which would crash down by tens of percent at the first sign of higher rates, as we saw in December of 2018.

The point is that this entire structure is holding up ONLY BECAUSE interest rates are this low, but the number of lousy investments that are out there will kill growth 5-10 years from now.