The POPE Owns LOTS OF GOLD!

In search of the world’s vast stores of gold, most look to Fort Knox, Swiss banks or central banks and governments around the world. Yet, there’s a powerful global entity with incalculable reserves of wealth – including massive quantities of gold bullion – but it’s shrouded in mystery and largely unreported in the mainstream media.

The Vatican is the central authority of the Catholic Church. The Vatican operates as a sovereign city-state with its own economy but with less transparency than major world governments since it has published very little over the centuries about its finances and investments.

The Vatican is a financial powerhouse because it encompasses 110 acres with a population of under 1,000 people and has a far-reaching impact on the financial world with its investments, which run the gamut from banking and real estate to private enterprises.

The governing body of the Vatican is called the Holy See, and it generates income through donations.

Historically, the Holy See invested mainly in a portfolio of Italy-focused stocks and bonds. Eventually, however, the Holy See diversified into western European currencies and bonds – and even the New York Stock Exchange – as well as investments in real estate around the world, particularly in land and churches.

The real crux of the Catholic Church’s wealth-building strategy, though, is the Vatican Bank. This is a private bank located in Vatican City and founded by Pope Pius XII in 1942, and it’s been at the center of scandal and controversy for decades. Accusations of mismanagement, money laundering, and fraud have beset the Vatican Bank in recent years.

He further acknowledged that this would contribute to a projected 30% reduction in revenue for the Vatican. “The liquidity of the fund is being depleted and with the current crisis, it is very likely that in 2022 we will have to resort to some extent to the assets of Apsa,” the Reverend added, referring to the Vatican’s central bank.

While traditional income sources aren’t as robust as they once were for the Catholic Church, its central bank is believed to have vast, hidden reserves, including gold bullion – so much so that the Vatican is claimed to be the greatest financial power on Earth.

The Vatican’s hoard of solid gold totals several billion dollars in value. It’s been stated that a large bulk of this gold is stored as gold ingots with the U.S. Federal Reserve Bank. Meanwhile, banks in England and Switzerland hold the rest of their gold bullion.

This increasing orientation toward precious metals, as opposed to more traditional income sources, has taken place in the Catholic Church independently of each successive pope. Allegedly, the Vatican’s recent financial deals in the U.S. alone were so big that it would often buy gold in lots of a million or more dollars at a time.

This doesn’t even count the Catholic Church’s unreported gold holdings, which are assuredly extensive and located around the world. Without a doubt, the church is in possession of metric tons of gold in liturgical objects and art – not to mention that the Vatican is filled with art and historically significant objects that contain gold leaf, gold inlay, and other priceless treasures – that are largely unreported but certainly worth many millions of dollars.

The real treasure trove, however, is the physical gold that the Vatican keeps hidden in vaults in order to secure its various investments and business interests.

Due to the aforementioned scandals and fraud allegations, the Catholic Church’s current Pope claims to want to reform the Vatican’s finances in order to make them more transparent to the public. Yet, skeptical minds have every reason to doubt this reform effort since information about the Vatican’s full gold holdings remains frustratingly elusive.

There are obvious reasons for this lack of transparency.

The Pope, as the visible ruler of this immense accumulation of wealth, could be the richest individual on the planet. It’s no accident, then, that no one can fully assess how much the Pope is worth in terms of billions of dollars.

Among others, the Vatican has financial connections to the Rothschilds of Britain, France, and America, the Hambros Bank, and the Credit Suisse in London and Zurich.

It’s also been discovered that in the United States, the Vatican has large investments with the Morgan Bank and Chase-Manhattan Bank (which are now known as JPMorgan-Chase), the First National Bank of New York, the Bankers Trust Company, and others – the list goes on and on.

The main depository for the Vatican’s gold, however, is known to be with none other than the U.S. Federal Reserve, the nation’s central bank. Medals and precious coins are kept in hidden vaults there at the behest of the Catholic Church.

Since the Federal Reserve itself isn’t known to be particularly transparent in its financial dealings, it would be impossible to calculate the Vatican’s gold holdings there. The value of that gold might be in the hundreds of billions.

One source claimed that $34 quintillion in gold was seized from the Vatican and will be given to people globally. However, Friar Roger Landry, an attaché to the Permanent Observer Mission of the Holy See to the United Nations, categorically denied this claim, saying, “A quintillion is a billion billions and there’s not even that much gold, not to mention money, in the world.”

Unless the Pope makes good on his promise to bring transparency to the Catholic Church’s finances, the Vatican will be free to collude with the Federal Reserve, the Rothschilds, and other power players to build its wealth without limit or declaration.

Don’t count on that promise coming true anytime in the near future.

As long as the Vatican has deep connections and vast quantities of gold, the Catholic Church’s secrets will remain well hidden from the public.

The markets are adjusting to a growth-scare and a recession, both of which are extremely bullish for gold, so much so that when this happened last, gold stocks were the best-performing asset class in the world for SEVEN STRAIGHT years.

END_OF_DOCUMENT_TOKEN_TO_BE_REPLACED 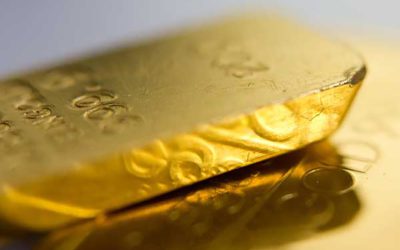 GOLD in BEAR-SPIRAL: NEXT for PRECIOUS METALS!

The world’s economy is slowing down, and we can see that everywhere, but when I see a semi-truck racing down the highway swinging from side to side ready to hit other cars on the road and wreak havoc, slowing down is exactly what I want it to do, but slam the brakes too hard and the change in center of gravity can cause loss of control, which is just as bad as making a turn at ungodly speeds.