THE TIME HAS COME: Gold Holds The Line!

We’ve been here before. This time last year, gold was making its move. By the end of March, the intraday price hit $1,362; but the FED kept raising rates, so eventually bidders moved to cash, as short-term bonds yielded positive returns, post-inflation.

Presently, the 3-month Treasury bond is yielding 2.44%, which is as attractive as it’s been in the past decade.

This is the reason that people from around the world are choosing the U.S. dollar over every other fiat currency. After a decade, the Federal Reserve has made cash a viable alternative, compared with other asset classes. With over $10 trillion in negative yielding bonds, Washington is suckering investors in with juicy interest rates, comparatively.

As I’ve said before, 1969 was the last time that investors trusted the USD as much as they do at the moment. Only 2 years after that, Richard Nixon put in motion the greatest currency devaluation scheme in world history. 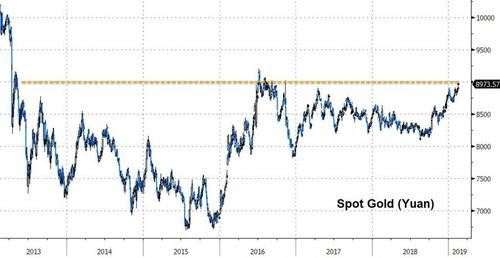 It’s not just U.S.-based investors that understand that fiat currencies are about to hit a brick wall – the Chinese are well-aware that central banks are, by and large, SCREWED, as the chart above shows.

In terms of Yuan, gold is, for the 3rd time in three years, attempting to smash through resistance and break above its 2013 range. Jeff Gundlach (a.k.a. the “Bond God”) is certain, on a technical analysis level, that gold is headed towards $2,400. He’s not the only one. Ray Dalio, who said about Warren Buffett’s negative stance on gold that “he is making a terrible mistake,” is betting heavily on higher gold prices.

In the geopolitical sense, the biggest worldwide driver of gold prices is the rise of populism. But for me, the reason to own it is because of the following facts: (A) the Federal Reserve has FINISHED tightening. When it cuts rates next, the price can potentially increase by $50 in a single session. That’s not all: on top of this potential rate cut, there’s (B) a dollar printing rescue operation about to begin. Washington needs to raise $1.1-$1.3 trillion annually for the next 10 years. That’s the yearly deficit amount, after accounting for all incoming tax revenue. In total, over $12 trillion needs to be issued in new bonds.

Foreign countries are not exactly standing in line to help the treasury department meet these obligations. The U.S. will have to rely on currency printing.

This nation is fragmented. People from one part of the country have no idea what’s happening for other demographics. It’s a mess. The worst part of it is that the U.S. is, judging by its own standards, booming. According to President Trump, it’s the hottest economy on the planet.

Problem is, the U.S. economy and the American stock market indices are not reflecting reality properly. While stocks are currently on an absolute tear, the average worker is fighting to see his pay raised to $15/hour.

Corporations are as profitable as they are by keeping workers’ wages stagnant.

Get used to it. One thing that isn’t about to change is the level of compensation for service-focused jobs and manufacturing professions. The pressure is down, not up. There are simply more qualified employees for every vacant job.

At the end of the day, politicians who are fighting for the average guy might be doing more harm than good. Instead of forcing employers to pay more than they’d want – which might cause layoffs – the role of government should be to help prospective applicants be trained, educated, and skilled.

The laws that brought us globalism wiped the middle-class. Now, the seeds of an unreserved business environment – which allow corporations to seek out the lowest labor regions, without any regard to the way people are treated in these markets – eliminate the need for American labor.

GDP growth is occurring, but the cost of it is too grave. Issuing debt is more than offsetting the benefits of having an economy with more products and services available, since less people can enjoy it. In other words, the world of possibilities has increased, but the ability to enjoy it by way of reduced purchasing power is making it impossible. It’s like you landed in heaven, and you can have anything you want, but all the spoils are locked with a code which you’re not able to access.

The rich have the code because the system favors them; but the majority only sees the wealth around them, never experiencing it for themselves.

The waters are not calm. The scope of today’s wealth gap is the precursor to social revolutions. The best investors in the world are BUYING gold, even in the face of a booming stock market. They understand that this is an artificial financial system.

We’re going to publish a critical alert next week, due to the explosion in the price of precious metals.

We’ve been waiting years for this.